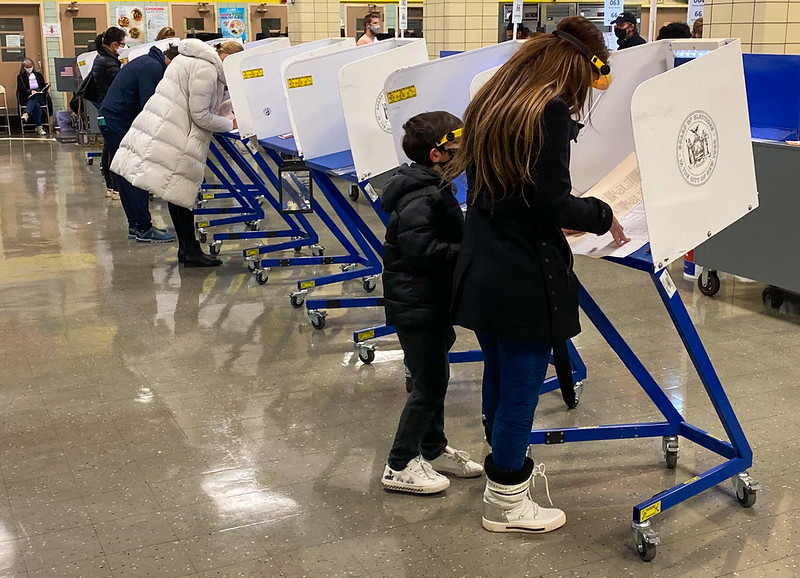 The New York City Board of Elections began tabulating preliminary, unofficial ranked-choice votes cast in this year’s primary elections on Tuesday, offering what was thought to be a glimpse of the possible result of races across the city even though more than 120,000 absentee ballots have yet to be counted at all. But not long after the BOE published its first preliminary ranked-choice runoff in the Democratic primaries for mayor and comptroller, it became evident that errors had been made and the Board eventually took down what it had posted to its website, citing a "discrepancy" in the numbers. The Board then indicated that it would provide new unofficial ranked-choice runoff tallies of the in-person votes on Wednesday.

Sources told Gotham Gazette and other outlets, first reported by Bob Hardt of NY1, that roughly 135,000 ballots entered into the counting system for a test run had not been cleared before the Board of Elections went to execute the actual first unofficial ranked-choice runoff of in-person votes, thus inflating and skewing the numbers and giving inaccurate tallies. The Board then confirmed those reports in a statement issued around 10:30 p.m. Tuesday, roughly seven hours after it had posted the erroneous RCV tallies to its website.

"The Board apologizes for the error," it said in its statement. The snafu is the latest in a long history of problems at the New York City Board of a Elections, a creature of state law with political appointees and patronage hires known for dysfunction and ineptitude in its core mission of running processes essential to local democracy.

So on Wednesday, the BOE is expected to run an accurate ranked-choice runoff of the roughly 800,000 in-person voters who cast ballots during early voting or on primary day, providing a new but still very unofficial tally to give some indication of how the mayoral race is unfolding, with 120,000-plus absentee ballots still to be counted and factored into another ranked-choice runoff sometime next week, with more counting to follow before a final, official count sometime around July 12.

Meanwhile, Brad Lander and Corey Johnson could each win the comptroller primary, for which an initial unofficial runoff was also posted then removed on Tuesday.

This month’s primary was the first ever citywide election with ranked-choice voting in place, allowing voters to rank up to five candidates in order of preference. On primary night, with only in-person first-choice votes from early voting and primary day were counted, many races remained undecided.

In the Democratic mayoral primary, Adams held the lead with 31.7% of first-choice votes on primary night. Wiley was in second place with 22.2% and Garcia was in third with 19.5%. (All other candidates appeared mathematically eliminated from contention no matter what the absentee votes, followed by the official ranked-choice running may eventually show. Under ranked-choice voting, the instant runoff is calculated if no candidate wins more than 50% of the first-rank votes.)

Along with the roughly 800,000 in-person votes in the Democratic mayoral primary, another 120,000-plus absentee ballots cast by Democrats had been received back to the Board of Elections by Monday, at least 13% of all Democratic votes, which will not be counted until next week and could significantly change the ranked-choice tabulation. That number could also grow. Any absentee ballots received by the BOE by the end of the day on Tuesday, June 29, will be considered valid if they are postmarked by or on June 22. The Board will then give absentee voters till July 9 to “cure” certain specific mistakes on their absentee ballots, before beginning the final, official count. There may be another unofficial, but very close to final, ranked-choice voting runoff performed with absentee votes included, less those pending “cures.”

Not long after the initial runoff numbers were posted, Adams issued a statement questioning the BOE for a major discrepancy in the vote totals posted on primary night and those counted in the RCV tabulation – the votes counted on Tuesday were roughly 135,000 higher.

"The vote total just released by the Board of Elections is 100,000-plus more than the total announced on election night, raising serious questions," Adams said. "We have asked the Board of Elections to explain such a massive increase and other irregularities before we comment on the Ranked Choice Voting projection. We remain confident that Eric Adams will be the next mayor of New York because he put together a historic five-borough working class coalition of New Yorkers to make our city a safer, fairer, more affordable place."

The BOE said on Twitter it was "aware" of the discrepancy and moving to resolve it. "We are working with our RCV technical staff to identify where the discrepancy occurred. We ask the public, elected officials and candidates to have patience," the Board said.

Once the Board acknowledged the problem in full and apologized, Adams issued another statement late Tuesday, saying, “Today’s mistake by the Board of Elections was unfortunate. It is critical that New Yorkers are confident in their electoral system, especially as we rank votes in a citywide election for the first time. We appreciate the Board’s transparency and acknowledgment of their error. We look forward to the release of an accurate, updated simulation, and the timely conclusion of this critical process.”

There is no evidence at this time of foul play or fraud, only of human error and incompetence.

Even before the chaos unfolded, Garcia -- who had looked in the erroneous numbers like she could defeat Adams in the RCV instant runoff once absentees are counted -- had also urged patience in counting all the votes. "Even with today’s ranked choice report we are still waiting for more than 120,000 absentee ballots to be counted and we are confident about a path to victory," she said in a statement. "Once all the votes are counted, I know everyone will support the Democratic nominee and that’s exactly what I intend to do. We look forward to the final results. Democracy is worth waiting for."

Wiley had expressed a similar sentiment, saying in a statement, "Democracy, as John Lewis said, is an act. And New York City residents engaged in one of the central acts of democracy! They voted. And they acted when they chose overwhelmingly to adopt ranked-choice voting. I said on election night, we must allow the democratic process to continue and count every vote so that New Yorkers have faith in our democracy and government. And we must all support its results."

In a statement late Tuesday evening, Wiley said, "This error by the Board of Elections is not just failure to count votes properly today, it is the result of generations of failures that have gone unaddressed. Sadly it is impossible to be surprised. Last summer BOE mishandled tens of thousands of mail in ballots during the June 2020 primary. It has also been prone to complaints of patronage. Today, we have once again seen the mismanagement that has resulted in a lack of confidence in results, not because there is a flaw in our election laws, but because those who implement it have failed too many times. The BOE must now count the remainder of the votes transparently and ensure the integrity of the process moving forward. New Yorkers deserve it.”

Garcia's statement issued late Tuesday evening said, “New Yorkers want free and fair elections, which is why we overwhelmingly voted to enact ranked choice voting. The BOE’s release of incorrect ranked choice votes is deeply troubling and requires a much more transparent and complete explanation. Every ranked choice and absentee vote must be counted accurately so that all New Yorkers have faith in our democracy and our government. I am confident that every candidate will accept the final results and support whomever the voters have elected.”

No matter what the accurate RCV runoff of in-person votes shows, the absentee ballots will be important, and must be counted before the official RCV runoff can take place. The order that candidates get eliminated is important, but it appears that ultimately the keys will be what kind of boosts Wiley, Garcia, and Adams get from each eliminated candidate, and then whether it is ultimately Wiley or Garcia who is eliminated, with the other in the final two with Adams and potentially getting pushed over the top depending on how the eliminated candidate's votes break between the remaining one of the two and Adams.

Based on an analysis of voting data by the CUNY Mapping Service, the New York Post reported Tuesday that Assembly districts where Adams was leading in first-choice votes returned 55,000 absentee ballots. Those where Garcia was leading returned 39,000, and for Wiley, the number was 17,000.

The comptroller primary will also see another RCV runoff conducted on Wednesday, and will also await absentee ballot counting and an official RCV runoff before Lander, who has a sizable lead from the in-person vote, or Johnson is victorious.

Several borough president races were also close on election night, with an initial, unofficial, preliminary ranked-choice runoff said to be expected on Tuesday, according to the Board of Elections, but which never transpired given the chaos of the mayoral and comptroller RCV runs.

Council Member Antonio Reynoso was in front in the Democratic primary for Brooklyn Borough President with 28.2% of in-person first-choice votes. His closest competitor is Council Member Robert Cornegy with 19.2%.

In Queens, Borough President Donovan Richards, elected last year in a special election, had a marginal lead on election night with 41.5% of in-person first-choice votes, with former City Council Member Elizabeth Crowley just behind him with 40.2%. Council Member Jimmy Van Bramer was in third with 17.8%.

Note - this article has been updated multiple times.