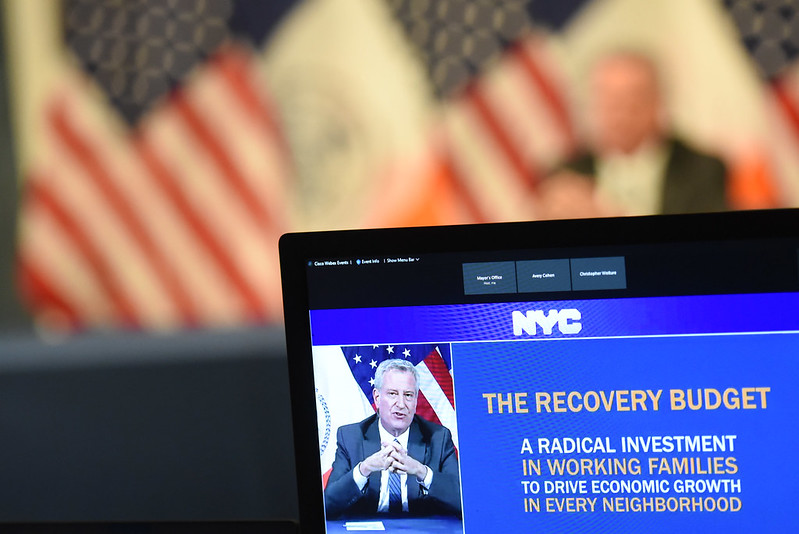 New York City’s budget has grown massively under Mayor Bill de Blasio and reached a record high of $98.7 billion for the current fiscal year. The latest spending plan, which the mayor dubbed a “recovery budget,” deployed a huge infusion of federal stimulus funds to restore services that were cut at the height of the COVID-19 pandemic, to expand existing programs, and launch new initiatives. But despite the mayor’s assurances that his successor, due to take office January 1, will inherit manageable budget gaps in the years ahead, fiscal watchdogs have expressed serious concerns about structural deficiencies.

Those include the criticism that, yet again, de Blasio pushed his administration to find few recurring operational savings that will help mitigate future financial trouble while adding new spending that may not be supported by federal aid or tax revenue, depending on many fluid pieces of the overall picture.

“It is a budget entirely focused on what it's going to take to bring this city back fully, bring back the lives of our people, jobs, livelihoods, revenue for our city, all of the above,” de Blasio said at an August 3 meeting with the New York State Financial Control Board, which monitors the city’s fiscal practices. “It is balanced and fiscally responsible with manageable out-year gaps,” the mayor said.

De Blasio painted an optimistic picture while acknowledging the lifeline provided by the federal government in the form of $6 billion in direct aid for the city to fill tax revenue gaps created by the pandemic and another $7 billion in education funding. But he also boasted of his administration’s budgeting policies and the reserves the city built up in the years before the pandemic.

“We survived the worst of the covid era until the stimulus was available because we had prepared long in advance for any potential type of downturn, even though you could not have possibly imagined the one we got,” he said. Those reserves, roughly $6 billion, were nearly depleted last year as the pandemic ravaged the city but the latest budget restored them to about $5.1 billion, including the first ever Rainy Day Fund, newly-authorized by state legislation, worth $500 million.

Nonetheless, the city foresees budget gaps of above or close to $4 billion in the next three fiscal years. By some estimates, the gaps are larger, since the mayor has yet to fulfil a promise to find $1 billion in labor savings.

In a report on the city’s financial plan issued last week, State Comptroller Tom DiNapoli warned of long-term risks to the city’s recovery and its budget. “New York City faces economic uncertainty as it emerges from the pandemic,” DiNapoli said in a statement. “The city must balance the expansion of services now with the ability to fund these services in the future. Recurring spending should match recurring revenue so the city can close its gaps and build back reserves. Taking these actions should help mitigate future uncertainties so the city may have greater flexibility down the road.”

Though the city did benefit from revenues that were higher than expected and lower costs of contributing to the city pension system, that also spurred new spending, DiNapoli pointed out. Both personal income tax revenues and lower pension expenses are “not guaranteed going forward and could be a source of budgetary volatility,” the comptroller’s report said. And looming on the horizon is the expiration of labor contracts with municipal unions, which could add additional recurring costs to the city budget.

The more immediate risk the city faces is the spread of the Delta variant of COVID-19, which threatens to stall the recovery if the city and state have to revert to restrictions that could throttle the economy. Several industries, such as tourism and hospitality, continue to struggle and any faltering steps to their revival could be undone by a new round of restrictions.

With those risks in mind, DiNapoli has recommended that the city add to its reserves and find more recurring savings, echoing the broad consensus among fiscal watchdogs.

As is the case each year, the mayor’s office issued a relatively concervative projection for revenue. City Comptroller Scott Stringer believes that revenues will be higher and that the city will end the fiscal year with a $1.13 billion surplus, also reducing future budget gaps. But he also pointed to several risks including funding for overtime costs, the Fair Fares discounted MetroCard program, spending on homeless shelters, rental assistance, and the unspecified labor savings.

“I don't think it's appropriate to take the view that we're going back to normal and the gaps will solve themselves,” Stringer said in a July appearance on What's The [Data] Point?, the podcast produced by Gotham Gazette and Citizens Budget Commission, a nonprofit fiscal watchdog.

“I think the mayor and the Council missed a real opportunity to start to think about what a post-pandemic New York will look like through the lens of our tax revenues,” he added.

Stringer noted that the current reserves are about 10.8% of city spending, and has for years called for increasing reserves to between 12-18%, or $9 to $13 billion a year. And he worried that the new $500 million rainy day fund does not have any safeguards. “There's no penalty for early withdrawal and I worry that when next year's budget or the next budget comes, it's going to be easy to tap that money for pork barrel spending rather than to hold it for real emergencies,” he said.

Ana Champeny, Citizens Budget Commission director of city studies, expressed concern that one-time federal stimulus funds are going towards recurring spending, “which we see as putting sort-of a really big fiscal cliff in the future for the city.”

“Our concern is that the gap and the challenge that the next administration is going to face is bigger than what's shown on paper,” she said.

CBC has urged the city to continue depositing funds in reserves each year to create an adequate cushion for potential future crises. “The amount of reserves that the city will need for the next crisis is still far greater than what they have,” Champeny said, noting that the administration increased new spending on city agencies by $1.5 billion and spent $516 million on City Council initiatives in the current budget.

James Parrott, an economist at The New School, has a more optimistic view of the city budget. He noted that fiscal rating agencies have recently issued improved outlooks for the city “from negative to stable.”

“You look at the rating agencies, look at the monitors. No alarm bells going off,” he said. “There's, you know, understandable caution being expressed.”

One of the major foundations of the city’s revenue is property taxes, which have helped keep the city afloat in previous financial crises but took a major dip during the pandemic. But, Parrott noted, the real estate market appears stable and on a path to recovery, so property taxes may not pose a risk next year. Commercial and office holdings remain a serious concern, though.

There’s also the possibility of additional federal funding in the coming years. A federal infrastructure program could help the city pay for the debt accrued from funding capital infrastructure projects every year, which is part of the annual operating budget. And additional federal funds for childcare, eldercare, and other social programs could also reduce the city’s annual spending on those fronts in terms of use of city tax dollars.

Another consistent cause of concern may also be irrelevant next year: the state budget. The mayor has, almost every year, had to push back against cuts and cost shifts from the state when it faces its own tough budget decisions. But the state’s future budget gaps are marginal compared to previous years, easing some of the tension that the next mayor will face come budget season. “There's always a risk that the state would try and offload more expenses on the city,” Parrott said. “That situation does not exist right now.”

Some, including DiNapoli and Citizens Budget Commission, have raised questions about increases in taxes on the wealthy that were included in the current state budget, which took effect in early April, and if that may contribute to any pandemic-era movement out of state by high-income individuals that could wind up undercutting tax revenues, but those results have yet to be seen. There are also questions about how remote work, return-to-office challenges, and other pandemic trends may impact tax revenues.

“I'm very concerned that unless the city responds in a more proactive way that we could be looking at two, three, four years of double-digit unemployment for African-Americans and Latinx people in New York City,” he said. “That's by far the biggest problem that we're facing, an unemployment crisis that is not going to lend itself to a quick recovery.”

Parrott urged the administration and City Council to prioritize workforce training and education programs, particularly to respond to changing job patterns caused by the pandemic.

“If [de Blasio] is seen as responsible for double-digit unemployment rates for Black and brown workers stretching into 2024, that I think really tarnishes his leadership legacy because I think it's a problem we can anticipate at this point,” he said.