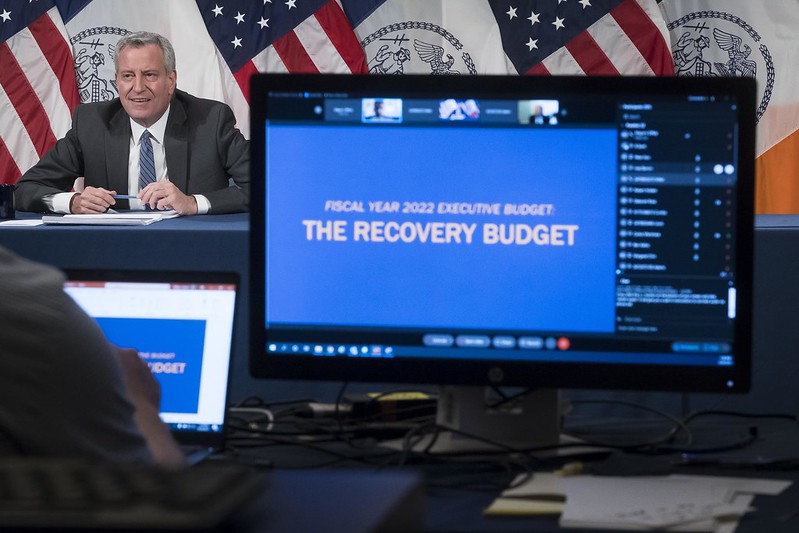 Since the March passage of the $1.9 trillion American Rescue Plan, the nation's most recent pandemic-era stimulus package, de Blasio administration officials have been crafting a plan to use close to $5.9 billion in direct federal funding to New York City government.

A new report from the de Blasio administration, required by the federal stimulus law, outlines how the city plans to spend the money.

The funding will be spread across five years (from fiscal year 2021 to 2025) for 45 projects ranging from healthcare infrastructure to housing assistance to educational support. The direct aid, known as "State and Local Fiscal Recovery Funds," or SLFRF, is part of a slew of federal pandemic payments to the city totalling an estimated $22 billion over the course of multiple stimulus packages under two presidents.

Those funds include FEMA reimbursements, "education stabilization funds" from the U.S. Department of Education, and payouts from the CARES Act, Centers for Disease Control, and American Rescue Plan.

While billions in federal aid had been flowing to the city, the American Rescue Plan funds were, according to Mayor Bill de Blasio, the key bailout the city's operating budget needed. He and partners had lobbied for many months, seeing new hope and realization under President Joe Biden and a Democratic Congress, with New York Senator Chuck Schumer installed as Senate Majority Leader.

"The American people want a real stimulus...to get us back on our feet...and that includes helping city and state government to be strong so we can serve people and lead the recovery," de Blasio said on January 29, just after Joe Biden was inaugurated as president.

The city had slashed city spending in the fiscal year 2021 budget to make up for billions of dollars in lost tax revenue during the pandemic. The city is putting the bulk of the American Rescue Plan’s SLFRF -- $2.3 billion, or 39% -- toward restoring lost revenue and supporting the restoration of city services, programs, and personnel that had been cut. Over $1.5 billion of the total fund was allocated for fiscal year 2021 and more than half of it, $3.4 billion, will be spent in the current fiscal year 2022, according to a Mayor's Office spokesperson.

The next three fiscal years, which will unfold under the next mayor and City Council, set to take office in January, will see $283 million, $226 million, and $452 million of the funding, respectively, under the de Blasio administration’s plan.

After Congress passed and President Joe Biden signed the American Rescue Plan, de Blasio called it "the single biggest shot in the arm for the American people since the New Deal."

The $5.9 billion is broken down into four broad categories outlined by the U.S. Treasury Department: restoring lost city revenue, mitigating the pandemic's economic impact, addressing public health, and providing services for disproportionately impacted communities. In a pandemic that touched nearly every aspect of public and private life -- more so in some communities than others -- the city will need that to cover a lot of ground. The de Blasio administration report notes that projects may "evolve over time" as city officials continue to assess needs.

After replacing lost revenue, the next largest spending categories are “negative economic impacts” and “public health.” Each makes up about a quarter of the SLFRF spending under the city's plan.

While services for the hardest-hit communities is the smallest of the four major categories of the SLFRF as outlined in the mayor's office report -- 11%, or $650 million -- many of the other categories include programs aimed at underserved communities. Over $300 million of the SLFRF will go to community-based organizations serving low- and middle-income neighborhoods, according to the report, for a range of services and messaging around city efforts like vaccine services, food assistance, and mental health support.

Thirty city agencies are being tapped to carry out projects using the funds. As of the report's August 31 publication date, they have spent roughly $475 million. Many of the projects are recognizable in the most recent city budget, totalling $98.7 billion and dubbed by de Blasio the "recovery budget," which was enacted at the July start of fiscal year 2022. While the current city expense budget and separate capital infrastructure spending plan outline some expenditures of federal funds in future years, final decisions will be made by the next mayor and City Council, due to take office in January.

The 72-page report breaks down the funding categories and lists the agencies and programs that will be supported by the relief. It states the SLFRF spending will be updated annually.

Tax Revenue Replacement
The largest slice of the SLFRF -- nearly $2.3 billion, or 39% -- is slated to go to replacing tax revenue lost during the city's covid-induced economic downturn to ensure the continuation of essential city services. Of that funding, the de Blasio administration plans to spend $1.7 billion to maintain the salaries of correction officers, sanitation workers, and fire department officials (including EMTs and building inspectors). Another nearly half-billion dollars will go to waste collection.

Around $42 million will be used to support the Emergency Food Assistance Program, which has become a lifeline for 10 million New Yorkers annually, including individuals and families who have lost income and housing security as a result of the pandemic, according to the city. The SLFRF is currently positioned to shore up the program for the current fiscal year through June 2026.

Other revenue replacement funds will go toward the Build It Back program for Hurricane Sandy recovery and environmental resiliency projects. Some crisis support programs, de Blasio's Vision Zero street safety initiative, and the state-mandated Conditional Release Commission, which can determine the release of individuals incarcerated in city jails, will also receive federal funding.

Pandemic Economic Impact Mitigation
Roughly a quarter of the SLFRF, or about $1.5 billion, will go to supporting workers and small businesses in the industries most severely impacted by the pandemic, the de Blasio administration says in the report. Much of that will go to food, rent, and mortgage assistance to impacted families.

The de Blasio administration plans for about $329 million to go to rental assistance vouchers and another $62 million is slated for legal support for tenants facing eviction.

Another large piece of the funding will go toward the "New Deal-style job creation" de Blasio has touted as part of the recovery budget. That includes $230 million for the City Cleanup Corps, intended to employ 10,000 workers, targeting residents in the 33 neighborhoods identified by the city's Task Force on Racial Inclusion and Equity as hardest hit by the pandemic. About $156 million will go towards the salaries of 536 public employees across 27 agencies "associated with a hiring and attrition management policy change," the report states.

The city's Public Health Corps will receive $50 million and to the Summer Youth Employment Program another $13 million in federal funds. Some of those also include workforce development funding and the SLFRF contains an additional $5.5 million for job training, and $170,000 will go to the NYCHA Food and Catering Business Pathways programs for a targeted 300 public housing residents to start their own food businesses.

About $172 million will go towards small business assistance in the form of grants and loans administered by the city’s Department of Small Business Services. The fund also contains support specifically for the tourism, travel, and hospitality industries to the tune of $53 million "to promote local, regional, national and international visitation through marketing campaigns, branding, and sponsorships." Another $20 million will go toward making the city’s Open Restaurants program permanent, and $25 million in grants and other aid will go to the arts.

The Taxi Medallion Relief Fund for the distressed driver-owners in the yellow cab industry will get $65 million.

Public Health
Public health spending of $1.45 billion makes up another quarter of the New York City SLFRF. A large portion of that will go toward the payroll costs of COVID-19 responders.

Another $450 million will go toward mental health services. Around $163 million has been outlined for senior support services. And nearly $73 million is currently intended for covid mitigation strategies in congregate living facilities, like nursing homes, prisons and jails, as well as dense work settings and schools.

The city's test and trace program is slated for $328 million and vaccine operations another $21 million. Covid-related payroll expenses at the city’s Departments of City Administrative Services (DCAS), Information Technology (DoITT), Small Business Services, and other agencies could take as much as $441 million of the SLFRF.

The city's emergency supply stockpile -- the cache of personal protective equipment and other medical supplies developed by late 2020 in response to the first wave of the pandemic -- will take close to $1 million in SLFRF. That includes the costs of replacing perishable items in fiscal year 2022.

Services for Hard-Hit Communities
Services for hard-hit communities, predominantly comprised of Black, Latino, and immigrant residents, makes up the smallest of the four sections of the SLFRF breakdown, 11% or $650 million. More than half of that will go towards education assistance and shrinking the so-called achievement gap, which is said to have been exacerbated by the pandemic's disjointed school years. That includes both educational support and school-based health programs.

About $150 million of this category is intended for children's services, more than half of which includes child care. Another $124 million will go to housing assistance for homeless New Yorkers.