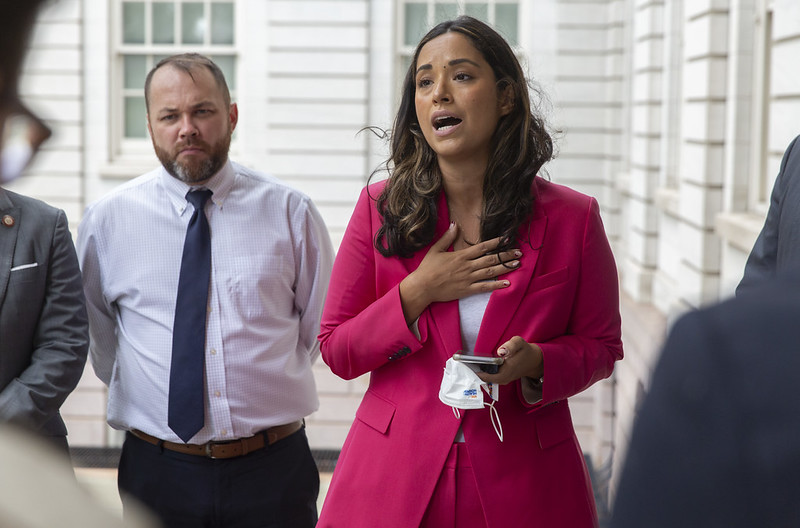 “We have these populations of New York City that just alarmingly have not been vaccinated,” said City Council Member Carlina Rivera, a few days after co-chairing a recent Council oversight hearing on vaccine hesitancy and equity. “Like you can look at New Yorkers who are aged 85 years and older — they have the lowest vaccination rate of all age groups, there's only 58% of them that are fully vaccinated. These are some of our most vulnerable in our elders in the community. And Black New Yorkers also have low vaccination rates; they're about 39% fully vaccinated.

While there is an abundance of vaccine supply, there is still a lot of vaccine hesitancy, Rivera noted. “So, we wanted to hear from the administration, from our city health leaders, what we're doing to reach communities of color, immigrant communities, religious communities, and talk about how the lack of confidence in the vaccine; there's a lot of factors into why people are hesitant, why there's a lack of confidence.”

Rivera, a Democrat who represents City Council District 2, which includes parts of Manhattan’s Lower East Side, appeared on a recent episode of the Max Politics podcast from Gotham Gazette and discussed the two latest City Council oversight hearings she chaired, vaccine hesitancy and equity, the city’s public hospital system she has oversight of as chair of the Council’s hospitals committee, NYPD reform, her legislative priorities for the final months of this term, her bid to become the next Council Speaker, and more.

“If we're going to put into effect, that you either have to be vaccinated, or you have to be tested, there also has to be infrastructure,” Rivera told host Ben Max. “So that way those tests can happen, and that people feel like they have the access to those resources. And I think that hasn't been happening.”

Rivera also pointed to some issues of consistency and infrastructure around vaccine mandates from the de Blasio and Hochul administrations at the city and state levels. “And you've heard those concerns from labor,” she said. “You've heard that from kind-of the average worker who either has to spend time getting on line getting their tests, or some of the at-home kits, which are prohibitively expensive.”

When asked if she is worried about the impact of the vaccine mandate on the public hospital system, Rivera pointed to the need for people to be receiving the full spectrum of care, saying, “I think we just have to get to a place where people feel confident enough to walk into a hospital. I think, based on the conversations that I've had with my constituents and with people, is that people need to get to services and see their primary care physicians, because the lack of preventative medicine that has transpired, I think it's resulting in New Yorkers getting very, very sick and being diagnosed at late stages, where I think 18 months ago, a screening could have made all the difference, it could have made a difference between life and death.”

With the pandemic raging, tens of thousands dead, long work hours, student debt, a hazing culture, and lack of mental health services, there are many medical professionals that are suffering from anxiety, depression, and suicidal thoughts, Rivera explained. She and her Council colleagues had a hearing on this topic prior to the recent vaccine-focused hearing.

“There was a survey done by the Committee on Interns and Residents of 700 residents,” Rivera explained, “What it points to, this data, is doctors are two times more likely to commit suicide than those of other professions. 10% of fourth-year medical students and first-year residents report having suicidal thoughts. And we have to think about how we're taking care of the people inside of these facilities.”

She adds, “So they're asked to do a ton of responsibilities, which they don't mind doing, but it does prevent them from giving more attention and the care that they want to provide to their patients. So we do have to address the culture inside of some of these facilities and how we are making sure that the workers are taking care of themselves.”

When asked her thoughts on the NYPD budget and the debate in the Council and more broadly about shifting funding and responsibilities away from the NYPD, Rivera took a measured tone, despite having previously been a vocal proponent of significantly reducing police funding and voting against the city’s fiscal year 2020 budget because it did not go as far as she wanted to do so.

“I do think we have to look at how the NYPD functions as a whole, what we can do differently,” said Rivera. “It is just such a large organization with so many different responsibilities and a huge budget. How can we make sure that people feel safe in the city? Everything I do is community led, so how do we make sure we're also funding the groups, the workforce opportunities. That's what I'm trying to do as I continue to listen to the neighbors in my district.”

In terms of recent and upcoming legislative priorities, Rivera highlighted the deliveristas package of bills the Council recently passed and the mayor plans to sign that include a series of new protections for food delivery workers, giving them access to restaurant bathrooms, minimum delivery payments, additional choices in their assignments, and more.

She is now eyeing passage of her bill to update the Gender Motivated Violence Act, which was originally passed 20 years ago, to allow survivors of sexual assault to file civil actions even if the statute of limitations on criminal liability has expired. And, in the final months of the current term, Rivera wants to pass her Community Opportunity to Purchase Act, which would require residents and city-approved nonprofits be given the first chance to buy residential buildings with three or more apartments when they are put up for sale.

Rivera is up for reelection this year and hopes to not only win another term, but then be selected in January by her peers as the next City Council Speaker, one of the most powerful positions in city government. She won her primary and must now win the general election (she recently declined to debate her opponents), while she, like her competitors for the speakership, have been running for speaker for months, if not years.

“I think the results of June's primary election show that qualified, thoughtful women are ready to take the Council in a new direction,” Rivera said when asked to reflect on the results, which appear to show that the next Council class will have a female majority. “I think, if you look at citywide races, I would also say that our leaders continue to be entirely male with no Latinos in those positions either. I'm a proud Puerto Rican woman. This victory demonstrates, I think, why a woman should be, must be the next Speaker of the Council. I think it's not just about checking a box. Since I took office, I've been so frustrated to see women in the Council forced to staff more committees than our male colleagues, just to get even remotely close to equitable gender representation. And studies show that women just to be, you know, blunt about it, they're better at getting shit done.”

“Well, I believe that with a woman and a woman of color at the helm that we can finally address inequitable healthcare outcomes for women, I think particularly women of color, maternal mortality and morbidity,” she went on to say. “I think we can fight for better pay and workplace conditions for working class immigrant women, home attendants, delivery workers. And we can connect women of color and opportunities in growing fields, like tech, the life sciences, biotech all where we have been largely excluded.”

“And what I tell my colleagues coming in or, you know, my current colleagues,” Rivera continued, “is that this is a very, very unique opportunity, I think, to lead a majority women Council and I think a woman is the most appropriate, but I also think we have to pick a person that's going to lead a body that represents all of New York City, all New Yorkers across all five boroughs.”

Rivera continued to tie her pitch for becoming the next speaker to her own record as a Council member.

“Women legislators are more likely to introduce legislation that specifically benefits minority communities, they're better at securing funding for their home communities, and then Congress, they've passed twice as many bills as male legislators,” Rivera said. “So, I think that we are going to get some great things done. I mean, I've introduced and passed dozens of bills. I've held hospitals accountable during the COVID-19 pandemic. And I've pursued pioneering projects in my district: the city's first tech training center, the first busway, the first major climate resiliency project. So, I think having these women who know the needs of their community, and as they lead with courage and compassion, I think we're going to be able to deliver some real results for New Yorkers. And I'm excited.”

With Eric Adams, a moderate Democrat, likely to be the next Mayor, Rivera believes the next Council needs to be both a strong partner and a progressive balance.

“There is no doubt that the Council is meant to be a check on the mayor,” she said when Max asked if part of her pitch to her colleagues to become Speaker is that she can be a leader of the Council as a progressive counterweight to a more moderate Mayor. “I have no interest in a constant fight. I want to be productive so we can find that balance where we're able to put forward an agenda that is unquestionably progressive.”