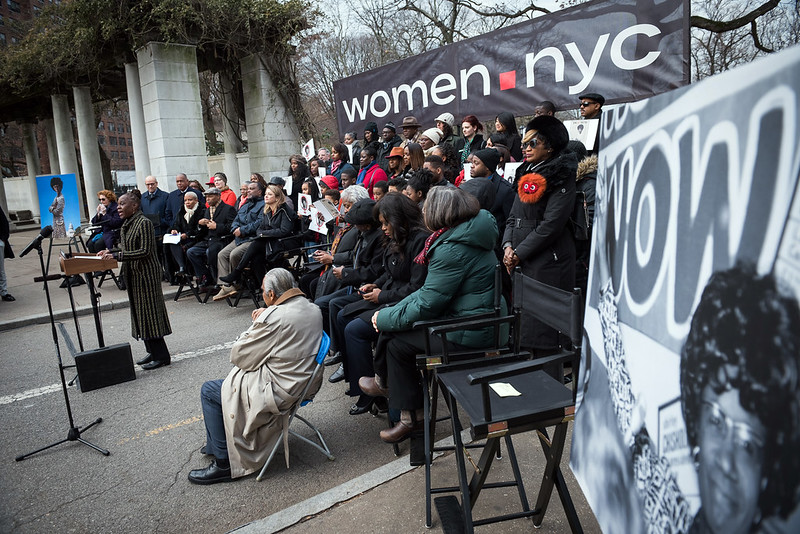 At the height of the pandemic last year, as the city was forced to shut down, all design and construction projects were frozen including an initiative to build monuments of famous women from New York’s history. The first of those monuments, honoring Shirley Chisholm, the first Black woman to become a member of the U.S. House of Representatives, was intended to be built by the end of 2020. But, while the design process has resumed, there seems to be no certain timeline for its completion and it seems unlikely that it will be completed this year.

The program grew out of Mayor Bill de Blasio’s Advisory Commission on City Art, Monuments, and Markers, which he created in 2017 to address the lack of diversity in the city’s public art and to examine the history of monuments on city property.

“Congresswoman Shirley Chisholm’s legacy of leadership and activism has paved the way for thousands of women to seek public office,” McCray said at the 2018 announcement, made on the 94th anniversary of Chisholm’s birthday and the 50th anniversary of her election to Congress. “She is exactly the kind of New York woman whose contributions should be honored with representation in our public spaces, and that is now being realized with She Built NYC.”

Brooklynite Chisholm was the first woman to be honored, they announced in November 2018, with a statue at the Parkside entrance to Prospect Park. In April 2019, the city announced that artists Amanda Williams and Olalekan Jeyifous had been selected to design it. A year later, the project was stalled because of the pandemic. Williams and Jeyifous could not be reached for comment.

“Putting up statues doesn’t change everything but it sends a powerful message,” de Blasio said in May 2019, when the statues honoring Johnson and Rivera were announced. “It starts to change things. It starts to change hearts and minds.” The delay of the Chisholm statue, however, is among a number of initiatives that the de Blasio administration has failed to deliver on time or at all, largely blaming the pandemic for halting city business.

Earlier, in 2018, the city also removed a statue of Dr. J. Marion Sims from Central Park. Sims, considered the “father of modern gynecology,” experimented his surgical techniques on enslaved Black women without anesthesia. In October 2019, the city chose Vinnie Bagwell, a Black artist, to build a statue to replace Sims. That project was also disrupted last year.

A spokesperson for the Department of Cultural Affairs said in an email that the design process for both the Chilshom monument and the “Victory Beyond Sims” statue have resumed. The projects have roughly $1 million in funding to cover costs. But the timelines for the statues remain unclear. “Public art project timelines vary widely based on a range of factors specific to each commission; from the design phase to installation typically takes from 16-24 months,” the spokesperson said.

The She Built program came amid a national reckoning of the controversial history of many of the monuments across the country, particularly those of Confederate leaders. In New York City, in 2017, there was a crescendo of voices calling for the removal of the statue of Christopher Columbus from eponymously named Columbus Circle, with many powerful voices opposing the move. At the time, Mayor de Blasio, running for reelection, refused to take a stance on the statue and punted to the Commission he had created. The Commission eventually recommended that the statue should remain in place but should also include new markers explaining Columbus’ history, and that the city would build a new monument honoring Indigenous peoples.

The city continues to confront similar issues. Last week, at the request of the City Council’s Black, Latino and Asian Caucus, the Public Design Commission unanimously voted to remove a statue of founding father and slave owner Thomas Jefferson from the City Council chambers at City Hall. The commission has not yet decided where the statue will be relocated.

But the decision is already being met with opposition and has become an issue of debate in the ongoing general election for mayor and other offices. Both major party nominees for mayor and public advocate were asked about the removal at official debates last week.

Brooklyn Borough President Eric Adams, the Democratic mayoral nominee, and Public Advocate Jumaane Williams, a Democrat running for reelection, both supported the removal of the statue.

“The question is why is it there in the first place,” Williams said at a debate on Tuesday.

Republican mayoral nominee Curtis Sliwa and Dr. Devi Nampiaparampil, the Republican nominee for public advocate, both opposed it. “Absolutely not,” Sliwa said at the first official mayoral debate on Wednesday, when asked if the statue should be removed, “although they've made their decision. The idea now would be to repurpose and find a place for Thomas Jefferson, who created our Declaration of Independence.”