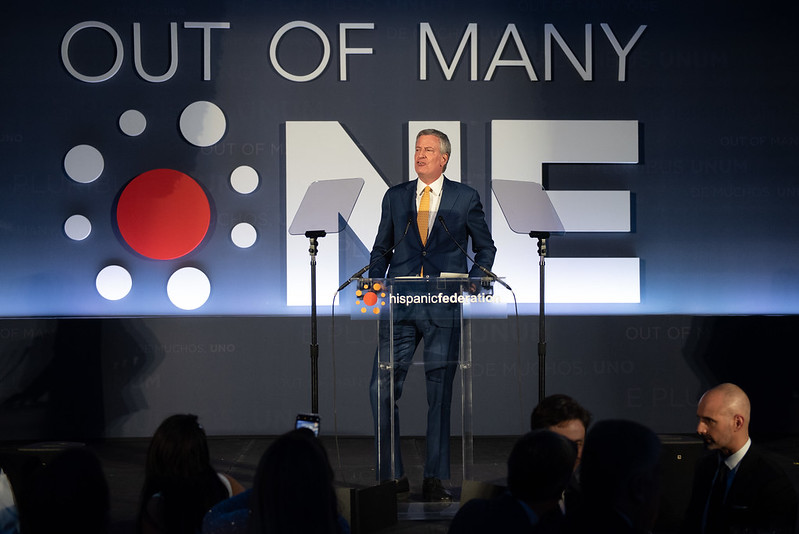 With a new mayor and other city leaders set to take office January 1, the Hispanic Federation has released a “blueprint” for improving how local government serves New York City’s 2.3 million Latino residents.

A nonprofit with 70 member organizations from all five boroughs, the Hispanic Federation issued its recommendations at a virtual press conference on Tuesday, hours before the final debate of this year’s mayoral election, between Democratic nominee Eric Adams and Republican nominee Curtis Sliwa, which it was co-sponsoring.

Specific recommendations of the blueprint include items like ensuring that the next New York City Council Speaker is Latino and increasing New York City’s Nonprofit Stabilization Fund to $50 million over a five-year period to support people of Latino-led nonprofit organizations.

“[COVID-19] has attacked our friends, caused families to mourn the loss of loved ones, skyrocketed economic instability to levels not seen in generations, closed businesses, and left a learning gap among our children,” said Frankie Miranda, President and CEO of the Hispanic Federation and host of the event, at the Zoom press conference. “La Gran Manzana clearly outlines how our government can take bold action to meaningfully empower Latinos and support a comprehensive, fair and equitable recovery from the pandemic across the socio-economic spectrum.”

He was among a number of Latino organization leaders, also including Maria Lizardo of the Northern Manhattan Improvement Corporation, Marco Carrión of El Puente, and Arnaldo López of the Puerto Rican Traveling Theater, and others, who contributed to the report and discussed it at the release.

“We're really at an inflection point of what good governance can look like in this vibrant city and this is our opportunity, and our responsibility even, to create the peace in our families and in our communities that we deserve,” said Margarita Guzman, executive director of Violence Intervention Program, a member organization of the federation and one of the press conference panelists.

The disproportionate impact the COVID-19 pandemic has had on New York’s Latino community, exacerbated by and exacerbating existing inequalities, is an overarching theme in the Gran Manzana (Big Apple) blueprint and throughout the press conference.

Several keys to reducing those inequalities that are included in the report are increased protections for immigrant workers, expanding loans for small businesses hurt by the  pandemic, and pushing for affordable housing and eviction protections.

A key recommendation in the blueprint is the call to increase New York City’s Communities of Color Nonprofit Stabilization Fund to $50 million over a five-year period and fix issues with the administration of the fund, which provides grants to Black, Latino, and Asian-led nonprofit organizations throughout New York City that are currently serving communities where 51% are people of color and have a budget between $150,00 and $2 million. Organizers believe additional investments in such groups will galvanize more community action and build bottom-up change positively impacting Latino communities.

“New York City is long past the time when it must understand that the nonprofit sector is not only a key instrument of social change and stability, but also an economic force and multiplier in Latino communities,” the blueprint says. “The next Mayor and City Council must significantly reform the current system of contracting so that organizations do not flounder.”

At the press conference, organizers also spoke about the need to address public health issues impacting New York’s Latino community. With historical health disparities and the highest uninsured rates of any racial or ethnic group in the United States, the COVID-19 pandemic further exposed glaring healthcare challenges for Latinos in New York City, as well as other conditions like poverty and overcrowded housing that made low-income Latinos more susceptible to the highly-transmissible virus.

“We hope that the incoming administration will also embrace a commitment to erase health disparities in our city, to be an example about rebuilding a new city healthier, and also putting the wellness of our communities — not only Hispanic or Latinx, all New Yorkers — as an example to follow,” said Guillermo Chacón, Founder of the Hispanic Health Network and President of the Latino Commission on AIDS, who was one of the press conference panelists.

“It is important that the city remedy the discriminatory practices in the Department of Education’s gifted and talented program and in its specialized high schools, and lay out a clear and accountable plan to dramatically and immediately improve the recruitment, admission, and retention of Latino students who are woefully underrepresented in New York’s most prestigious secondary schools,” said Soledad Hiciano, Executive Director of the Community Association of Progressive Dominicans, at the virtual press conference.

Another focus area highlighted at the event releasing the blueprint is the Federation’s call to create new support systems for immigrants in New York City. This, the document says, includes stopping wage theft from undocumented workers, assuring immigrants that the city will not cooperate with federal agencies like Immigration and Customs Enforcement (ICE), and supporting integration services.

“Without these increased protections and the proper support, that flame that our communities emit to light up the city and continue to make it the capital of the world is going to flicker,” said Alba Villa, Executive Director of the Coalition for Immigrant Freedom, at the press conference.

With the recommendations unveiled, Miranda turned his attention to the work he says the city’s Latino community must do through Election Day, November 2.