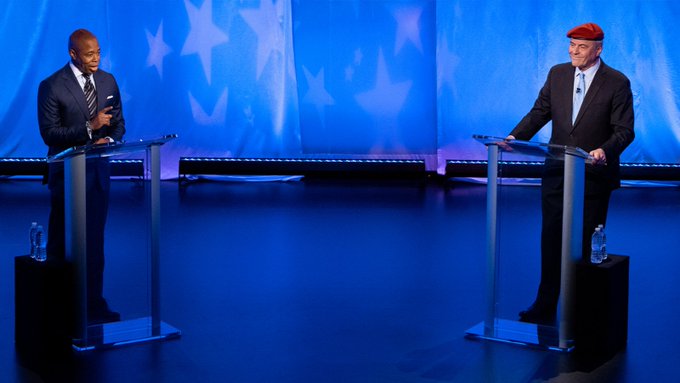 Eric Adams, left, and Curtis Sliwa, at a mayoral debate

Candidates Eric Adams and Curtis Sliwa confronted each other on Tuesday at the second and final debate of the general election for New York City mayor.

The debate was co-hosted by the Campaign Finance Board, WABC-TV, The League of Women Voters of NYC, Univision 41 Nueva York, Hispanic Federation, and NAACP NYS Conference. Early voting is ongoing through October 31 and Election Day is November 2. There are about a half-dozen other candidates on the mayoral ballot as well as races for all other city government offices.

On Tuesday night, the two major party nominees for mayor largely trod the same ground as the first debate one week ago, clashing on issues that included vaccine mandates, homelessness, policing, congestion pricing, outdoor dining, taxi medallions, and more, with scattered moments of agreement between the two.

Sliwa, a radio host and founder of the Guardian Angels, aggressively attacked Adams, the Brooklyn Borough President, on a range of issues. He attempted to tie Adams to incumbent Mayor Bill de Blasio, a fellow Democrat whose popularity has waned over his two terms in office. Sliwa, a Republican, repeatedly blamed de Blasio for the problems plaguing the city and extended that to Adams, calling him the mayor’s “partner” and “teammate” at several moments during the debate.

Adams, however, refused to take the bait on a wide variety of topics and attacks, and calmly remained focused on the camera throughout Sliwa’s broadsides while repeatedly touting specific items from his campaign agenda.

Adams and Sliwa do share some areas of consensus when it comes to certain issues around policing and education. The two candidates have both run campaigns centered on public safety and crime and, for example, they support increased use of stop-and-frisk policing if it is employed in a constitutional manner. The controversial policing tactic was heavily utilized by the NYPD under former Mayor Michael Bloomberg and widely criticized for unconstitutionally targeting mainly Black and Latino young men.

Asked about an example of a proper use of stop-and-frisk, Adams, a former NYPD captain, defended the practice just after recounting how its use had traumatized his own son. If a New Yorker calls police with a reasonable suspicion – say a man with a gun in his waistband outside their house – Adams said the officer “has an obligation to stop this person, question this person, and if it escalates to another level, then he can frisk this person.”

He contrasted it with how it was used under Bloomberg, alleging the NYPD used quotas in Black and Latino communities. “That is an abuse of a tool,” he said. “A tool that's abused is no longer a tool, it's a weapon.”

Sliwa attempted to undercut Adams’ claim to be the “law and order” candidate, pointing to an interview that Adams gave on 105.1 FM’s the Breakfast Club on Tuesday morning. In the interview, Adams said he would “collaborate” with gang members to curb violent crime in the city. At the debate, Adams explained the statement as part of his “intervention and prevention” approach to crime, insisting that he wants to extricate people from gangs and rehabilitate them. Sliwa said those gang members should instead be stopped and frisked by police, “because they're the ones in retaliatory shootings and drive-bys that are causing people to have to live in solitary confinement in their neighborhoods.”

It was one of Sliwa’s many direct criticisms against Adams. Sliwa also pressed him on questions around his residency, his repeated amendment of his tax returns, his hobnobbing with wealthier New Yorkers while running to be the city’s “first blue-collar mayor,” his friendly associations with the real estate industry, and more. Adams almost exclusively looked into the camera and smiled, and repeatedly declined to respond, even when offered the chance by the moderators.

It was the second straight debate where Adams declined to shed more specific light on how often he sleeps at the Brooklyn apartment he says is his residency versus the New Jersey apartment he co-owns with his longtime partner. Nor did Adams address whether he is taking steps to deal with city inspectors who've sought to look at his garden-level dwelling.

Adams did break his focus a few times: telling Sliwa to be more "disciplined" when he was going over his allotted time and smiling when, in a round of questioning where the candidates were asked to say something nice about the other, he looked at Sliwa and smiled after Sliwa had credited Adams for promoting healthfulness. Adams had praised Sliwa for his focus on animal welfare.

There were few other similarities between the two. Both candidates want to reinstate a version of a plainclothes police unit that was disbanded by NYPD Commissioner Dermot Shea last year because of a history of misconduct and abuse of power. And the two candidates also oppose the phasing out of the Gifted and Talented program at city schools, which Mayor de Blasio announced earlier this month in favor a of a universal acceleratd learning plan. Both candidates have said they would retain and expand the program.

Throughout the hour-long debate, the candidates reiterated the positions they took at the first debate. Adams supports vaccine mandates for municipal employees, congestion pricing, outdoor dining, and expanding bike lanes, while Sliwa opposes all of those.

Asked to grade Mayor de Blasio’s two terms in office and his biggest successes and failures, Sliwa offered a scathing critique, though he did praise the mayor’s successful universal prekindergarten program. “Is there a grade below D-minus? F,” Sliwa said. “The guy has been a miserable failure. He has single-handedly taken a Miley Cyrus wrecking ball to the city that we love.”

Adams gave the outgoing mayor -- a longtime ally who is said to have quietly helped Adams in the primary and publicly endorsed him in the general -- a much more favorable rating. Adams praised UPK and the IDNYC municipal identification program but said the mayor could have done better on homelessness and finding efficiencies in city agencies. “Cities are based on the success of agencies. We’re too siloed, we're hemorrhaging too much money and I want to turn that around now,” he said. “I would give him a B-plus as a grade.”

Even as the city continues to bounce back from the recession caused by the pandemic, the municipal budget reached a peak of nearly $99 billion this year thanks to a massive infusion of federal funding. In the three fiscal years ahead, budget deficits are projected to reach nearly $5 billion. At the debate, Adams did not pledge that he would not seek tax increases but did offer solutions to cut spending. He said he would institute a program to eliminate the gap (PEG) requiring between 3-5% cuts at city agencies without making any layoffs. “We’re too bureaucratic, too expensive and too difficult to do business in,” he said. “We can turn around this economy by number one, looking after the families, getting them employed. And number two, have a more efficient government.”

Sliwa said he would immediately find more funds by cutting ThriveNYC, the signature mental health initiative led by First Lady Chirlane McCray, which has shown limited results while spending upwards of $225 million per year and has been rebranded in recent months after multiple shake-ups over the years. Sliwa said he would cut down the bureaucracy at the Department of Education and redistribute funds from central office to schools. And he said he would cut taxes by opposing congestion pricing and getting rid of speed cameras. “That’s a hidden tax,” he said.

An issue that has slowly gained momentum in recent years and was raised repeatedly throughout this year’s mayoral race is the question of allowing noncitizens with work authorization and permanent residency to vote in municipal elections. City Council Member Ydanis Rodriguez, a prominent Adams ally, introduced the “Our City, Our Vote” bill before the Council to achieve that goal. Mayor de Blasio said in September that he has “mixed feelings” about the proposal and that his Law Department determined that it would need approval from the state Legislature.

At Tuesday’s debate, Adams reiterated his support for the proposal but in a shift parroted de Blasio’s line on state approval. “Hopefully, the state lawmakers will look at that and make a determination of what's the best thing for the city,” he said, citing the Law Department’s analysis.

Sliwa opposed the idea and bizarrely segued to falsely say Council Member Rodriguez has been living in the United States as a permanent resident on a green card. “You have to ask yourself, why after all this time would Ydanis Rodriguez not want to be a citizen of the United States?” Sliwa wondered.

Rodriguez, who is originally from the Dominican Republic and became a citizen in 2000, quickly responded to the attack on Twitter. “This was completely offensive to all immigrant New Yorkers who live in NYC but were born and raised in another country,” he wrote.