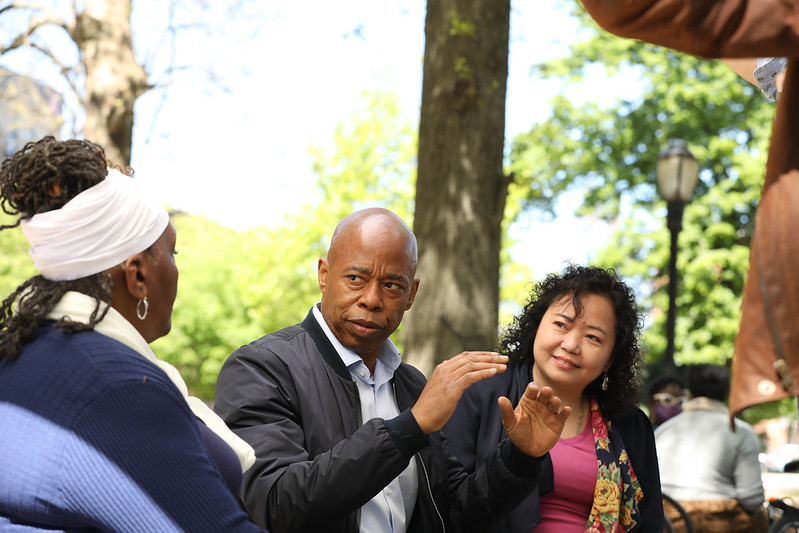 When Mayor Michael Bloomberg put the prospect of nonpartisan or "open" primary elections before voters in 2003, Eric Adams was a vocal supporter of the shift. This year, when Adams narrowly won the Democratic primary and, in part thanks to Democrats' overwhelming voter enrollment advantage, sailed to victory in the general election to become the next mayor himself, he's been much quieter on the topic. That's because he no longer supports it.

When asked in a questionnaire from good government group Citizens Union this spring, Adams said he opposed getting rid of the current party primary system in favor of a single primary open to all registered voters where the top two vote-getters would advance to the general election.

"No, I support the political party system in NYC," he wrote in the questionnaire.

That's a shift from his 2003 stance, when Adams penned a statement of support for a proposed City Charter amendment to eliminate partisan primaries in a government voter guide.

"It is in fact an opportunity to open up the electoral process so all New Yorkers could participate," he said in a statement to the New York City Campaign Finance Board, acting as the co-founder of 100 Blacks in Law Enforcement Who Care, a police reform group. "Our system of elections cannot continue to lock out legal registrants who decided that they do not want to be affiliated with any party, but rather want to vote based on the issues."

Proponents say nonpartisan primaries would increase competition in primary and general elections and force candidates, especially the Democrats favored to win, to reach beyond their base. The proposal gets bandied about after each blowout or low-turnout election, like this year's general, which was both.

In 2003, Adams, having explored a run for Congress a decade prior, was getting closer to the campaign for state senate that would eventually lead to the borough presidency and now mayor's office. He was a registered Republican from 1995 to 2002 before returning to the Democratic Party. Bloomberg had made nonpartisan primaries a central campaign platform in 2001, having himself recently changed affiliations from Democrat to Republican. Less than two years into his tenure as mayor, 70% of voters opposed the referendum in what was itself a low-turnout off-year election. Adams received Bloomberg's endorsement this year and regularly cites him as a model.

For the last three post-Bloomberg mayoral elections, traditional wisdom has held that the winner of the Democratic primary will win the general election, and that’s what has happened each time by a wide margin. Registered Democrats outnumber Republicans nearly seven-to-one and the share of Republican elected officials in New York City has over the years dwindled to a very small number. The latest election this fall was no exception, with Adams beating Republican Curtis Sliwa by more than 37 percentage points. And while Republicans are poised to pick up a couple of City Council seats they are still without any significant power in city government.

Now, a number of members of New York's political class and media have again begun publicly contemplating ways to incorporate the 1.8 million unaffiliated voters, Republicans, and other party members into more meaningful, competitive elections that also attract higher percentages of Democratic voters. Even the highly-competitive Democratic primaries for mayor tend to see turnout of roughly 25%.

"As a good Democrat I was firmly opposed to nonpartisan elections in 2003. I was just wrong. You have to want as many people to vote as possible in the decisive election," wrote David Yassky, a former City Council member, on Twitter.

Close general elections for mayor have been in decline for the past decade, since Bloomberg narrowly won a third term, spending record sums of his fortune to do so. In the 2017 race between Mayor Bill de Blasio and Republican nominee Nicole Malliotakis, de Blasio won with similar margins as Adams. Four years earlier, he beat Republican Joe Lhota with close to three-quarters of the vote for the open seat left by Bloomberg. (Lhota later left the Republican Party, citing his distaste for Donald Trump as the head of the GOP and how many party members have supported Trump. He registered as a Democrat ahead of the 2021 mayoral primary in order to have a say in the only election that really mattered, he said.)

It's a far cry from general elections going at least as far back as David Dinkins' first election in 1989, when most mayor's races were separated by a few points and none was more than 20 points apart.

The lack of competition is coupled with perennially low voter turnout. Of the 5.6 million registered voters in the city, just over 1 million -- about 20% -- went to the polls this fall, similar to 2017 and 2013.

Columns in the Daily News and Bloomberg have recently advocated in favor of scrapping the current system for a nonpartisan model. "It’s also rotten that registered Democrats effectively determine who holds power here so that most New Yorkers have no real vote, and those who do aren’t representative of the larger city," wrote Harry Siegel in the News.

Andrew Yang, once a front-runner for the Democratic nomination for mayor in this year’s election, has since renounced his former party and launched a new one, the Forward Party, which includes nonpartisan primaries as one of its central goals. While some saw the move as an attempt to sell his new book, his sentiments echoed those of some of his critics like Siegel and Adams. A spokesperson for Mayor-elect Adams did not provide comment for this article when asked repeatedly about Adams’ change of position on the issue.

In big cities across the United States, partisan municipal elections like New York's are more the exception than the rule. Seven of the ten largest U.S. cities have some form of nonpartisan elections including Los Angeles, Chicago, Phoenix, and San Antonio, based on a list compiled by National League of Cities. "This not some kind of new-fangled experiment. This is just the norm at the city-level," said John Opdycke, president of Open Primaries, a national organization advocating for nonpartisan primaries. These heavily Democratic cities often wind up with two Democrats competing in the general election, as was just seen in the Boston race that ran somewhat parallel to New York’s this year.

"If you had a nonpartisan system...every election in the city would be competitive -- the general election, instantly, overnight," Opdyck said. "Here we are spending millions of dollars of taxpayer money funding candidates that are running either unopposed or against a phantom opponent."

According to Ballotpedia.org, 21 states have some form of open primary system for state and congressional races.

The last time New York City formally reckoned with the question was in the 2003 referendum, placed on the ballot by a commission appointed by Mayor Michael Bloomberg and heavily promoted by him. If it hadn't lost with only a third of voters' support, the amendment would have created a so-called top-two system, in which the two highest vote-getters of an open primary would advance to the general election.

Bloomberg also wrote a statement of support in the Campaign Finance Board voter guide, as did former Mayor Rudy Giuliani, and J. Phillip Thompson, currently de Blasio's deputy mayor in charge of democracy initiatives, who worked in the Dinkins administration and was a political scientist at MIT at the time.

The referendum, held in an off-year election, was the most heatedly debated issue of the election cycle with strong opposition from the Democratic establishment and labor unions. Opponents suggested that removing the party infrastructure from primaries would advantage well-funded candidates and harm voters of color. Many felt it amounted to a power grab by Bloomberg, a Democrat-turned-Republican who poured millions of his own money into the campaign (he later became an independent, then a Democrat once again).

"In contrast to the opposition propaganda, a non-partisan election process is not an attempt to disenfranchise minorities or any particular party," wrote Adams, set now to become the city’s second Black mayor, in the 2003 voter guide. Unaffiliated voters "cross all demographics," he wrote and lamented the fact that they cannot sign ballot petitions or vote in primaries. "Please do not believe that this population of “non-party affiliates” are a group of fringe New Yorkers. They are your friends and neighbors," he said.

This year was the first mayoral primary to use ranked-choice voting, a system voters approved in 2019 for party primaries and special elections for city government positions. Adams won the 13-way Democratic race, ultimately defeating former Sanitation Commissioner Kathryn Garcia by just 7,000 votes, with strong support from labor and a parade of political establishment figures.

Amid renewed buzz about nonpartisan elections just ahead of Election Day this year, when the result seemed pre-determined and there was limited apparent public interest in the mayoral race, Mayor de Blasio was asked about the idea at a news conference. He said he was opposed to opening up party primaries and shifting to the top-two system.

"I think the current system is a good system, and no, I do not think we should change it," he said. "I believe the problem with the nonpartisan model around the country is it's very susceptible to the impact of big money." De Blasio added that the city's closed primary system and generous campaign finance program was "much more friendly to the voices of working people and everyday New Yorkers."

Citizens Union, the government reform group, opposed the referendum in 2003 but for the last 11 years has supported a shift to nonpartisan elections and has been asking municipal candidates their position on the matter in its questionnaires for the last decade.

"We've been asking candidates for office ever since about their position on open elections, and you would be surprised at how many of them support it - including candidates who received party support," said Ben Weinberg, Citizens Union's policy director.

This year, of the seven mayoral candidates the organization interviewed in the Democratic Primary, only City Comptroller Scott Stringer and Art Chang, a former banker and Campaign Finance Board member, supported moving to open primaries. Sliwa, the Republican nominee, also said he supported it. Of the other candidates who returned questionnaires, Adams and Garcia were opposed, as were civil rights lawyer Maya Wiley, former federal housing secretary Shaun Donovan, and investment banker Ray McGuire.