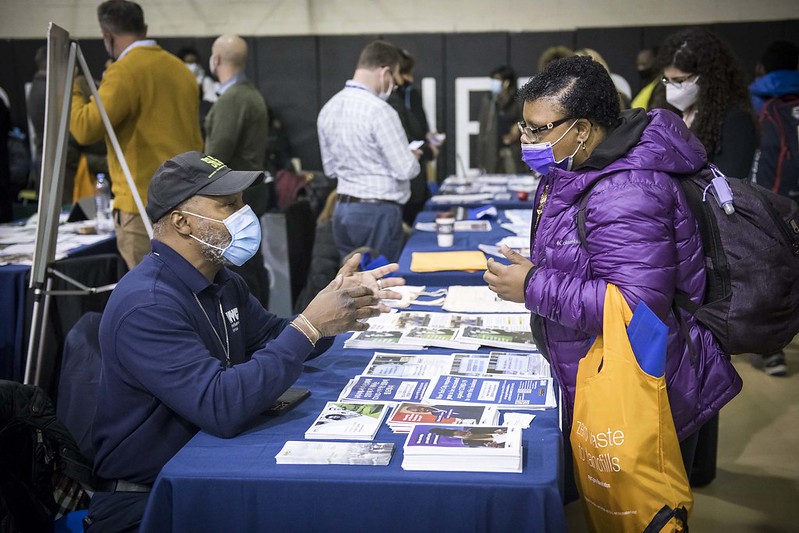 As New York City government changes land use rules and invests in communities through rezonings, it should make workforce development a key piece of the equation, according to a new report recently released by the Center for an Urban Future and JobsFirstNYC, two non-profit organizations focused on equitable growth in the city. This is especially true, the report says, given the economic impacts of the pandemic, whereby the city is still down roughly 500,000 jobs.

“Rezonings, which by definition are places of concentrated public investment, are logical places where workforce investments at the forefront of the field can and should take place,” said Ben Margolis, executive director of Southwest Brooklyn Industrial Development Corporation, in the report.

The 26-page document, “Making Rezoning Work,” advocates for increased workforce investments in lower-income communities, particularly neighborhoods facing on-going or imminent rezoning efforts, which are typically focused on spurring housing growth, including affordable housing, but also often include a variety of other investments from schools to parks to transit and more.

“As New York City grapples with a protracted economic crisis brought on by COVID-19, city leaders will be searching for opportunities to help spark a lasting economic rebound and regain many of the nearly 500,000 jobs lost since March 2020,” reads the report’s introduction. “One option is to use zoning tools to encourage economic development, attracting private investment at a time when public funding is extremely limited and helping to revive the city’s battered economy.”

Since Mayor Bill de Blasio took office in 2014, the city has passed large residential rezoning projects in East New York, Downtown Far Rockaway, East Harlem, Inwood, Jerome Avenue in the Bronx, and Bay Street on Staten Island. The changes to the zoning rules in these areas typically allow for more and larger residential development, and trigger the city’s Mandatory Inclusionary Housing (MIH), which mandates around 25% of newly-developed units to be rent-regulated according to an affordability formula. Each rezoning, ultimately passed by the City Council after a lengthy approval process, is typically the product of a deal reached between the mayoral administration and local City Council member that includes a package of community benefits.

De Blasio has been criticized for only rezoning low-income communities of color and not investing enough in them, including related to local jobs, though that pattern is on the verge of changing as rezonings of Gowanus and Soho -- two whiter, wealthier areas -- appear near approval in the mayor’s final weeks in office.

In 2016, the Mayor’s Office launched a website of commitment trackers that allowed the public to keep track of rezoning efforts, promises, and follow-through.

The new report from Center for an Urban Future and JobsFirstNYC lists seven major steps that the city’s next mayor, Eric Adams, and the new City Council set to take office in January can take to implement beneficial workforce investments in rezoned communities.

Directed at the Mayor, the report recommends creating a neighborhood-based workforce strategy to strengthen local hiring and training networks, and to coordinate investments. “[T]he next mayor should convene every agency with a role in both neighborhood planning and workforce development,” the report says, to form this comprehensive strategy.

The report also recommends the Mayor’s Office helps develop local “workforce networks” including a paid position to liaise among businesses, training providers, community-based organizations, jobseekers, private developers, and city agencies in all neighborhoods, whether or not they are facing imminent rezoning.

Turning to both the city and state governments, the report recommends developers contribute $2 for every square foot of new development constructed into a new “Local Workforce Development Fund'' and passing legislation at the state level to ensure employment of workers from inside the community being rezoned.

According to the report, Mayor-Elect Eric Adams, a Democrat who is currently Brooklyn Borough President, and the incoming City Council should also work with community stakeholders to develop a “toolkit” for designing, planning, and implementing strategic workforce investments that are tailored to each specific community facing rezoning. During his successful campaign, Adams has talked about both enhancing the city's workforce development ecosystem and about rezoning wealthier, whiter neighborhoods in order to create more affordable housing in them and offer more opportunities for lower-income people of color in those areas.

And the report advocates for expanding the number of skilled apprentices educated by the ApprenticeNYC program from 450 to 5,000 by 2025.

While workforce development is included in the city’s rezoning commitments, the report argues that not enough is being done to implement job training, career services, and adult education in neighborhoods facing high rates of poverty, which were disproportionately affected by the pandemic.

“When the city proposes a neighborhood rezoning, it develops a series of commitments tied to land-use changes,” the report says. “These commitments revolve around housing protections but also include investments in infrastructure, schools, parks, and small business services. But our research finds that substantial investments in workforce development have been all but nonexistent in approved rezonings.”

The report points out that the city budgeted $462,250 for job training initiatives in two of the rezoned neighborhoods, though only $312,500 had been spent on new job training programs as of June 2021.

According to the report, even when workforce investments are carried out as part of rezoning a neighborhood, they often fall short of bringing economic change for members of the community.

“In East New York, the first neighborhood rezoned under the current administration, the city committed to a new Workforce1 Career Center—a hub for jobseekers operated by the Department of Small Business Services— but did not make any specific investments in job training or skills building,” said the report. “In fact, of the six neighborhood rezonings approved under the de Blasio administration so far, three have not included any investments in worker training: East New York, Far Rockaway, and Bay Street.”

The report argues that rezoning must be done with the community in mind and that rezoning is an often overlooked tool of bringing economic opportunity, higher employment rates, and less poverty to neighborhoods. This, in turn, has left many New Yorkers unsatisfied with current rezoning methods.

“When it came to the final negotiation, it was really all about the housing,” said Michelle Neugebauer of Cypress Hills Local Development Corporations about her experience  with rezoning the efforts of East New York, in the report. “The other things the community wanted and needed, the second priority being living-wage jobs and economic development, really took a backseat.”