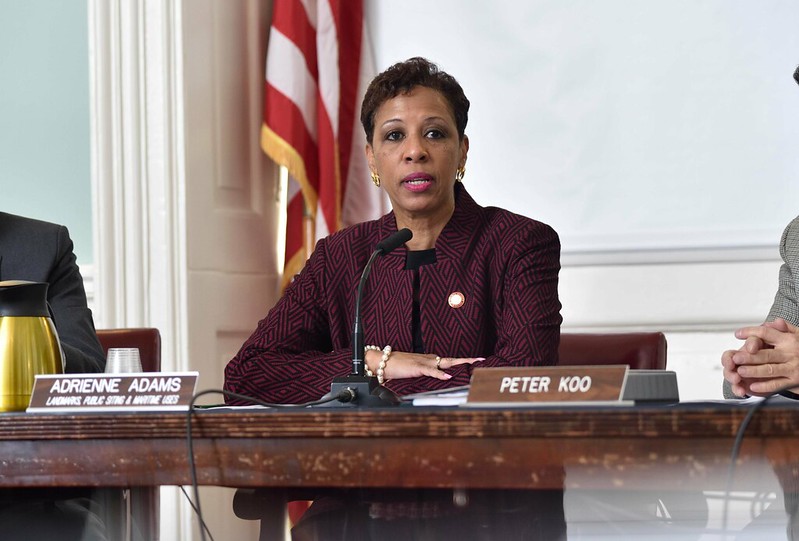 Speaking at length on a recent episode of the Max Politics podcast from Gotham Gazette, Adams outlined key takeaways from a series of oversight hearings she has chaired and her other thoughts on problems at the NYPD that need to be addressed under the next administration, which takes office January 1.

"There has to be a substantial change made in the culture of the NYPD,” Council Member Adams said on the podcast, “and that is a culture that has so many strong roots, decades and decades of a lot of strength, a lot of impression, in the department."

“It is my hope that incoming officers coming into the ranks will have a new perspective, and again, it's going to have to start with the top-down,” said Adrienne Adams, who endorsed Eric Adams (no relation) in the Democratic primary for mayor and is vying to become the next Speaker of the City Council herself. “That's why I say the new [police] commissioner really has her work cut out for her,” she added, referring to Eric Adams’ pledge to appoint the first woman in the city’s history to the top-cop role.

Adams, who represents Council District 28 in Southeast Queens, told host Ben Max about failures she’s seen through her oversight work at the NYPD’s Special Victims Division and elsewhere in the department. She also spoke about challenges related to school security (and her belief that school safety agents should remain part of the NYPD, not the Department of Education as has been planned), sexual assault perpetrated on guards at the Rikers Island jails, and other issues.

She discussed expectations for Mayor-Elect Adams and their long-time relationship going back to their high school years, as well as her bid to become the city’s first Black Speaker of the City Council and support she says she has from U.S. Rep. Gregory Meeks, who is the Queens County Democratic Party leader.

Adams said some responsibilities of the NYPD should be redistributed by investing in more mental health and social services, and that public safety should be a more expansive topic than is usually considered in city politics, including advocacy and services for children. She cautioned, though, that substantial change to the role of police in society will take time and a “hybrid model” will be needed at least for the near future.

“Until we get the number of providers that we need, the strength in providers that we need to be this backbone and create this infrastructure that we need to handle said social services and mental health services and advocacy, once we develop that infrastructure...I think we can move that hybrid along to something that will be much more stable and permanent,” Adams said of shifting some responsibilities away from officers with guns.

Discussing a recent oversight hearing she chaired on the NYPD’s Special Victims Division that focus on its mishandling of rape case, Adams expressed frustration about how the division has been run for a long time.

“It has been very enlightening to uncover through our oversight committees just how many holes there are in the system,” she said. She described how cases of rape and sexual assault were not adressed adequately by the SVD and victims were often ignored, mistreated, and disrespected by officers. She expressed some cautious optimism about the new leadership of the division, but said she will be holding their feet to the fire in the future based on assurances that were made at the hearing.

Discussing School Safety Agents, Adams stressed that they are unarmed and mostly women of color, and said that right now she does not believe they should be transferred from the NYPD, but said she understands concerns about over-policing of students of color and the need for better training.

“The DOE right now is handling children now coming in from the pandemic, full-time, no remote learning,” said Adams. “It's tremendous, but we are going to give the DOE the responsibility or management of hundreds of school safety agents? I don't necessarily agree with it. I know the mayor [Bill de Blasio] talks about phasing in, but I'm not all the way there yet. I'm not all the way convinced that, number one, this is what the SSAs want, and I'm not convinced that this is what is best for the students in the schools.”

Incoming Mayor Eric Adams has also said he wants the SSAs to say in the NYPD and it is a decision that he will ultimately make.

Council Member Adams also spoke about her high expectations for Mayor-Elect Adams, whom she has known since high school in Queens.

In the podcast’s final few minutes, Adams discussed her hopes to be voted by her colleagues as the first Black Speaker of the City Council. That vote will take place among the new City Council class of 51 members come January, though jockeying is ongoing and one candidate for speaker could foster a winning coalition at any time.

Despite being close friends with Eric Adams and having endorsed him in the mayoral primary, Council Member Adams made it a point to say that she is looking to be named speaker based only on her work in the City Council, that she differs with the mayor-elect on some issues, and that the Council is a separate branch of government.

“I am hoping that however the chips may fall, that for my merit and for my leadership capabilities, the things that I've done in the past, what I've done for my district - more than any other of my predecessors - and what I've brought in leadership to the New York City Council over the past four years, Ben, that is what I'm standing on to become the next Speaker of the New York City Council,” said Adams.

And she noted that in this competition for speaker she has Meeks’ support, which could prove pivotal depending on what constellation of agreements can be reached among powerful entities. “I have the full support of my county leader. He's one of my mentors, so I have for a very long time,” said Adams, explaining that the two were on good terms despite throwing their weight behind different mayoral candidates in the primary when Meeks backed Ray McGuire. “No matter who the primary candidate was in the past, the past is past and now we're looking on to elect Eric Adams as the next mayor of New York City.”