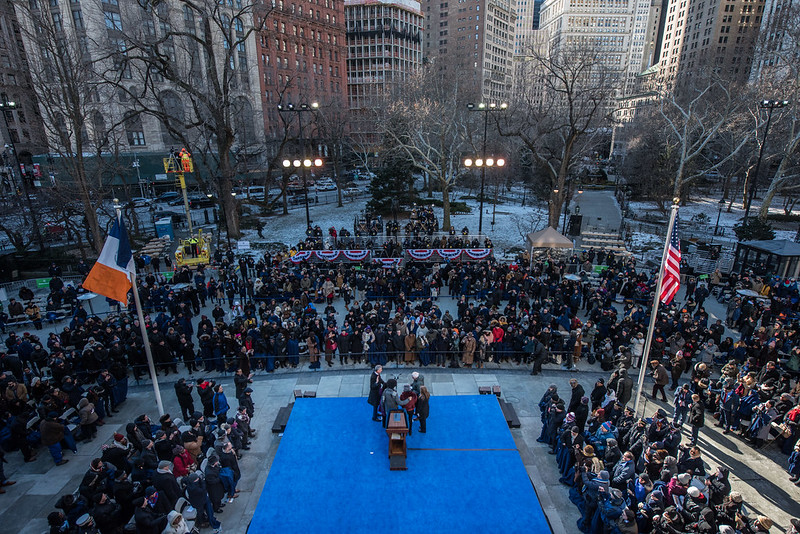 Mayor-elect Eric Adams has raised more than $1 million for his transition and inauguration as he prepares to take over City Hall in three weeks from outgoing Mayor Bill de Blasio.

Adams, a Democrat who will be sworn into office on January 1, pulled in about $984,000 between November 3 and November 30, and has already disbursed about $183,000, according to the initial filing that was due to the New York City Campaign Finance Board this week.

That left him with more than $800,000 to spend as of the filing, but according to his campaign, he has continued raising more funds and has over $1.2 million on hand.

Unlike his campaign committee, which was limited to maximum individual donations of $2,000 in each the primary and general election periods and could receive public matching funds, the Transition Inauguration Entity, as it is formally called, can raise as much as $5,100 from each donor but there are no public matching funds. The entity will also pay for Adams’ inauguration, which the city does not fund.

“I am overwhelmed by the outpouring of support for our transition and enthusiasm for the new administration,” Adams said in a statement. “These funds allow us to help coordinate the work of hundreds of transition team members from diverse backgrounds and experiences to prepare us to hit the ground running on January 1 and make New York a safer, healthier, more prosperous place for all.”

It’s not just New York City residents who seem eager to support the next mayor. While more than $610,000 came from city residents for the transition as of the filing, people from outside the city donated more than $373,000 to the committee so far.

Throughout his campaign, Adams courted the business community and real estate interests, even as he ran to be a “blue-collar mayor.” And the city’s wealthier residents returned the favor, which has continued into the transition. Among those giving maximum donations to the transition committee are billionaire investor twins Cameron and Tyler Winklevoss, Disney Studios executive Alan Horn, and Ford Foundation president Darren Walker. David and Susan Rockefeller each donated $3,100.

Though the transition committee has spent little so far, and mostly on campaign worker wages and consultants, some payments do stand out. Adams paid $2,740 to Five Star Travel Agency Inc., lining up with his weeklong “spiritual journey” to Ghana where he visited a slave-trading post and celebrated Hanukkah at a religious center in the capital, Accra.

While Adams was away, his campaign announced hundreds of transition committee members, building off an initial announcement weeks ago that included a short list of co-chairs of the transition committee, which is being led by Sheena Wright, president of the United Way of New York City, and includes other civic, labor, and business leaders. Adams’ transition committee has various subcommittees, often with dozens of members to help inform his personnel and policy decisions.

Due to return to the city on Wednesday evening, Adams is expected to soon start naming top appointments to his administration.