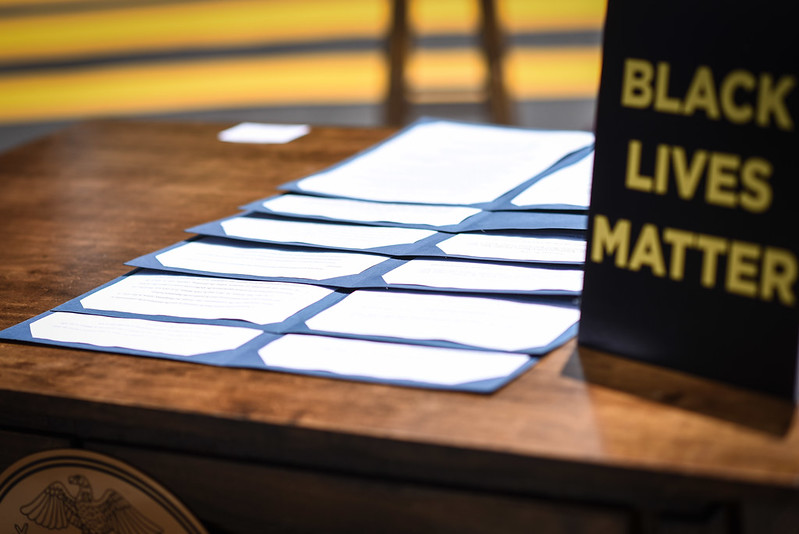 The mayor's commission has decided what to offer voters (photo: Michael Appleton/Mayor's Office)

“I think we've done some very good work here. I believe it's a start, I believe it's a good, strong foundational beginning,” said Jennifer Jones Austin, chair of the 11-member commission, in a phone interview on Thursday. “We knew from the very beginning that we could not, as a commission, a New York City Commission, dismantle on the whole racism that has persisted since the beginning of our society with the killing and displacement of Native Americans. We knew we couldn’t do that. But what we were hopeful for, and committed to doing, was taking the first critical steps to provide a foundation upon which people who will follow us could build, to bring about greater equity for New Yorkers, beginning with racial inequity.”

Mayor de Blasio announced his intention to create a new commission to revise the City Charter in his State of the City address in January. In March, he empanelled the Racial Justice Commission, the first of its kind in the country, for the task and gave it a short runway to produce its proposals and report by December. “Our mission is to root out systemic racism across New York City,” the mayor said when he announced the members of the Commission. “The Racial Justice Commission has the power to put forth permanent, transformative ideas for our government and our city. This moment demands nothing less.” The Commission has since held months of meetings and input sessions for subject matter experts and members of the public before arriving at its final proposals.

At a meeting Thursday evening, the Commission members discussed the final proposals, made certain amendments while rejecting others, and unanimously approved the resolution containing all the proposals. The language for the ballot will be formulated by the commission staff and published in its final report on December 13, just over two weeks before de Blasio is term-limited out of office.

Austin, in the phone interview, addressed some of the concerns raised by commission members that they did not have enough time to adequately discuss issues on the agenda in an effort that no other municipality has undertaken. “Rome was not built overnight,” she said. “We're not going to stand up racial equity overnight. But what we can do is lay the foundation that provides for it, and that holds government accountable to it…Government doesn't turn on a dime overnight. And there's got to be the will, there's got to be the mandate that a charter would provide.”

Of the proposals that the commission will now offer to New York City voters on next year’s ballot, the first would add an “aspirational” preamble with a stated commitment of values to the CIty Charter. It is meant to guide the city government while acknowledging the historical wrongs on which the city is built, namely the displacement of the indigenous Lenape people who originally occupied the land. At the meeting, at Commissioner Phil Thompson’s urging, the proposed preamble was also amended to recognize individuals and institutions that have historically fought for racial justice in the city. Thompson also serves as Deputy Mayor for Strategic Policy Initiatives under de Blasio.

The second proposal is three-fold and aims at holding the city accountable in achieving and promoting racial equity through planning processes, budgets, and enforcement. It would establish a new Racial Equity Office led by a Chief Equity Officer to oversee city agencies’ performance in tackling racial inequity through mandated equity plans. The office would also support a permanent Task Force on Racial Inclusion and Equity to coordinate interagency efforts, set standards for measuring racial disparities, and collect and publish data and indicators on equity.

The proposal would establish the mandated creation of a biennial Citywide Racial Equity Plan so that the city proactively sets equity goals in planning, in determining needs across neighborhoods, and to ensure equitable distributions of resources. The release of the plan would be aligned with the passage of the city budget and capital plan. Finally, the proposal also creates a community-led Racial Equity Commission to allow public oversight of the city government, with mayoral and non-mayoral appointees. The commission would track agency compliance with equity plans, propose outcome indicators for those plans, and receive complaints about agencies failing to follow through.

Commissioner Darrick Hamilton, who is founding director of the Institute on Race and Political Economy at The New School, proposed two amendments to the second proposal, both of which were defeated. He insisted that the Racial Equity Office should be mandated to institute racial equity scoring for legislation, policies, and budgets, and had sought to give the office a mandate to audit city agencies and policies.

“I think if we really are committed to race equity, we should be scoring proposals as well as budgets in a routine, regular way,” he said. “I think that the wherewithal to get it done is part of the task of the executive to begin with.”

Commissioner Lurie Daniel Favors supported the amendment. “If we don't have the check on the budget, if we don't have some sort of scoring mechanism…It just feels to me that we may be in a position where we are creating a set of bodies that will have observation faculties, but no real stick to accompany the carrots…There's no teeth. There's not sufficient enough bite.”

Other commissioners, for instance Thompson, and Rev. Fred Davie, chair of the Civilian Complaint Review Board, agreed with the need for racial equity scores but said it was too complicated to be hastily added to the ballot proposals. “I wouldn't in this case, want the perfect to be the enemy of the good,” Davie said. “I think we should take some time, make a strong recommendation about racial equity scoring, but take some time to make sure that we do it in a way that we can bring both the elected officials as well as the general public along.” The amendment was voted down with six votes against and five votes in favor.

Hamilton’s second amendment was also unsuccessful, with commissioners arguing that giving the new Racial Equity Office an auditing mandate would conflict with existing offices, such as the Comptroller, that already perform that function.

The third proposal that is advancing to the 2022 ballot would mandate that the city create a new metric to accurately gauge the actual cost of living in the city in terms of housing, childcare, food, and more. This additional measure would be much more expansive than the federal poverty measure, which is used to determine eligibility for benefits, and give the city a clearer picture when making policy decisions.

There were several ideas that the commission did not put into ballot proposals but it will include in its final report as part of a Racial Justice Roadmap for the city. The roadmap includes the overarching frameworks of reconciliation and reparations along with a series of more specific policy recommendations for the city to continue the conversation on racial inequity.

Austin acknowledged that the commission set out to explore the question of reconciliation but lacked the necessary time to do so in an adequate and responsible way. “[A] meaningful reconciliation process is a lengthy one, in which considerable time must be invested to create a foundation of trust upon which to build so that it can move forward with a sensitivity, seriousness, and respect that it deserves,” she said.

She also pointed to efforts around reparations in other municipalities and at the federal level, where Democrats have advanced a bill in the House of Representatives that would study the issue. “No doubt, this is a large and costly endeavor as it should be. But again, one the commission largely believes is worth meaningful exploration by lawmakers and policy-makers,” Austin said. In its Racial Justice Roadmap, the commission made a formal recommendation that the federal government continue that effort and establish a national reparations program, and that the city should use a similar framework in policy decisions about resources.

Other recommendations in the roadmap include strengthening existing oversight agencies in the city, creating an independent Racial Justice Watchdog, creating tools to measure racial equity, reforming the criminal legal system, expanding voting, and using a justice-focused framework for land use and planning decisions. The roadmap was also amended to include recommendations on housing for formerly justice-involved people, collection of data on assets and debt, unemployment, and identifying food, clothing, and shelter as human rights.

The work of the Racial Justice Commission isn’t concluded. As Austin noted, they will now have to conduct an extensive education and engagement campaign to inform New Yorkers about the proposals. “Many people aren't aware that there is a Racial Justice Commission,” she said. “There are many people who…need to be informed to best appreciate what equity means in terms of their everyday lives and experiences.”

Austin expects opposition to the commission’s work. “I am a Black woman of 53 years of age, living in America. To not anticipate any blowback on this would suggest that I've been like living under a rock all of my life,” she said.

In fact, Austin said she’s already witnessed the ire of at least one New Yorker. When the commission was first empaneled, she said she received a not-anonymous letter from an individual who denied the existence of structural racism in the city. “We're gonna get some pushback. But the work that we must do, we must be ever-vigilant, as we've been these past nine months, in helping people to see what structural racism really is, how it's played out, and how advancing equity for everybody is actually a win-win for the city of New York.”