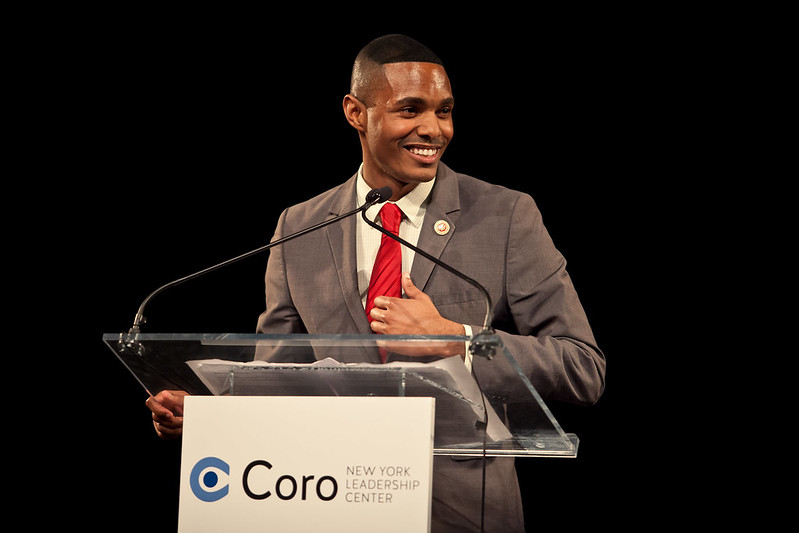 When the next session of the City Council begins in January, multiple seats will be filled by alumni from the Coro New York Leadership Center, a local organization playing a key role bringing new leaders into city government.

The work of the nearly 80-year-old nonprofit leadership institute is also evident given Coro’s representation on Mayor-elect Eric Adams’ transition committee. Coro’s mission consists of training emerging NYC leaders so that “All individuals, communities, and institutions participate in creating an equitable, just, and engaged society” and its new executive director is working to find promising new leaders from historically overlooked communities.

According to Coro’s Executive Director, Adem Bunkeddeko, the prevalence of Coro alums stems from the overlap of the organization’s mission to provide hands-on, inclusive professional leadership training with values New Yorkers are now increasingly looking for in city leaders such as passions for social change, equity, and community building.

“We're seeing a sort-of blossoming in many ways this particular year because I think a lot of the issues, a lot of the challenges are central to the toolkit, the training, the facilitation, and practice that Coro engages with every day in our programming,” said Bunkeddeko, a former senior advisor to the Local Initiatives Support Corporation’s Project 10x, an initiative addressing racial opportunity gaps. “I think that's now even more relevant today than ever…it's exciting and I think it's going to continue to be the case for many years to come.”

Started in San Francisco in 1942 at a time when “leaders feared that democracy as a form of government was under threat by the rise of communism and fascism,” according to the Coro website, the nonpartisan nonprofit was established to train young military veterans for additional public service and provide higher education leadership training. In the decades that followed, Coro grew and created programs in New York City, Los Angeles, St. Louis, and Pittsburgh.

Coro’s Fellows Program in Public Affairs is the “cornerstone” of the organization, according to Bunkeddeko. The fellowship offers a full-time, eight-to-nine month program that includes leadership development seminars, five rotational work placements, interviews and seminars with current civic leaders, and weeks where fellows can investigate any topic of their choosing. Every year out of the hundred of applicants, twelve fellows are selected and are eligible for stipends based on financial need to complete the program. Coro also offers five other programs spanning from the Immigrant Civic Leadership Fellowship to the Participatory Budgeting Youth Fellowship.

Since becoming Coro New York’s Executive Director earlier this year, Bunkeddeko said he has tried to increase the organization’s scale and funding, as well as find emerging leaders who do not come from “the traditional pipelines.”

“We just think that there is a real opportunity, particularly now, to shape not only New York in a profoundly positive way, but society on the whole as we are trying to grapple with questions around what will our city and state look like after we recover from the pandemic,” said Bunkeddeko. “We believe that this emerging set of leaders are going to be instrumental in helping shape that.”

For Bunkeddeko, the mission to support and include a diverse range of aspiring leaders is a personal one.

“I come from, at least, the group that I'm seeking to elevate,” said Bunkeddeko, who ran twice for Brooklyn’s 9th Congressional District seat in 2018 and 2020. “My parents are war refugees from Uganda. My parents had very little, we managed to eek by, but it is by virtue of opportunities and they're hard work and the hard work of not only myself, but the belief of others helped me to sort of get to a place in life where I can be able to be in this situation where I can help others again realize their full potential.”

As Eric Adams prepares to assume the role of mayor on January 1, his current transition team includes over three dozen Coro alumni.

For example, Gregg Bishop, former Commissioner of the New York City Department of Small Business Services, was a participant of Coro’s Leadership New York program in 2009-10, briefly ran Coro New York on an interim basis before it hired Bunkedekko, and is now a member of Adams’ economic & workforce development transition committee. Nanette Smith, an alum from Coro’s Leadership New York 1995-96 program, is one of the leads on Adams’ appointments committee. Candis Tolliver, the Political Director of the local Local 32BJ branch of the Service Employees International Union, is a lead of Adams’ ‌public safety & justice transition committee and completed Coro’s 2017-18 Leadership New York program.

As 2021 marks a significant moment for the organization’s leadership training and New York City government, going forward Bunkeddeko hopes Coro will continue to discover new leaders from underrecognized communities and expand its success from City Hall to Albany.

“I think if we can make public service and just participating in public life attractive to a new generation of New Yorkers and leaders who often have been excluded,” he said, “that is going to have a phenomenal impact in the city and in New York and in society just generally.”