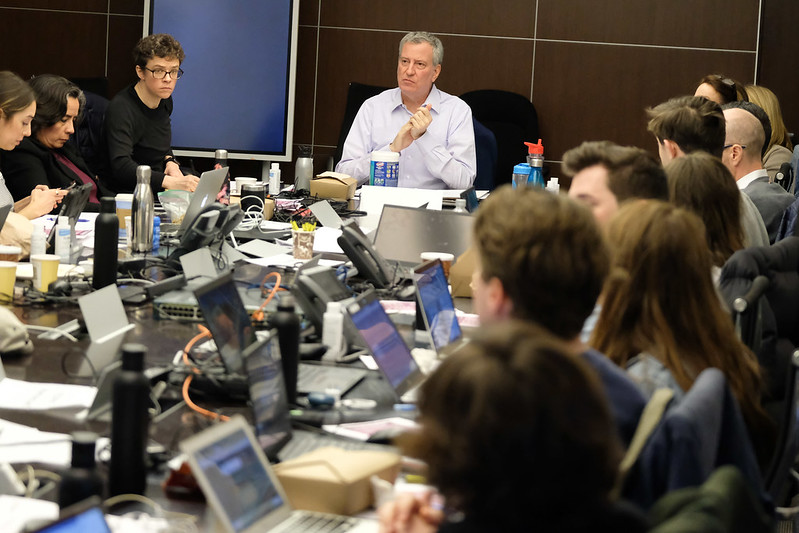 With Bill de Blasio’s tenure coming to an end, one of his top aides is reflecting on the administration’s legacy, defining achievements of its eight years in power, and what she thinks people got wrong about his leadership.

Emma Wolfe, who has worked as de Blasio’s chief of staff for over a decade, dating to his time as Public Advocate, recently joined the “What’s The [Data] Point?” podcast from Gotham Gazette and Citizen Budget Commission to reflect on her eight years as a top aide to the city’s top dog, mistakes she and the mayor made, dealing with the state’s Executive Chamber under former Governor Andrew Cuomo, the incoming administration of Eric Adams, and more.

Over the years, Wolfe has largely operated behind the scenes, and she has a strong reputation among people inside and outside government, even those who are not fans of her boss. She is known as de Blasio’s top governmental and political advisor, fixer, and other titles — she’s someone the outgoing mayor has leaned on to help him get elected, to get legislation passed, and to figure out all sorts of thorny problems.

In the final weeks of the Democratic mayor’s tenure, Wolfe says that eight years ago she didn’t fully understand the importance of maintaining positive working and personal relationships in the grand scheme of governing a huge, chaotic place like New York City and amid the inevitable crises that a mayoral administration faces.

“There were some moments in this place where it really felt it was easy for you to feel sort-of alone or alienated,” Wolfe told the podcast hosts, Gotham Gazette’s Ben Max and CBC’s Carol Kellermann. “In all of these moments you realize when you're running around and you're in kind of a rough and tumble place that is city politics, I learned that, sometimes I didn't do well, but you really do begin to find a value in maintaining relationships because they matter for how you approach people humanly, in addition to it being important for governing.”

Wolfe, who has a long resume working in organizing and in politics, has been as crucial a figure in the de Blasio administration as anyone beyond the mayor himself. When the administration began in 2014, she was put in charge of shepherding the mayor’s signature universal pre-K initiative through state approval and funding, an endeavor which was ultimately successful but which she described as “an immense legislative and intergovernmental and communications and press endeavor” and “very, very difficult” work.

She also thinks that, at the end of the day, major statewide policy achievements like raising the minimum wage and paid family leave wouldn’t have occurred had de Blasio not made them priorities.

And Wolfe said that the administration’s work during the COVID-19 pandemic has been, ultimately, something to be proud of.

“People went from having one difficult job to two or three difficult jobs, that had to suddenly turn on a dime and think of government in a completely different way,” Wolfe said of being in the “situation room” making difficult decisions each day on how to create the city’s testing capacity from scratch, ensure everyone had enough food, and other emergency initiatives. “And all of the rigid bureaucracy that we had to encounter withered away, and people stepped up and did things you never would have imagined.”

While Wolfe indicated pride about the last eight years and defended the de Blasio record, as would be expected, she does have regrets. She thinks that the administration often didn’t recognize the importance of having a robust policy and communications strategy in concert, instead siloing those efforts in such a way that hurt their cause.

“Sometimes I would be set on a sort of political or legislative mission, press be damned. Sometimes we would put everything else aside and say we're gonna take our lumps here on press and communications. And you shouldn't do that,” Wolfe said. “You should figure out how to have a successful strategy with both. Because it actually really, really matters for your own capital and how you stand with New Yorkers. And it's not about popularity, you need that in order to effectively govern; and we sometimes pooh-poohed it, and we weren't helping ourselves.”

"It did feel at times that we kind of succumbed to the negativity of whatever the situation was," Wolfe acknowledged of de Blasio’s City Hall.

Wolfe thinks Adams has a kind of natural media “savvy” that de Blasio didn’t, with strong instincts on messaging and relationships. She cited the mayor-elect’s feeding an exclusive story on the selection of his police commissioner to The New York Post, an outlet which de Blasio had a mutually-antagonistic relationship with during his tenure.

"I think the mayor-elect has been really savvy with the press and communications to date,” Wolfe said of Adams. “I think it's very clear what his message has been. I think he's gone around the city with a lot of joy and a sort of retail-politic kind of approach. And I'm not a communications professional, but it feels to me like there is a real excitement from [the media]. And they have a very creative media strategy."

"We should have had a strategy that recognized that reality more,” Wolfe said of better communications and media relations. “And I feel like we didn't and that's on all of us. And the mayor has reflected on that too."

She also acknowledged some areas of policy failures by the administration, including and beyond the handling of the homelessness crisis that de Blasio has oft-cited as his biggest policy challenge. Wolfe cited a failure to recognize the scope of problems at NYCHA public housing, and focusing too much on how the MTA was the state’s responsibility rather than articulating a vision for how it could be improved.

Wolfe was relatively tightlipped when asked about dealings with former Governor Andrew Cuomo’s administration, whose governing tactics of bullying and retaliation are now well-known. Wolfe, who was often the top city liaison with the governor’s office on high-profile or -priority matters, did say that the way Cuomo treated de Blasio and the city often meant that people in city government often had to put excessive amounts of work into projects for limited return, like working for four months to get mayoral control of schools extended for one year. And she said that the governor’s office had a “very effective operation” to create negative narratives about the de Blasio administration.

On the general dynamic between state and city governments Wolfe said that if the state is to have control over large institutions crucial to the city’s operation, like the MTA and CUNY, that the state shouldn’t attempt to pass the buck as it did so many times during the Cuomo administration.

"The dynamics in terms of how we worked together, even in the best of times, were always incredibly challenging,” Wolfe said.

“Where there are things that are impacting so many New Yorkers' lives, either fund it and help us manage it, or hand it over to the city,” Wolfe said. “If state government is going to have a whole lot of control over such large institutions in New York City, then they need to change how they're approaching those two things.”

In the end, Wolfe summarized the reality and narrative of former Governor Cuomo, saying, "Some of the management that was deemed so effective and robust and aggressive was in fact at times both micromanagement but also not particularly competent. And it was never spun like that during it."

For his part, de Blasio remained, as most mayors are, a polarizing figure throughout his two terms in office, often praised for lofty progressive policy objectives and some accomplishments, but criticized for execution on a variety of fronts, and especially for the way he managed (or didn’t manage) city agencies. Wolfe, however, thinks de Blasio should get more credit for how he performed as the city’s top executive.

“When people say he gets in his own way or his personality or what have you, I don't think there is much recognition of how he, as a manager, as the executive, does get the best out of a whole lot of people in government,” Wolfe said. “The degree to which he pushes and prods and gets people to be creative and rejects bureaucratic impulses, I just don't think that that's widely recognized.”

Asked about de Blasio’s brief and ill-fated run for president in 2019, Wolfe declined to share her private conversations with the mayor, but argued that it did not hurt the day-to-day function of city government, though it may have hurt the mayor’s political capital.

As for the transition to the Adams administration, Wolfe said there is a lot of work ongoing, but it is also a challenging time for many people working in City Hall who know they need to find new jobs. While she said she didn’t have too much specific public advice for Mayor-elect Adams on setting up his government, she did have a few words of wisdom from her experience.

"For the incoming administration, public safety is a huge, huge, huge issue,” she noted, “so we all assume we're gonna see a slightly different government structure that attends to that."

The mayor has hinted heavily that he intends to throw his hat in the ring in next year’s gubernatorial race. Wolfe, however, said she will be leaving politics, at least for a bit. She said she does know what she’s doing next professionally, but “I will tell you in January."

[LISTEN to the full conversation with Emma Wolfe, on What's The [Data] Point?]