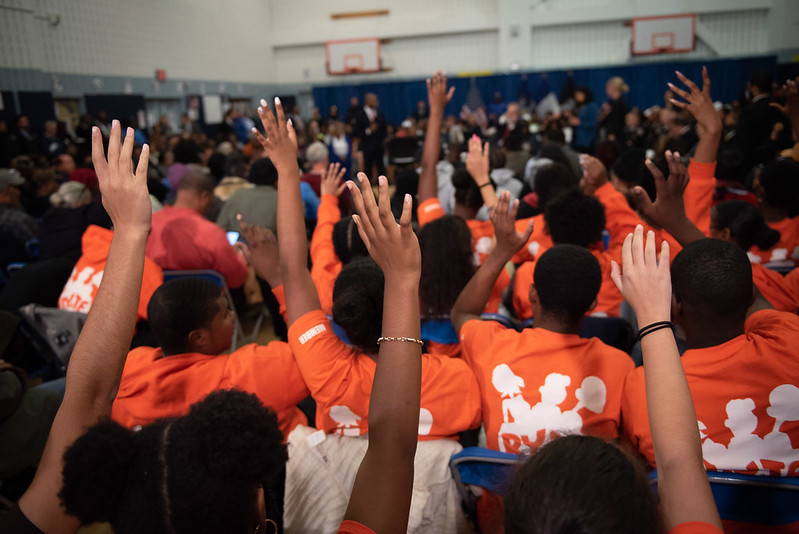 Over 45,000 New Yorkers have participated in a public policy survey aimed at informing the nascent administration of Mayor Eric Adams, a Democrat who took office on January 1. The results could bolster the mandate for many of Adams’ campaign promises and priorities and bring new ideas to City Hall.

The survey, which is open to any New Yorker and anonymous, is scheduled to close on Friday, February 11. It’s part of NYC Speaks, a privately-funded project meant to engage the public in informing the new administration's approach to critical issues facing the city. The survey's designers sought to capture a diverse set of New York voices on more than two dozen multiple-choice questions in ten topic areas ranging from public safety to housing to education, and others.

Participants are also asked a number of optional demographic questions and have the ability to provide open ended comments at the end of each subject category.

It was launched late last year as part of Adams’ mayoral transition and is being managed by HR&A Advisors, an economic development consulting firm, in coordination with Sheena Wright, the deputy mayor for strategic initiatives and former head of Adams' transition team.

"We are so proud to be a part of an initiative that centers the voices of diverse New Yorkers through community generated data and this survey is only the first phase," Wright said in a statement to Gotham Gazette. "We look forward to continuing this work through community conversations, the second phase of the project, in partnership with community-based organizations, City staff, elected officials, philanthropy, and more."

"All the data collected will help inform the policies and priorities of the Eric Adams administration and will lay the groundwork for annual, community-led qualitative data gathering,” Wright said.

Once the survey closes, its results will be analyzed and discussed at local community events in February and March and later presented to the Adams administration, City Council, and five borough presidents, said Dr. Shango Blake, co-executive director of NYC Speaks, in an interview with Gotham Gazette.

"I'm very proud of the work that we have done collectively," he said. "I think that we're going to have some real actionable data that city government can look at."

The questions ask participants to prioritize things like what public infrastructure they'd like to see in their neighborhoods; how the city should support frontline workers; how the Adams administration should balance local concerns with the need for city-wide development; and what kinds of health and social services New Yorkers most want in their neighborhoods.

On January 31, NYC Speaks in partnership with the city's Department of Education launched a youth survey with the hope of reaching 5,000 high school students by the February 11 close.

Blake said the program's leaders made efforts to reach low-income New Yorkers and people of color, including using canvassers, community and ethnic media, and tapping into the same network of community-based organizations the city relied on to boost Census responses in 2020. NYC Speaks has been targeting the 33 neighborhoods identified by the city's Taskforce on Racial Inclusion and Equity as hardest hit by the pandemic.

Blake estimated roughly a third of the respondents were Black, despite making up only a quarter of the population. Asian New Yorkers had also participated at disproportionately high levels, Blake said.

"Everything in the process and approach was to be inclusive of the diversity of New York so we can get our thumb on what New Yorkers are suggesting as solutions," he told Gotham Gazette.

The questions themselves mirror Adams' agenda and in many cases ask respondents to select from a menu option of policies that the new mayor has already indicated are in the works.

For some topics, like employment and economic mobility, the questions read like a best-of list of Adams' stated plan for workforce development, small business recovery, and support for frontline workers. The same is true for the category on public safety, an issue Adams has staked his mayoralty on, and others. The survey's first question is "How can City government make your neighborhood safer?" The options include, among other things, more affordable housing and tenant protections, improving police-community relationships, improving lighting, increasing the police presence, and sending mental health experts in lieu of cops to New Yorkers in crisis.

The options do not mention creating the plainclothes police unit to target guns in high crime areas, a controversial Adams initiative.

"I can tell you that public safety is one that is generating a lot of buzz," Blake said, noting it was the first category participants see.

Blake said the questions were developed by "civic policy councils" selected based on criteria of geographic and ethnic diversity "and a mix of lived experience with subject matter expertise." Not every draft question made it into the final survey and some that didn't would be raised at later NYC Speaks events, he said.

The ones that did offer a glimpse of what territory Adams' administration is willing to go into, and where it will not go.

The survey asks how the city government can "address school segregation," a term Mayor Bill de Blasio went through pains to avoid, even after he established a taskforce to study the issue. But it doesn't ask about replacing the city's gifted and talented program – something researchers have identified as a key driver of school segregation and which de Blasio embraced in his last months in office, announcing a universal enrichment plan that Adams has said he will not follow through on. Instead, it uses the language, "Reform NYC's Gifted and Talented program to recognize an expanded definition of what it means to be gifted and create opportunities for students to participate," policy Adams has suggested, including when he broke with de Blasio last year.

A question that asks about "the most urgent priorities to rebuild our education system" given the impacts of the pandemic includes an option to "expand charter schools," a stance Adams has not fully embraced as mayor, though he has been a longtime supporter of the privately-run, largely non-unionized public schools and has repeatedly said he is in favor of issuing more charters.

In the section on "Equity & Racial Justice," one question asks if the city should "find a way to provide reparations to New Yorkers" who are "descendants of Africans enslaved in the U.S. [with] some in the form of cash for home repairs and down payments on property."

Some are focused on Adams' campaign promises, like a question that asks what programs New Yorkers would like to see on a digital app that centralizes applications for government services. Others are more like referenda: "How strongly do you agree or disagree that City government should provide a public option for child and elder care to ensure that no NYC family pays more than 10% of their income on care services?"

Asked about question development and alignment with Adams’ agenda, Blake said all were the result of "consensus" in NYC Speaks' civic policy councils. "This is what New Yorkers are talking about currently," he said. "If we're not asking the questions that people are talking about then to me it takes away from the authenticity and the validity of the research."