New Yorkers are in crisis because of COVID-19--and they need immediate, serious financial assistance to get through. Unfortunately, much of the assistance that  New Yorkers qualify for is significantly delayed because it is tied to federal and  local tax credits that are paid out just once a year.

To get New Yorkers the money they need right now, Eric Adams proposes the NYC AID (Advanced Income Deployment) initiative to get struggling individuals and  families their Earned Income Tax Credits (EITC) in advanced monthly payments, while also substantially increasing the amounts of the credits to deliver the high  level of aid needed during our financial crisis.

Under Adams’ plan, a New York City family with two children on the edge of  poverty earning $30,000 a year would receive approximately $3,000 annually, or  about $250 a month from a boosted City EITC program. Currently, that same  family would receive about $250 for the entire year from those same credits.

Credits would be paid out monthly as an advance by the City on qualifying New  Yorkers’ past annual earnings. A safe harbor provision would also be added so  that any increase in earnings over the year of monthly benefits would not affect  pay out. A pilot in Chicago and a federal program that was in place from 1979 to  2010 both showed that this method of advanced payments were feasible,  economical, and ultimately successful in reducing poverty and improving  outcomes for recipients.

How Does It Work?
Adams would provide new substantial, dependable income by changing the  current City tax credit system by: 1) Increasing the City’s EITC match from 5% of  the federal credit to 60% for those New Yorkers and households earning $30,000  a year and less; 2) Increasing the City’s EITC match to 30% for those earning  between $30,000 and $50,000; and 3) paying advance monthly checks to  qualifying recipients based on their earnings from the previous tax year, not in  lump sums at the end of the tax year.

While the AID program would provide the most significant support for  lower-income New Yorkers who are in serious danger, Adams’ plan would also  reach out to catch the large number of middle-income New Yorkers who are now  suddenly on the edge, and could easily fall into poverty. That part of the plan is  essential because the last 12 months of income for so many New Yorkers does not  necessarily reflect their current financial circumstances.

For instance, a couple with one child may have depended on one source of  income that put them in the “middle class” earning $50,000 a year, but now both  adults are unemployed and facing eviction and debt as savings evaporate. That  couple’s income for the last year looks adequate on paper, but it does not reflect  their financial situation. This would allow AID to cover nearly 900,000 New Yorkers.  The total amount advanced per household would reach up to $4,000 over 12  months for lower-income families with children.

Because the boosted EITC match would be based on an existing City program  that is pegged to a federal program, it is also unlikely the increase in assistance  would affect New Yorkers’ access to other government benefits.

How Is It Administered?
The NYC AID plan would also mandate payments be distributed via either direct  deposit or a prepaid debit card so that predatory lenders and check-cashers do  not take advantage of New Yorkers. To make this possible, Adams would also  immediately initiate his local banking network proposal, working with small and  large banks to set up free checking accounts for any New Yorker who needs one,  giving them access to financial tools that can help them manage their money and  build wealth.

And when eligible recipients are signed up for the AID program, they will  immediately be connected with HRA case workers who will use their AID  information to connect them to a much broader range of local, State and federal  benefits to ensure our residents are getting every benefit they qualify for--and  that the City is getting back every dollar it sends to Albany and Washington, D.C.

How Do We Pay For It?
Increasing these credits for struggling New Yorkers would cost approximately $1  billion. New costs for administrative fees would be low. Colorado estimated that  the cost per participant in an advanced income program would be about $4.50.

But the cost of doing nothing is likely higher because so many New Yorkers are at  risk of falling into poverty and so would require public assistance for much longer  without immediate assistance. Studies show that some amount of dependable  advanced income for struggling households -- that can be counted on monthly  to keep finances afloat and afford childcare -- allows recipients more time to  focus on finding a job, starting a new business, or learning skills that can help  them become employed. The aid would also likely be immediately recirculated in  the local economy, since recipients of advanced income tend to spend it on basic  goods and services.

Even so, it would be irresponsible for any new City initiative with a price tag to  come without a payment plan--especially when the City faces large out-year  budget deficits. Adams has already proposed a three-part plan for closing the

projected City budget deficit, including 3-5% cuts across the board to City  agencies, attrition of non-essential City workers, and a modest increase to the  City income tax on ultra-millionaires.

Combined, those actions are projected to save or create $5-6.5 billion in the first  year, increasing year-over year as headcount drops and further agency savings are  found. Even with projected deficits and without depending on expected new  stimulus from Washington, that savings and revenue will cover the gap and  advanced increased credits payments to struggling New Yorkers. 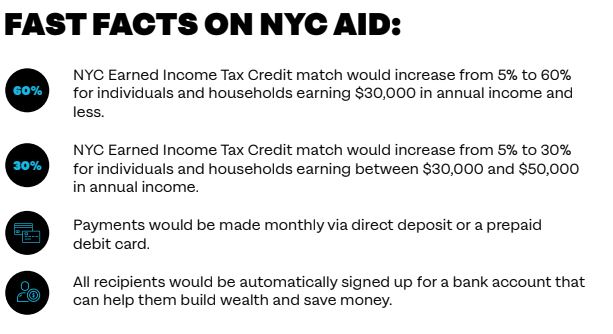