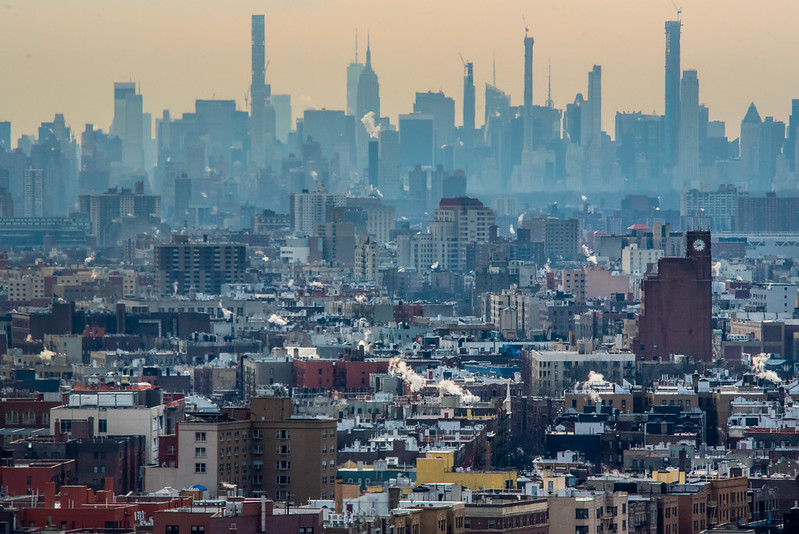 New York’s Climate Mobilization Act of 2019, billed a “Green New Deal” for the city, included a groundbreaking law to cut carbon emissions by the biggest buildings, and the biggest polluters, in the city through caps and mandated energy upgrades and retrofits — or face financial penalties. The first set of emissions caps are set to go into effect in 2024, and the city has the complicated task ahead of setting new rules and regulations by the start of 2023, a formidable task with 10 months to go.

While Mayor Eric Adams’ administration is confident about meeting that schedule, advocates and elected officials have expressed some concern that his recently proposed budget doesn’t allocate sufficient funding or staff behind the effort. Those concerns are on top of prior criticism from some that the new mayor, a Democrat who took office January 1, that he and his administration parrott real estate industry talking points pushing back against the new law.

About 71% of emissions in New York City come from buildings, particularly about 50,000 structures over 25,000 square feet. Local Law 97, which was part of the Climate Mobilization Act, aims to cut emissions from the largest buildings by 40% by 2030 and by 80% by 2050. The law requires that property owners make improvements and upgrades to their energy systems to comply with the new emissions caps.

Those buildings that do not comply with the limits will face financial penalties that could be in the millions per year for the worst polluters.

The law also applies to New York City Housing Authority (NYCHA) public housing developments but does not contain any penalties if those buildings do not comply by the same deadlines. In November 2020, former Mayor Bill de Blasio signed a law that extended Local Law 97 to roughly 1,000 rent-regulated buildings as well. At the same time, the law also requires that the city broadly commit to cutting emissions of city government operations by 40% by 2025 and by 50% by 2030. In December, de Blasio signed an executive order to implement that goal and, according to a press release from his office, the city was set to surpass its target and cut emissions by 70% by 2030.

The first cap will go into effect in 2024, affecting 20% of that largest set of private buildings over 25,000 square feet, followed by a stricter set of caps in 2030 that will affect 75% of the concerned buildings.. The law is expected to create tens of thousands of jobs in construction, design, and renovation. In addition to the law, the city also created a Property Assessed Clean Energy (PACE) program, which helps building owners finance energy retrofits and renewable energy projects, such as green roofs, solar energy systems, upgraded HVAC systems, improvements to sealing and air ventilation.

The PACE program is run by NYC Accelerator, an initiative under the Mayor's Office of Climate and Sustainability, which also provides free guidance and other incentives to property owners to encourage energy efficient retrofits and upgrades.

Local Law 97 also established a new Office of Building Energy and Emissions Performance under the city’s Department of Buildings to oversee implementation. The new office has a host of duties to carry out in the next ten months, including clarifying building categories, calculating complicated emissions formulas before the first caps set in, and establishing emissions limits for 2035-2039 and 2040-2049, and beyond. The Office of Building Energy and Emissions Performance will have to create formal rules for these and other aspects of the law, a process that requires public review and input.

The Office of Building Energy and Emissions Performance currently has six full-time staff, a number that remained unchanged in Adams’ recent preliminary budget proposal for the next fiscal year beginning July 1, raising concerns among advocates that it may not have enough resources to carry out the herculean task ahead of it.

The mayor’s office, however, acknowledged that those staffing and funding needs will likely grow over time to effectively implement the law. The next city budget will be a negotiated deal between Mayor Adams and the City Council after the Council holds many public hearings in the coming months.

The mayor himself has been supportive of the law even though he has raised concerns that it may be too punitive and that the city hasn’t done enough to reduce the cost of upgrades and retrofits.

“The Mayor acknowledges that in order to reach our environmental goals, the City needs to help ensure that retrofits and upgrades are easy and affordable,” said an Adams spokesperson, in a statement to Gotham Gazette. “Fines don’t serve the goal of GHG reductions, but retrofits and upgrades create jobs. That is why he has supported City subsidies to assist property owners in need with the cost of retrofitting and called for significant investment in retrofitting the City’s own buildings as part of a broader strategy to ensure NYC is a national leader in reducing carbon emissions and in creating a green economy.”

The mayor’s assurances are inadequate for some advocates. “It's a big complicated law with a lot of moving parts,” said Pete Sikora, the climate and inequality campaigns director with New York Communities for Change, a nonprofit group that was among the leaders pushing for the Climate Mobilization Act. That’s why Sikora sits on the city’s 16-member Climate Advisory Board, which was also created by Local Law 97 and charged with issuing recommendations to the city about achieving the goals of the law by January 1, 2023.

“There's a certain minimum number of people that are required to do the basic administrative functions that the law requires,” Sikora said. “They're at a point where they need to get to another 10 or 15 staff pretty much immediately or the implementation will get sort of needlessly chaotic.”

Sikora praised the current team at the Office of Building Energy and Emissions Performance but said they clearly need more staff to implement one of the most significant pieces of legislation the city has passed in years. “This is, to put it in perspective, the biggest jobs program that the city has that it doesn't fund,” he said. “One of the things that's so great here is that the law creates tens of thousands of jobs in design, renovation, and construction in upgrading buildings. And so part of that is in danger if the implementation is rocky.”

He also noted that the mayor’s critiques of the law's penalties and costs echo critiques from the powerful Real Estate Board of New York. “They keep using REBNY talking points about the law…[Adams] should listen to the people, not the real estate lobbyists,” he said.

In a statement, REBNY President James Whelan said, “We are committed to working with the public sector to continue reducing carbon emissions throughout the built environment and we support the goals of Local Law 97. We look forward to working with Mayor Adams and his team to effectively achieve our shared emissions reductions goals.”

The only way the penalties, set in the law, could be adjusted would be through new legislation.

City Council Member James Gennaro, a Queens Democrat and the new chair of the Council’s Committee on Environmental Protection, said the mayor’s office reached out to him to discuss the implementation of Local Law 97 and he is confident that the Adams administration is committed to effectively implementing the law.

Gennaro himself shares Adams’ concerns about the law but he doesn’t want to revisit the legislation and neither does the administration. “That is not their posture,” he said, praising Adams’ people for being proactive about any concerns about the law. “They are looking for a partnership with me and with the Council and I think that's exactly the way to go,” he said.

He said there are legitimate concerns about whether buildings will be able to secure adequate financing for renovations through the city’s NYC Accelerator program and whether the burden of compliance will be unequally distributed given property owners’ varied abilities to comply. “The way [Mayor Adams] wants to muscle through this is to figure out a way that is fair and equitable and not overly burdensome,” he said.

Though staffing wasn’t a prominent issue of discussion in the meeting with Aggarwala, Gennaro said, the Council member said he is confident that the Office of Building Energy and Emissions Performance at the Department of Buildings will have enough resources by the time the next city budget is finalized in June. “It did come up but it didn't receive a lot of attention because that's a very fixable thing. To make sure that office is appropriately staffed is not even a rounding error in the budget,” he said.

There is the potential for public discussion on the issue during the weeks of City Council preliminary budget hearings, including when Gennaro co-chairs a hearing on Adams’ initial spending plan on March 25. The preliminary budget hearing for the Council's Committee on Housing and Buildings, which has oversight of the Department of Buildings, will be March 14. Council Speaker Adrienne Adams’ office did not provide comment for this article despite multiple requests.

City Council Member Lincoln Restler, a Brooklyn Democrat with a focus on climate issues, said the enforcement of Local Law 97 is among his top priorities and he echoed Sikora’s worries that the Adams administration isn’t giving it the necessary attention. “It certainly appears that [the Adams administration] need to add capacity to ensure that as many buildings as possible are compliant with Local Law 97,” he said. “Local Law 97 is the single most consequential piece of legislation that has come out of the Council in the last decade, and it has the potential to successfully drive down emissions from our city's largest polluter: big buildings.”

He said the Office of Building Energy and Emissions Performance needs more funding for its many responsibilities that include rulemaking, oversight, public education and information. “We need a robust mixture of carrots and sticks, incentives and penalties to secure compliance with Local Law 97,” he said.

Restler was also troubled by the administration’s repeated complaints about the law’s costs and penalties. “Those remarks sound similar to the critiques that we are hearing from the Masters of the Universe and Big Real Estate,” he said. “This law was thoughtfully drafted and is the most important piece of legislation in advancing our urgent climate goals...We can't afford any slippage, any weakening of the law, any steps backward. This is the existential challenge of our time, and we need the most ambitious and muscular implementation of this landmark law.”