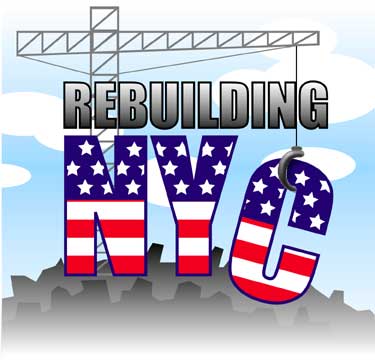 The events of this last week have forced government to focus on the urgent tasks of relief and the search for victims of September 11.

As things begin to get back to normal, however, government faces the new issues and challenges of planning for reconstruction. Mayor Rudolph Giuliani has already asked displaced businesses what the city can do to help them rebuild and relocate in Manhattan. The Mayor and City Council Speaker announced plans to form a special commission responsible for rebuilding in lower Manhattan. The new commission could manage $40 billion in federal relief funds, and could have bonding authority that would allow it to finance reconstruction efforts, though this authority would have to be conferred by the state legislature.

The issues to be faced by the new mayor and city council are profound and have implications beyond lower Manhattan. They will affect the future of the city, the metropolitan region and cities throughout the country. Those charged with planning for reconstruction will have to balance concerns about public safety with the need to protect New York City's vibrant and open street life, great social diversity, mobility and access to public places.

In facing these questions, there will be a strong draw toward technological fixes for the security problem: more sophisticated surveillance of public places by video cameras, more metal detectors, more barriers. By themselves, these do not make public places safer. One of the greatest assets of New York City, the advantage it enjoys over the sprawl and malls in the suburbs, is its rich, diverse and open environment. This is what has made it attractive to businesses, residents and tourists from all over the world. Ultimately it's the people, both in the business districts and the neighborhoods, that will guarantee a safe and livable environment. One would hope that the city's new commission and administration will work with all citizen groups as well as businesses to engage the public in an eminently public endeavor. Destruction of our great public life would be a second major blow to the open society.

Tom Angotti is a professor of urban affairs and planning at Hunter College and co-chair of Planners Network.

Spread The Wealth To The Boroughs

Embedded in this tragedy is an opportunity to "re-plan" New York City. I don't pretend to be an expert, but here are my thoughts:

1. We must disperse the "centers of intelligence" and "centers of business". While this may go against the trends of history, we must keep in mind that (a) terrorism is likely to occur again in New York City, (b) a natural disaster such as an earthquake is likely within the next 25 years, (c) modern technology allows distance to exist between "hubs" and should be exploited. In order to support this, our electrical power grid, our telephone grids and our transportation grids need to be reevaluated and potentially restructured so that damage to one part of New York City does not guarantee disaster for all. While some may say that this is the case now, I point to the fact that key businesses came to a halt, that the closure of bridges and tunnels and highways after this incident isolated many from their jobs (who were not in the Wall Street area), etc.

2. Other geographic areas of New York City warrant development. The "outer boroughs" have room for large businesses to expand - particularly upwards - and provide economic opportunities and a better quality of life for all. Accordingly, the transportation infrastructure should reflect this as well. It should be easy for Connecticut commuters to come to Queens and eastern areas of Brooklyn as well as the Bronx. It should be easy for NJ commuters to access Staten Island, Brooklyn and the Bronx. Where we have built cities of public housing to warehouse the poor we can also build midsize buildings to provide jobs and spur educational excellence (which, unfortunately, would also increase rents and housing prices ...)

3. The current World Trade Center site should become an expanded ferryport, conference center and park with a fitting, large memorial museum. Americans need to have access to every horrible aspect of this event to remind us and future generations just as we support the Holocaust museums and memorials. It would be both shameful and dangerous to simply "rebuild the Trade Center".

We are all of course trying to come to grips with what the events of Tuesday mean, and will mean. It has been a terrible disaster, and the immediate loss of life is incredible.

But I think it will have a major long-term impact on life here, morally, economically, politically, urban life --- all for the worse There will be major impacts on New York City in particular, and perhaps high-density big cities generally, in the direction of decentralization and further divisions and walls. I would guess a reduction in personal travel, more emphasis on electronic communication. Employment patterns will change; hyper-concentrations of jobs in service-center-oriented office buildings (and both the high and the low-paying jobs associated with them) will shrink. The benefits of the agglomeration economies that have accounted for the strength of select financial centers will be counter-balanced by new political considerations. I suspect the global status of at least New York City but perhaps other global cities will change, as multinational businesses change their spatial strategies in the search for security in more outlying areas. The focus will initially be within the same metropolitan regions (which is what American Express and Lehman Brothers have done), but over time will lead to wider dispersal to other regions or urban enclaves. The construction of glamorous ever-higher trophy skyscrapers will stop; the towers in Kuala Lumpur and Frankfurt have already felt the threat, closing and evacuating the day after the World Trade Center collapse, and workers in the Empire State building are afraid to go up to their offices.

The social consequence will be to exacerbate polarization, with those able to move where they live or work out of town doing so, those unable to do so remaining behind. The difference between the two groups will be both income and race related. The polarization will be both between city and suburb and within the city, with the focus of upper-income disproportionately white households concentrating in more tightly controlled citadels and others more and more excluded and segregated, with sharper dividing lines between and among groups.

And "security" will become the justification for measures that can threaten the core of social and political life, even though one conclusion that might be drawn from what has happened is that physical measures can never provide real security in the presence of deep social, including international, differences. Despite that, surveillance will increase and the uses of public space will be more tightly controlled (Mayor Guiliani has pioneered this with his restrictions on assemblies near City Hall, and attempts to limit the use of streets for parades, in the name of security). And we may expect the almost unlimited funding that the FBI and CIA are likely to receive to result in massive invasions of privacy; Senator Trent Lott has already called publicly for a reduction in the weight given civil liberties in the interests of security. "Public space" will become less public; free access and free use will be severely limited. By contrast, controlled spaces, such as malls, will increase their attraction.

What Can Be done at the City Level for New York City?

1. Avoid the hunker-down, fortress mentality, with police, check-points, metal detectors, limited access everywhere. Risk management suggests that the costs, in terms of everyday life, business activities, democratic conduct, must be taken into account in plans to avoid the dangers of terrorism. The quality of urban life is what brings people to cities and makes living there worth while; don't kill it.

2. Focus on improving education and economic conditions for the city's lower-income residents, as the mainstay of its population. The choice is between further exclusion, or real and steady improvement and connection with the city's mainstream economic, social, and cultural life. Exclusion, walls, separation cannot provide security; acceptance and shared fortunes can.

3. Make it clear the city is a welcoming city for all peoples, that we do not confuse culture with cause, that we are and will remain an international city and a multicultural city; brag about it.

4. Economic development policy must continue to be concerned with the needs of major transnational corporations, but attention must increase to the needs of smaller-scale businesses (local as well as nationally and internationally-oriented) that draw on the unique skills and talents of the city's actual residents, including creativity, imagination, hard work, and social commitment. The weight of subsidies should go to such locally-based activities.

5. Cultural work - artistic, literary, inventive, scientific, media, research, educational - should be supported as the motor of the city's economic and social life.

6. The attack will cause a major shift in private market real estate prices in downtown Manhattan and in office clusters throughout the city. Watch developments closely, and if excess profits are being made, if speculation threatens stable business activities, consider forms of control, from commercial rent regulation to speculation taxes on real estate profits to planning policies channeling growth.

7. Maintain mixes of uses and occupancy and building types, avoiding homogeneous concentrations of activities either at the high or low end of the economic ladder; avoid both attempting to maintain citadels and permitting ghettos, and encourage contact across social and physical dividing lines in the city.

8. Invest heavily in mass transit. The inevitable move of businesses from within to outside the city, with the attendant pressure for easier commuting, should be resisted - balanced against - the facility of moving about the city itself free of congestion, making staying in the city more efficient as well as providing environmental and tax benefits.

10. Lobby for state and national legislation preventing fiscal competition among cities to attract businesses (a zero-sum game for cities, a transfer of wealth from public to private hands), akin perhaps to the European Union's anti-subsidy rules.

11. Rebuild the twin towers? Certainly not as it was (it couldn't be marketed anyway), or with even more beefed up security. What should be done at the site should not reflect the arrogance of power, but rather the sorrow of its history and the admission of human vulnerability, as well as the resilience of continued and vibrant life. Waiting and thought and public discussion are in any event necessary; recommendations for action after a great loss are always to let time go by and emotions settle. Planning for it should be a symbol of the very democratic processes that terrorism puts at risk.

Peter Marcuse is a professor of urban planning at the Columbia University Graduate School of Architecture, Planning and Preservation