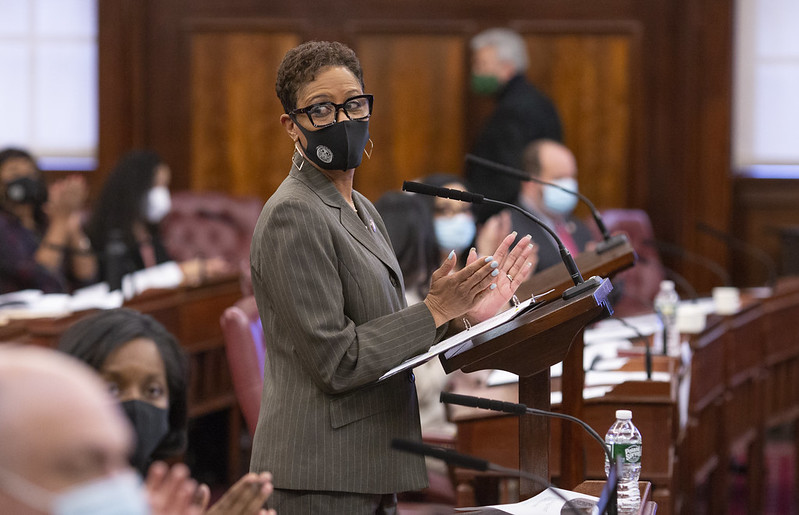 With a new City Council class and new speaker leading the legislative body, there is another opportunity to change the Council’s internal rules, which haven't been formally revised since 2014.

It's a relatively obscure corner of public policy because in a city of 8.8 million people the rules apply only to the 51 elected Council members and a few hundred Council staff. But Council members and advocates have for years pointed to measures that could make the body's processes more democratic and transparent, and impact the law-making and budgetary decisions felt directly by millions of constituents.

Speaker Adrienne Adams, just two months into her new role at the helm, has said her staff is examining Council rules but hasn't indicated what, if anything, could change and if changes would be made administratively or through the official rule-making process.

Council rules determine how legislation is drafted, debated, and advanced, how important benchmarks are communicated publicly, and other ways the city’s legislature is run and governed internally. They also lay the ground rules for how Council resources, from staffing to discretionary funding, is allocated – tools at times used by the speaker to reward and punish members.

Most of this City Council is newly-elected, and it includes many ‘firsts,’ including the first Black speaker and first female majority. Adams has promised a collaborative leadership style, but it is to be seen if she will back formal rules changes to democratize the Council. New committee assignments have been made, and as Adams begins to show how she will lead the Council, the new speaker has hired a number of top aides who in many ways run the day-to-day of the Council, along with mainstays of the Council’s central staff. Jockeying for legislative and budget priorities has begun, as has the Council’s examination of Mayor Eric Adams’ preliminary budget, initiating a period in which Council speakers typically exercise their most influence.

New York City's good government groups are calling on Adams to hold a hearing on Council rules with the hope of paving the way for possible changes. In a letter to Speaker Adams last month, the groups – Citizens Union, Common Cause New York, New York City League of Women Voters, NYPIRG, and Reinvent Albany – urged the speaker to hold a hearing before approving rules for the current 2022-2023 session.

"With more than two-thirds of Council Members new to the office, the beginning of this Council session provides an opportunity to turn New York City's legislative body more collaborative, efficient, transparent, and accountable," reads the letter.

The groups did not propose specific changes in the letter but current and former Council members have expressed interest in reforming procedures to give rank-and-file members more control over advancing legislation and City Council resources.

High on the list for many is amending the body's so-called "first-in-time" policy, which gives priority to the earliest member to request bill-drafting services from the Council's central staff on similar legislation. The practice allows lawmakers to anonymously sit on draft bills indefinitely, at times blocking their introduction and frustrating other members who want to see their version of the bill introduced, considered, and passed.

"There are a lot of really great legislative ideas that have sat in a closet somewhere for many many years, for whatever reason, and they'll continue to sit there because this rule exists and it prohibits the rest of us from being able to move on those issues," said Council Member Diana Ayala at a forum of Council speaker candidates in November, hosted by the Working Families Party.

Members tried to get around this in 2017, when they proposed adding deadlines to introduce legislation as part of a package of over 30 measures supported by more than half the Council, including Adams and Council Member Corey Johnson, then one of eight candidates for the speaker's chair who went on to become Council speaker from 2018 through 2021. They included greater membership involvement in Council policy and budget negotiations, more discretion to committee chairs on staffing matters, childcare for members and staff, and added resources to key committees like Land Use and Oversight and Investigations. It also called for a public hearing.

When he took the speakership in 2018, Johnson made a number of changes administratively and left others on the table without holding a hearing or formally amending the Council rules.

The Council voted to significantly increase its budget and increased staffing for land use, finance, and legislative services. It created a dedicated investigations unit trained on city agencies. Johnson also made adjustments to the new bill-drafting unit that had begun under his predecessor, Melissa Mark-Viverito, but the first-in-time policy and others that frustrated members and advocates remained. While the Council has been democratized over the years, especially through changes made under Mark-Viverito in 2014, the speaker’s office and central staff of the Council retain significant power over what bills wind up being drafted, introduced, heard, and passed.

A spokesperson for Speaker Adams told Gotham Gazette it is "a priority to strengthen the Council as an institution" but did not respond directly to specific proposals, including several repeatedly cited by Council speaker candidates during last year’s race, or the call from advocates to hold a hearing.

“The Speaker and her team are examining Council rules and operations, engaging members and staff, and taking a broad view to improve the Council to ensure the body is an effective and strong co-equal legislative branch of city government," the spokesperson wrote in an email.

"The Speaker has been meeting with staff, investing in departments and leadership, and addressing internal functions," they wrote. "This all is key to making sure New Yorkers have the city government they deserve, and it requires collaboration, intention, and time.”

The spokesperson would not say whether Adams still supports the reforms she endorsed in the 2017 package.

It has been eight years since the last public hearing on Council rules in February 2014. That year Mark-Viverito and then-Rules Committee Chair Brad Lander, now the city comptroller, enacted a number of groundbreaking changes to diffuse some of the speaker's power over the body and insulate members from punishment when they act independently. Among the biggest changes was standardizing the discretionary funding members can distribute to nonprofits in their districts with a new formula to disburse additional funding to underserved areas. Another established the bill drafting unit that Johnson later shored up.

"Where I think we really made a difference was on discretionary funding, member items, which before that had really been used as a tool for reward and punish in which communities and often the lowest income communities suffered," Lander said in an interview. Previously, some members controlled expense and capital budgets ten times greater than others, he told Gotham Gazette.

"On the other hand, one area where we fell really short in 2018 was around legislative drafting and transparency in that system," he said. "A piece of the problem is that a first-in-time system without an expiration date creates a kind of black hole for legislation, which is very frustrating for members and advocates."

Changing the first-in-time policy is currently being discussed among Council leadership, according to Council Member Gale Brewer, who chairs the Committee on Oversight and Investigations and recently returned to the Council after a prior stint from 2002 through 2013 and then eight years as Manhattan Borough President.

"I believe that's one of the suggestions that is not going to be thrown out the window. That's what we got promised so I would assume that would happen," she said of discussions with the speaker's office.

According to Brewer, there are hundreds of bills leftover from the previous session that have yet to be assigned sponsors in the new City Council.

Brewer and other members have also said they want to see more notice when bills are aging or bill amendments are introduced, and more room to debate bills in committee meetings and floor discussions. Brewer also wants to see the Council move towards a hybrid physical-virtual public participation model, something the good government groups' letter alludes to, which could require changes to the state's Open Meetings Law. Currently, committee hearings are being held virtually but full-body Stated Meetings of the Council are in person.

Citizens Union wants to see the Council set up an email notification system where the public can sign up to track bills, committees, or issues, similar to one used by the State Senate. "If you don't work in politics, it can be hard to keep track of what Council members do," said Citizens Union policy director Ben Weinberg. “The easier we make it for people to follow legislation, agendas, and meetings, the more people we'll see engaged, beyond just lobbyists and folks in politics."

This past fall, the current Rules Committee chair, Keith Powers, who also endorsed the 2017 package as an incoming member, proposed ten Council reforms when he was contending for the speakership, the most robust reform agenda of any of the speaker candidates. It included changing first-in-time, transparency around bill aging and amendment, increasing units of appropriation in the budget, equity in capital funding, giving committee chairs more power to advance legislation, and staff development, among others.

"We don't talk about staff enough. I think staff could certainly use ongoing training on important issues like land use and budget and legislation," Powers said at the Working Families Party speaker candidate forum in November. Powers declined to comment for this article through a spokesperson.

Ben Kallos, a former Council member who hit his term limit last year, said standardizing member items was "a big deal" but it still left the speaker's own discretionary funding, worth tens of millions, as a tool to incentivize and penalize members.

"That is one of the last vestiges of the full speaker power and there are a lot of members where that money is incredibly important to their communities," he told Gotham Gazette. Johnson allegedly used discretionary funding to penalize members who voted against his budget in 2020 over a fight to defund the NYPD.

Susan Lerner, the executive director of Common Cause New York, said the system for assigning bills has often left central staff with too much discretion to control the flow of legislation and too little accountability. Members cannot see who else has requested bills making it difficult for like-minded members to advance legislation.

"It became a very political determination and it was a completely opaque selection process," Lerner said. "It's working the exact opposite way that that situation should work from a reform point of view."

Common Cause has recommended a number of reforms including eliminating member items completely, regulating the speaker's discretionary funding, "fast-tracking" bills sponsored by a majority of members, enacting strong sexual harassment deterrents, improving the Council's website, and reducing the number of committees, among others.

"No question we have too many committees," said one Council member, speaking anonymously. Because of other Council rules requiring committees to meet monthly, "you see hearings on nonsense," the member said. "They struggle to come up with a topic just so that a committee has a reason to vote."