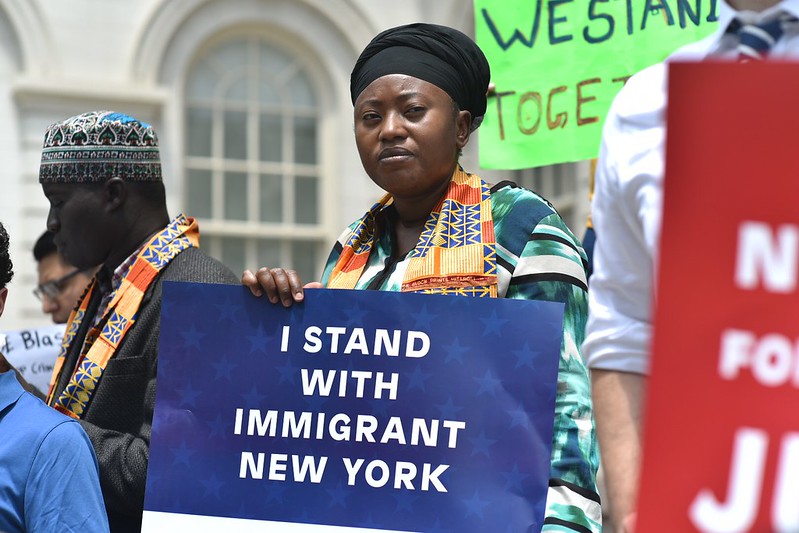 The agenda comes just after the New York City Council released its formal response to Mayor Eric Adams’ $98.5 billion preliminary budget, released in February, for the 2023 fiscal year, which begins July 1. Adams’ spending plan included cuts across most city agencies, leading to criticism from some that it is “an austerity budget” without enough investment in a variety of acute needs. The Council’s response calls for billions more in spending on services and infrastructure, as well as more deposits in city reserves based on higher expected revenue totals.

Make the Road New York echoes some of those priorities with its own particular focus on immigrant communities.

“It really reflects what the needs are in the community,” said Kenny Minaya, Make the Road’s director of government affairs, about the policy agenda. “We're still in the midst of the pandemic, although I get our elected officials want to move on. We want to make sure that all communities in the city, Black and brown immigrant communities recover and that there’s special attention paid there. It's really about kind of rethinking how we emerge from this pandemic and making sure that we're taking an equitable approach.”

The group has several major demands to tackle housing affordability and homelessness. Chiefly, calling on the administration to deepen housing affordability through the Mandatory Inclusionary Housing program, which mandates that developers build a certain amount of rent-restricted housing when seeking upzonings from the city. The de Blasio-era program is initially hailed as a means to increase affordable housing but critics say has not reached enough people at the lowest levels of affordability.

Make the Road also calls for greater enforcement against landlords who ignore repairs or harass tenants and an expansion of eligibility for city-funded FHEPS voucher. The vouchers currently provide supplemental rent to rent-controlled tenants, military veterans, and clients of adult protective services, and Make the Road wants them to be expanded to households that are at risk of eviction.

The group’s biggest budget demand is a complete divestment from policing in schools and “a DOE budget that reflects the needs of students that's more centered on supporting our students as opposed to gearing them up for the school-to-prison pipeline,” Minaya said. The group is calling on the mayor to remove all police officers from schools citywide, eliminate metal detectors and surveillance equipment, and reinvest the $450 million currently spent on the NYPD’s school safety division towards young people instead. They are also pushing the administration to refuse to fill 1,363 vacancies among school safety agents. Adams has reversed the planned transfer of school safety officers from the NYPD to the Department of Education.

Make the Road also wants an additional $118.5 million for a citywide expansion of school-based restorative practices, which eschew traditional punitive discipline in favor of social and emotional learning and conflict resolution. That goes hand in hand with the ask of $150 million for hiring 500 new school counselors and social workers, with a goal of achieving a ratio of one social worker and one guidance counselor for every 150 students in most schools, and one for every 50 students in high-need schools over the next five years. Another $75 million is included in the agenda for hiring 500 community members in supportive positions and $5 million to baseline funding for mental health services in schools.

“This conversation is particularly important now as everybody is kind of rethinking public safety,” Minaya said. “We want to…reiterate that you can't have public safety without investments in the community. Communities must thrive and that's a big component of public safety.”

The NYPD’s Vice Unit has long been a target for police reformers who have pushed to decrminalize sex work in the city and state, and Make the Road is advocating for reallocating the unit’s $18 million budget to services for sex workers. In particular, the group wants the funding to be redirected to the COIN Clinic in Callen Lorde facilities, which provides free health care to sex workers, to legal representation, education services, and non-profits that work with sex workers.

“The funds that are being given to the police can be given to us so that we're able to work and we're able to not be discriminated against in society,” said Dulce, a trans woman and sex worker who is a member of Make the Road, through a translator.

“It's important for the mayor to take our voice into consideration, to no longer give any more funds to the police and instead give that money to our communities,” she added. “For example, for us to be able to have a place to live, for the money to be invested in programs so that we can learn the language, programs for us to have better job opportunities.”

Make the Road is calling for targeted investments by the city to prevent deportations of immigrants including $1 million in baselined budget funding for the Rapid Response Legal Collaborative which provides counsel to those at risk of deportation or ICE detention. It also wants the City Council to continue maintaining a minimum of $16.6 million for the New York Immigrant Family Unity Project, which gives legal counsel to almost all individuals in ICE detention facing deportation. In addition, Make the Road calls for new legislation that would give individuals the ability to file suit if they are wrongfully detained by the NYPD, Department of Correction, or the Department of Probation at the request of federal immigration authorities.

Also included in the platform are broader protections for the city’s most vulnerable working-class New Yorkers. Make the Road calls on the Adams administration to restore and baseline $4 million for the Low Wage Worker Initiative, which provides funding to a coalition of legal service groups that help workers with wage theft and discrimination claims. They also called on the City Council to increase funding for its Low Wage Worker Support initiative to $1 million; the initiative funds community groups that educate and inform workers of their rights in multiple languages.

Last year, New York City established “just cause” protections against termination for fast food employees to give them greater job stability. Make the Road wants those protections extended to all low-wage industries where workers would otherwise be discouraged from reporting workplace violations for fear of being fired.

Mayor Adams’ proposed preliminary spending plan reduced budgets across the board for almost every city agency including the Department of Consumer and Worker Protection (DCWP) and the City Commission on Human Rights (CCHR), in part by removing unfilled but budgeted positions and targeted efficiency savings identified by the individual departments. Those agencies are at the forefront of tackling the workplace issues that Make the Road members face, and the organization is calling for those specific agency cuts to be restored to avoid staffing issues and insufficient essential services.

Make the Road also wants the City Council to renew funding for the Job Training and Placement Initiative, which includes $5.25 million for the Consortium for Worker Education “Jobs to Build On” program and $2.2 million for Worker Service Centers.

Make the Road wants the Council and mayoral administration to make key investments in health care for immigrants and the city’s broader populations that suffer from the lack of it. The Adams administration should, the platform says, put at least $100 million each year to fully fund the NYC Care program that gives free and low-cost services to those who cannot qualify for or afford health insurance. And the Council is asked to expand funding for certain programs including increasing funds for the Access Health Initiative to $4 million, allocating $2.3 million to the Managed Care Consumer Assistance Program, and maintaining funding for Ending the Epidemic program at $7.7 million, and the Immigrant Health Initiative at $2 million.

In order to combat increasing incidents of hate violence, Make the Road also calls for $1 million in renewed funding for the city’s Hate Crime Prevention initiative, which supports community-based organizations that work to reduce hate violence and serve communities that are most vulnerable to it.

Make the Road is among many stakeholders that are attempting to have their requests approved in the city budget, which is far from final with almost three months till the July 1 deadline for the next fiscal year. The mayor will soon issue his executive budget, which will be followed by another round of hearings by the City Council before more negotiations and attempts to influence the final budget deal.