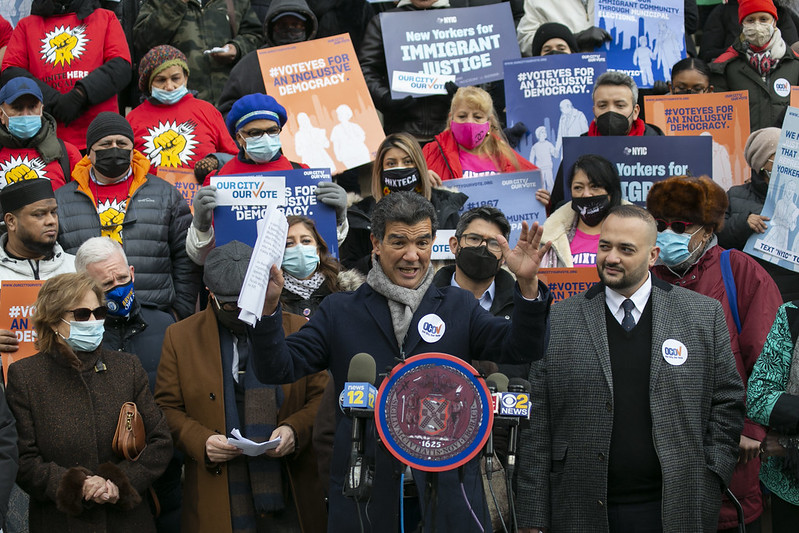 In January, the “Our City, Our Vote” law went into effect, allowing hundreds of thousands of noncitizens in New York City to vote in municipal elections. While there’s many months until they’ll be able to cast their votes, the New York City Council wants city officials and election administrators to be well prepared and conduct outreach to raise awareness, and is calling for $25 million in the next city budget to fund the implementation of the law.

The new law allows legal permanent residents and those with work authorization to participate in local elections for Mayor, Comptroller, Public Advocate, Borough President, and City Council. According to estimates from the Mayor’s Office of Immigrant Affairs based on , it will make about 808,000 city residents, including 622,000 legal permanent residents (green card-holders), eligible to vote starting January 9, 2023. As of February 21, there were about 5.1 million registered voters in New York City, according to data from the state Board of Elections.

The law was championed by former City Council member Ydanis Rodriguez, now the commissioner of the city’s Department of Transportation, as well as other Council members like Carlos Menchaca, the immigration committee chair, and advocates like the New York Immigration Coalition. Then-Brooklyn Borough President Eric Adams expressed support for the proposal while running for mayor last year.

Under the law, the New York City Board of Elections has until July 1, the start of the new city fiscal year, to submit a report to Mayor Eric Adams and the City Council with an implementation plan. But the mayor, in his $98.5 billion preliminary budget proposal, did not allocate any new funding for the BOE to carry out such a plan, nor funding for any city entity, like the Mayor’s Office of Immigrant Affairs, the DemocracyNYC office, or the city’s Civic Engagement Commission, to perform other outreach efforts.

The City Council, in its official response to the mayor’s preliminary budget, called for the $25 million investment to support the implementation including community outreach to inform potential voters, registration assistance, Get-Out-The-Vote efforts, language access, interpretation and translation services. Some of those efforts are already carried out by the New York City Campaign Finance Board, an independent city agency that does voter outreach and education, often through its NYC Votes initiative, whether additional funding is provided to it or not.

“This is absolutely critical for us to center immigrant communities especially through…the impact that the pandemic has had on our immigrant communities,” said City Council Member Shahana Hanif, a Brooklyn Democrat who chairs the Council’s immigration committee. Hanif also co-chairs the Council’s progressive caucus, for whom implementing the law is a top priority. “We ought to be a city that is forthright about expanding democracy and making it more representative and ‘Our City, Our Vote’ is the path forward,” she said.

“The mayor showed commitment to ‘Our City, Our Vote,’ and so I hope that he remains firm in that commitment…Now we need the dollars to really match the needs of implementation,” she added.

A spokesperson for the mayor did not provide comment on whether the mayor would add the requested funding to his executive budget, which is expected to be released Tuesday, April 26.

“The mayor has to put the resources behind it,” said Council Member Shekar Krishan, a Queens Democrat who represents another district with a high percentage of immigrants and immigrant communities. “It is the law of the land in the city of New York and it's finally a way to make sure that so many New Yorkers who have not had a voice in the political process yet are the essential communities of our city, now finally have a voice.”

“We are enfranchising people who have systematically been disenfranchised,” he added.

Ben Weinberg, director of public policy for Citizens Union, a government reform group, said that the funding will be necessary for the Board of Elections to set up technology to handle a new category of voters, including a protected database, new voter registration forms, and separate ballots. Noncitizen voters will only be eligible to cast ballots in elections for city government positions. The BOE will also have to train poll workers to implement new procedures and figure out how to maintain voter lists that interact with the state voter database.

“These are new but very solvable issues, and the implementation of [Ranked Choice Voting] has shown us that the city BOE is very capable of implementing new, somewhat complex voting technologies,” Weinberg said. “We’ll need to see the Board’s implementation plan, due on July 1, to assess their progress and timelines, but implementation needs should be fully funded in the coming budget. Of course, the city will need to spend a lot more time and money on an effective, multilanguage public education and outreach campaign.”

The city does face some hurdles over the law. The day after it went into effect, Republican Party members and elected officials filed a lawsuit claiming it was unconstitutional and violated state election law. The lawsuit is ongoing and, on April 13, a state supreme court judge gave the parties until May 9 to file a motion for summary judgment. A number of voting rights and advocacy groups have also joined the lawsuit to defend the law including LatinoJustice PRLDEF, the Black Alliance for Just Immigration, the Asian American Legal Defense and Education Fund, and the Council on American-Islamic Relations.

At a February 28 hearing of the City Council, BOE officials testified that they were on track to meet the deadline for an implementation plan, though they await the conclusion of the legal challenge. BOE Executive Director Michael Ryan said the agency doesn’t necessarily need a significant allocation to administer the various requirements of the law. “From a budgetary perspective, it is not a house-on-fire emergency to deal with right this minute,” he said.

All 51 seats of the City Council will be on the ballot in 2023, as mandated due to the decennial Census and redistricting process. Then there will be another full city government election cycle in 2025. There could be special elections at other times.

Theodore Moore, vice president of policy at the New York Immigration Coalition, said the Council’s $25 million request is in line with previous allocations to the BOE for implementing new election law changes including the expansion of early voting and automatic voter registration. “So this is actually right in line with what the city has done in the past,” he said.

The funding, Moore said, should go to community-based organizations that can conduct outreach in immigrant communities. “There's gonna be over 800,000 eligible new voters…and obviously, these new voters are not just in one area of the city. So we're going to have to have a truly citywide effort,” he said.

Under the law, noncitizens would need to be residents of the city for at least 30 days before they can register to vote, a provision Mayor Adams expressed some reservations about, calling it a short duration, despite his support for the bill. Those residents would have to otherwise meet the state law’s requirements to vote.

According to MOIA’s estimate, that would be 808,000 new eligible voters, a number derived from the U.S. Census’ 2019 American Community Survey data, augmented with a separate analysis of the economic profile of immigrants in the city conducted by the Mayor’s Office for Economic Opportunity. Out of the 622,000 green card holders among those residents, 34.9% live in Queens, 27.1% in Brooklyn, 18.6% in the Bronx, 16.2% in Manhattan, and 3.2% in Staten Island. Immigrants from the Dominican Republic and China are the two largest ethnic groups.

Besides the additional $25 million, Moore said he would like to see budget increases for all the other related agencies which will also have a part to play in implementing the law including the Civic Engagement Commission, the Campaign Finance Board, the Department of Youth and Community Development, and the Mayor's Office of Immigrant Affairs.

Supporters of the law don’t seem concerned about the lawsuit.

“In spite of the lawsuit, we're seeing parts of the law that are being implemented, because all parties involved understand that we need to move forward with this,” said Moore.

“I'm not worried. I know we can get this done,” said Hanif. “And I'm fully committed to ensuring that we stay on track with the timeline.”