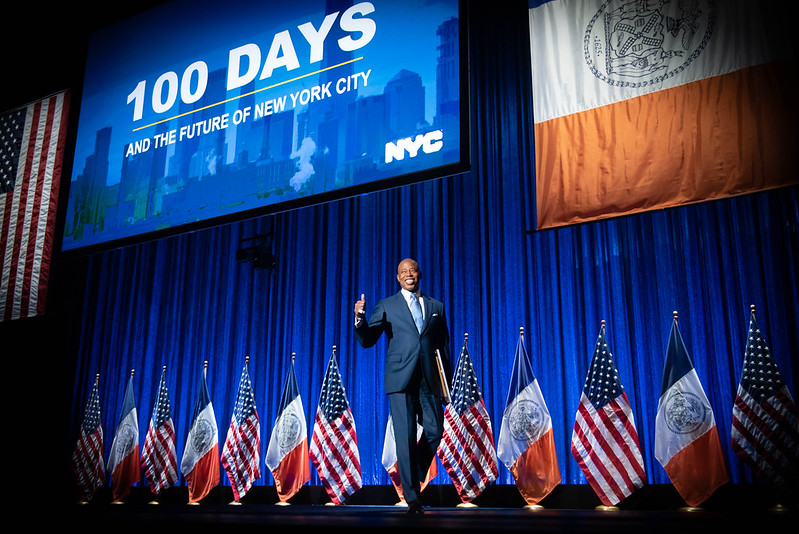 At his first State of the City address on Tuesday, Mayor Eric Adams celebrated the accomplishments from his first 100 days in office, outlined his vision for the city’s future, and released a $99.7 billion executive budget for next fiscal year.

“The state of the city is strong, because New Yorkers have never been stronger,” Adams said at the historic Kings Theater in Brooklyn, in a speech punctuated by optimism about the city’s prospects but also grim realism about tragedies of recent months and the many crises it faces.

The mayor recounted the tough first months of his tenure that have been marked by a continued increase in crime and several major incidents including a deadly Bronx fire and killing of two police officers in January and the recent subway shooting that rocked the city.

In speaking about the lingering trauma of the pandemic and the need for an equitable recovery, Adams compared his circumstances with those facing President Franklin Delano Roosevelt during the Great Depression. “Then, just as now, there was no easy solution or quick fix,” he said. “FDR understood that the people needed an honest reckoning of the problems and bold plans to solve them. That is what I intend to deliver for my fellow New Yorkers.”

Early in his speech, the mayor identified four main pillars of his vision: “Protecting our people, growing our economy, uplifting our youth, and building our infrastructure.”

Adams repeated his mantra of “Getting Stuff Done” for New Yorkers as he touted several achievements from his first 100 days in office. In that time, he noted, the NYPD has taken 2,300 guns off the street, the city has recovered 50,000 jobs and unemployment has fallen to 6.5% in March, down from 7.4% in December. Demand for hotel rooms is at 86% of pre-pandemic levels, up from 63% in January, more than 97% of New York City adults have received at least one covid vaccine dose, and there has been a nearly 70% increase in school attendance. The city has added almost 1,000 new shelter beds for homeless New Yorkers, moved 2,500 families into shelters, and placed 2,700 people into subsidized housing.

As Adams acknowledged, there is clearly still much work to be done on public safety and health, education, homelessness and housing, and more. While some of the numbers he cited also gloss over deeper problems related to gun violence, major gaps in covid vaccination rates, chronic student absenteeism, and more.

Adams also pointed to measures funded in the recently-adopted state budget that he had championed including an expansion of the Earned Income Tax Credit, which will provide $350 million in credits to low- and moderate-income families, and $4 billion over four years to fund child care subsidies in the city as well as new tax breaks to help spur additional child care space. The mayor announced that new child care subsidy rates will go into effect June 1, reducing the weekly fees for subsidized care for a family of four earning $55,000 a year from $55 a week to just $10 per week.

“But this is only the start of our efforts to revitalize and rebuild this city. Now is the time to look to the future,” he said.

Adams repeatedly stressed his core philosophy that “Safety and justice are the prerequisites of prosperity.” At one point he spoke directly to the family members of people killed in violence in the city, who were in attendance.

He employed other symbolic gestures in the address as well. When he spoke of tackling homelessness, he thanked advocate Shams DaBaron, who stood up in the audience. Similarly, he reiterated his support for unions by calling on Chris Smalls and Derrick Palmer, the labor organizers who led the way in creating the Amazon Labor Union, the first union of Amazon workers in the country based on Staten Island.

In a break from his predecessor, Adams presented his executive budget proposal in the same speech, intertwining a look back at his first 100 days, elements of his policy and programming vision, and related funding decisions and proposals.

The new iteration of his plan for the 2023 fiscal year, which begins July 1, increases spending by $1.2 billion over his February preliminary budget, adding new spending on public safety, education, youth employment, sanitation, food security, and immigrant services, among other areas. Through the capital budget, it massively increases infrastructure spending, including for housing, street safety improvements, bus and bike lanes, parks, and more. Both the expense and capital budgets must be negotiated with the City Council ahead of the July 1 deadline.

Adams and the Council are working with massive amounts of federal pandemic aid and higher-than-expected tax revenues.

As State Comptroller Tom DiNapoli noted on Tuesday, the proposed FY23 executive budget includes the use of $5.3 billion in surplus funds from the current fiscal year, which brings total projected FY23 spending to nearly $105 billion.

While Adams has pushed city agencies to identify savings and he has eliminated some vacant positions across many departments, his much-touted approach to belt-tightening is proving far more limited than he had previously indicated.

“This budget puts people, especially those who have often been left behind, front and center,” Adams said. “Success won’t be measured by how much we spend, but how much we accomplish.”

The executive budget adds $256 million for public safety initiatives, particularly funding for the mayor’s Subway Safety Plan released in February. That number includes $55 million to expand the Behavioral Health Emergency Assistance Response Division (B-HEARD) initiative — which sends mental health professionals to respond to certain 911 calls instead of police officers. About $171 million of those funds will go to adding 1,400 new Safe Haven and stabilization beds for unsheltered New Yorkers to help them off the streets and out of the subways. The funding will also help create a dedicated gun crime unit in the Office of the Medical Examiner to expedite DNA analysis.

Adams allocated an additional $285 million for education and youth employment. That includes $101 million to add 10,000 slots to the Summer Rising program, which provides summer learning and enrichment courses. The funding will increase the programs total capacity to 210,000 slots for K-12 students.

“What often gets less attention are the upstream solutions. These investments we are making in our most vulnerable brothers and sisters will help keep them and our entire city safe,” Adams said.

The mayor also put $7.4 million towards creating new dyslexia screening sites and literacy programs, $33 million for the Department of Education for new career pathways programs focused on the health care and technology sectors, $5 million for the City University of New York (CUNY) to train students and connect them to jobs, and $11.2 million for bilingual education programs.

“If we want to tackle high unemployment in communities of color, we must actively create opportunity. That means educating our youth for the jobs for the future and providing provide the direct on ramps to those jobs.

The mayor also allocated $118 million more in funding for parks, the city’s streets master plan, to restore an organics recycling program, and for a recently-launched trash containerization pilot program.

Another $51 million will be used to increase funding for the Emergency Food Assistance Program, home-delivered meals for seniors, to expand the NYCHA farms program, and fund plant-based lifestyle medicine in the municipal hospital system. About $10 million more will be spent on language access, interpretation, and translation services for immigrant communities. Part of that funding is specifically dedicated to services to support Ukrainian New Yorkers impacted by Russia’s invasion of Ukraine.

The executive budget proposed an almost $31 billion budget for the Department of Education, about $213 million higher than the mayor's preliminary budget proposal but nonetheless a $613 million decrease from the budget that was adopted in June last year.

While the mayor had promised that he would keep the NYPD budget largely flat, he added about $182 million to the department since the preliminary budget, for a total of nearly $5.6 billion. Overall, the department's budget would increase by $152 million over last year's adopted budget.

Seemingly in response to critics of his budget, including the City Council, the mayor also added funding for social services and spending on homelessness. The budget for the Department of Social Services increased $118 million to $10.8 billion in the executive budget. Overall, however, that reflects a $363 million cut from the budget adopted last year. The Department of Homeless Services budget increased to nearly $2.4 billion, up $205 million from the preliminary and $146 million overall from last year's budget.

Adams also made major new capital investments in his executive proposal, though he reduced the overall capital budget significantly. His executive capital plan for FY 2022-2026 is now $94.9 billion, down from $100 billion in the preliminary budget, as a result of moving $5.1 billion in projects to out-years, likely a more realistic projection.

The mayor allocated $5 billion more in capital funds over ten years for the Department of Housing Preservation and Development and the New York City Housing Authority, failing to meet a campaign funding pledge he had made of $4 billion in capital funds each year. The new funding brings the city's total planned spending on housing to $22 billion over the next decade. "We're going to continue to evaluate during these tough fiscal times," Adams said at a Q&A at City Hall later in the day. "And the numbers we're at now is higher than where we have been historically. We have the highest level right now and we're going to continue to work with our housing advocates to to get this right. And I'm confident at the end of this four years of my administration, they're going to see that we're hitting the targets that we deserve."

Adams also proposed $488 million for the Department of Parks and Recreation to fund  initiatives including planting 20,000 trees every year, refurbishing and creating new greenways, and fixing older infrastructure like city pools. He called the investment a “significant down payment towards our ultimate commitment of 1% for parks,” referring to a campaign pledge to allocate 1% of the total expense budget to the Parks Department.

He also devoted $140 million for the redevelopment of the Hunts Point Produce Market, which provides 25% of the city’s fresh produce.

The budget added $200 million to the city’s Rainy Day Fund, bringing it to a total of $1.2 billion. In all, the budget proposes $6.3 billion in reserves, including $1.06 in the general reserve, $3.8 billion in the Retiree Health Benefits Fund and $250 million in the Capital Stabilization fund.

The new spending that Adams proposed was offset by additional revenues and savings. In the executive budget, estimates for tax revenue in the current fiscal year were $1.6 billion higher than in the preliminary budget and $392 million higher in fiscal year 2023. The new budget iteration also found $400 million in savings across the current and next fiscal year, building on the mayor’s Program to Eliminate the Gap (PEG) which he previously mandated for the preliminary budget. In total, the PEG identified $2.4 billion in savings across both fiscal years, including $564 million in efficiency savings at agencies, $1.4 billion by reestimating spending, $154 million in higher revenue reestimates, and $267 million from lower debt service costs.

The City Council will hold weeks of executive budget hearings in May.

City Comptroller Brad Lander praised the mayor for investing in important areas such as transportation, parks and shelters. “But more work remains to achieve a budget that learns from this crisis to be more prepared for the ones to come,” he said.

Lander called on the mayor to spend federal relief funds more efficiently, to put more away in the rainy day fund, and to invest “significantly more funding” in supportive and affordable housing. And he noted that the budget funds the hiring of 500 new Corrections officers “without making urgent reforms to the staffing management failures that have left our jails in crisis with nearly a fifth of officers calling out sick each week.”