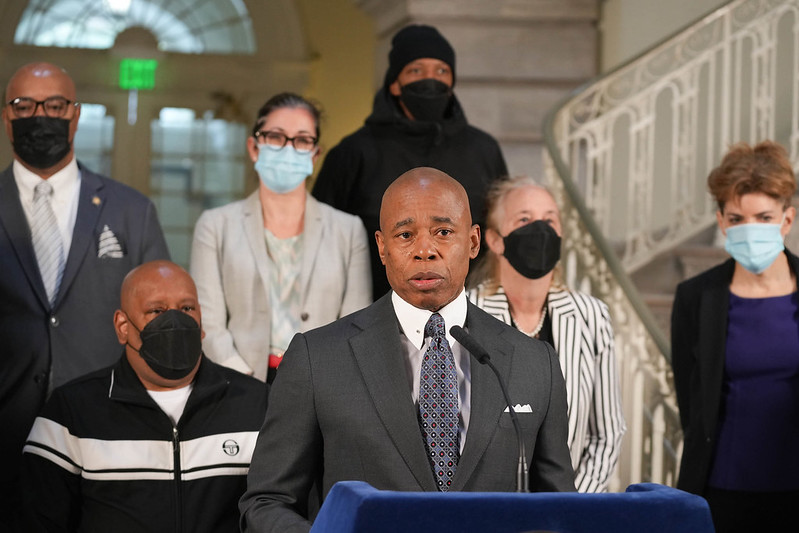 Mayor Eric Adams on Tuesday released a $99.7 billion executive budget proposal, a $1.2 billion increase from his February preliminary budget. Though Adams committed billions more in funding for housing and hundreds of millions for the parks department, he nonetheless failed to abide by major pledges he made while running for mayor last year.

As a mayoral candidate, Adams made sweeping promises for how he would lead the city. But on two fronts he was particularly specific. Urged on by advocates, he promised he would dedicate $4 billion in capital funds each year to housing – $2.5 billion to the Department of Housing Preservation and Development to build affordable housing and $1.5 billion to the New York City Housing Authority (NYCHA), public housing home to more 440,000 New Yorkers. Adams also pledged repeatedly that he would dedicate 1% of the city’s operating budget to the Department of Parks and Recreation to build more parks in underserved neighborhoods, hire more full-time staff instead of seasonal employees and carry out routine maintenance and repairs at 30,000 acres of parks and open space in the city, along with public beaches, pools, recreation centers and other facilities.

So far, he has done neither.

$4 Billion for Housing
During the mayoral race last year, United For Housing, a coalition of more than 80 groups, called on candidates to support a comprehensive plan for investing in housing that includes a $4 billion annual pledge of capital funds. Adams was among the eight major Democratic mayoral candidates who endorsed that agenda.

The City Council, in its response to the mayor’s preliminary budget, had also called for a $4 billion capital investment to build affordable and supportive housing in the city. ​​“Housing is New Yorkers’ top priority for creating safe and healthy neighborhoods,” said Speaker Adrienne Adams, in a statement. “We know the pathway to addressing homelessness is through affordable housing. Effective and thoughtful policies that help people remain housed and stable are in front of us; we just have to implement them.”

In his executive budget, however, the mayor proposed an additional $5 billion in capital funds over ten years, bringing the city’s total planned housing investments to $22 billion over a decade.

“We're going to continue to evaluate during these tough fiscal times," Adams said at a Q&A at City Hall on Tuesday, after his combined State of the City and budget address, though it is unclear what he meant by fiscal difficulties given the city is flush with funds. "And the numbers we're at now is higher than where we have been historically. We have the highest level right now and we're going to continue to work with our housing advocates to get this right. And I'm confident at the end of this four years of my administration, they're going to see that we're hitting the targets that we deserve."

The mayor also promised at his State of the City speech that he will release a detailed blueprint for housing and homelessness in the coming weeks.

At an unrelated news conference on Thursday, the speaker praised the mayor for adding funds to the budget for emergency rental assistance and housing assistance. "However, despite these bright spots, there are continuing areas of concern and interest for this council," she said, citing affordable and supportive housing development as one of her chief priorities.

Adams’ promises have also disappointed advocates, who say the new funding fails to come close to addressing the urgency of the housing crisis.

According to an analysis by New York Housing Conference (NYHC), the leading organization behind the UFH coalition, the new $5 billion will be split – $3.6 billion for HPD; $1.2 billion for NYCHA’s PACT program, which partners with private management of public housing; and $200 million for NYCHA repairs at Gowanus and Wyckoff houses.

In total, the capital dollars committed to HPD and NYCHA will amount to about $2.7 billion in the 2023 fiscal year, well below the $4 billion demand by UFH that Adams said he would fulfill.

“With tens of thousands experiencing homelessness, hundreds of thousands living in substandard NYCHA conditions, and millions facing rising rents, it is no surprise that the issue

New Yorkers are most concerned with is the lack of affordable, safe housing,” said Rachel Fee, NYHC executive director. “Unfortunately, the Adams administration’s modest capital increase for housing merely treads water and will not make a meaningful dent in this emergency.”

The new capital funding, Fee said, would be almost entirely swallowed up by raising inflation and interest rates for HPD, “meaning that those new dollars essentially maintain the status quo.” For NYCHA, the funding will maintain ongoing repair and maintenance efforts but would not lead to repairs at any additional homes, she said.

“While we are encouraged that [Mayor Adams] has increased housing spending at all, he has simply not done enough – and millions of his constituents across the five boroughs will pay the price,” she added.

The Coalition for the Homeless, an advocacy group, praised the mayor for including additional funds for shelter beds in his executive budget, but also said that his investments in housing were inadequate. “Unclear why @NYCMayor thinks it has historic investments in housing & homelessness,” the coalition said of the budget proposal, on Twitter. “His proposal leaves us treading water, and leaves neediest NYers swimming upstream.” The coalition suggested a series of solutions instead to meet the needs of unsheltered New Yorkers, including expanding the supply of supportive housing.

Percent for Parks
As a candidate, Adams wholle-heartedly endorsed a five-point parks equity plan created by New Yorkers for Parks, a nonprofit advocacy group. A major aspect of that plan was a parks budget equivalent to 1% of the city’s annual operating budget, which would amount to nearly $1 billion in the mayor’s nearly $100 billion executive budget.

However, Adams’ executive budget allocates $601 million to the Parks Department, up from $495 million in his preliminary budget proposal but nonetheless about $20 million lower than the budget that was adopted last year and well short of his pledge.

The mayor also has not followed through on the other aspects of the equity plan, including creating new parks, fixing the capital process to expedite park construction, and creating a new position for a Director of the Public Realm who has purview over outdoor spaces. Like with housing, the mayor and his top parks official — Parks Commissioner Sue Donaghue — have not released a comprehensive plan yet.

In February, when the mayor appointed the parks department’s new leadership, he already seemed to be hedging on his promise. He insisted that city agencies must find ways to cut spending to deal with a challenging fiscal environment, though the city’s fiscal situation remains relatively stable and strong.

“Right now, everyone must follow this exercise because we have to be financially sound for not only this year, when we have a lot of the federal dollars that are still available, but next year…And if we don't make smart decisions now it's going to impact us later,” he said at the time. “And our goal is to have that 1% [for parks] that you're talking about…While we deal with these emergencies that are taking place, there's a permanent arm of my office that is focusing on making sure we're reaching our long-term goals and those are one of those long-term goals.”

The mayor did add $488 million in capital funds for parks in his executive budget, “a significant down payment towards our ultimate commitment of 1% for parks,” he said in his State of the State speech. The new funding will go to planting 20,000 trees every year, refurbishing and building new greenways, undertaking repairs and increasing trash pickups, among other things.

“Mayor Adams' Executive Budget reflects an important step in the right direction, reversing the City's decades-long policy of severely underfunding parks,” said Adam Ganser, executive director of New Yorkers for Parks, in a statement. “However, the Mayor still has a long way to go in fulfilling his stated commitment to fund park operations at 1% of the city budget. His pledge of '1% for Parks' for expense funding is essential to ensure that our parks are equitable, safe, clean and accessible.”