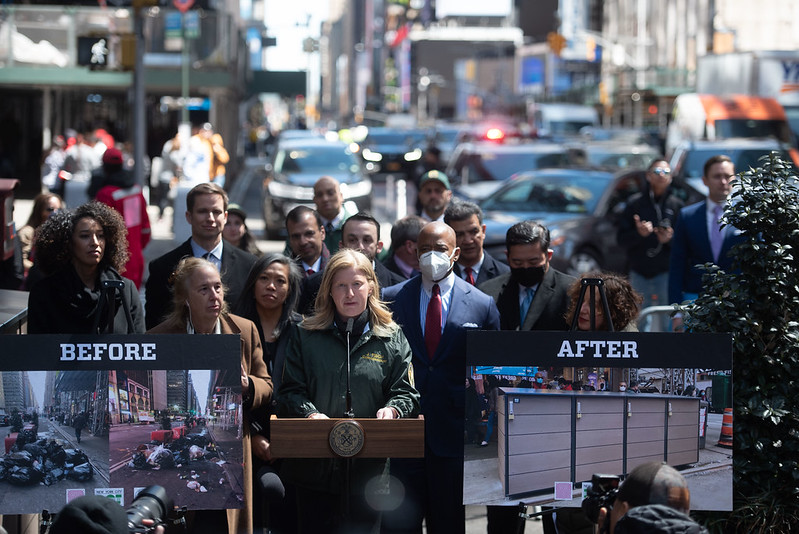 Trash and sanitation have become a top issue for the City Council in this year’s budget season, but Mayor Eric Adams’s $99.7 billion executive budget proposal for the 2023 fiscal year that begins July 1 failed to fund many Council demands. At a hearing on Tuesday, Council members questioned administration officials on their sanitation priorities — from corner basket pickups to composting — and their approach to a problem that has grown worse over the years and was exacerbated during the pandemic.

Mayor Adams proposed a $1.83 billion budget for the Department of Sanitation, a modest increase of about $50.5 million since the mayor’s February preliminary budget proposal. That increase includes $17.9 million to restore the city’s incipient organics collection program (AKA composting), $7.9 million for a waste containerization pilot, and $2.9 million for sweeping bike lanes, among other programs.

But, the Council had called for about $96 million in additions to the operating budget for the sanitation department and $1 million more in capital funding, most of which was left out of the mayor’s updated budget.

“If we cannot get the basics right, as in getting our corner baskets picked up, then I'm troubled by all the other things the department wants to do, frankly,” said Council Member Justin Brannan, a Brooklyn Democrat and chair of the Council’s finance committee.

“Sanitation affects public safety, public health, and environmental outcomes in every single neighborhood across the city,” said Council Member Sandy Nurse, also a Brooklyn Democrat and chair of the Council’s sanitation committee, in her opening remarks. “I, along with many New Yorkers, am impacted and we've all been a little bit disappointed in the level of sanitation service our city has received over the past two years, mostly due to the deep cuts made by the prior administration.”

As Nurse pointed out, former Mayor Bill de Blasio made significant cuts to the sanitation department at the height of the pandemic before partially restoring them. But the damage was done, as evidenced by sanitation complaints, which spiked last year via 311 calls.

Mayor Adams sees the city’s cleanliness and quality of life as inextricably linked with its recovery and crucial to restoring confidence in the city. But his administration has yet to reverse all the cuts to service from the last two years.

Tuesday’s hearing was the first appearance before the Council for Jessica Tisch in her new role as sanitation commissioner. In her testimony, she acknowledged the scope of the problem, the various manifestations of sanitation issues, the steps the administration has taken already, and promised to work with the Council on solutions. “I want to be very clear upfront that I agree with New Yorkers who feel that our city is meaningfully dirtier than it was before the pandemic, and that is not acceptable,” she said.

She promised a mix of policy solutions on issues like street trash, litter basket service, and rat mitigation, while also assuring the Council of greater enforcement on matters of illegal dumping and dog feces cleanup.

Tisch said the major factor leading to an explosion in street litter was the partial suspension of alternate side parking during the pandemic, which led to fewer street sweeps. The program is being fully restored on July 5 and will immediately lead to cleaner streets, she said.

She noted that the city has built out more than 100 miles of protected bike lanes over the last ten years “without a practical plan in place to keep those bike lanes clean.” The executive budget, she said, invests $6.7 million in capital funds in a fleet of mini-sweepers to clean those lanes. Ten units are expected to be on the streets this summer, growing to a permanent fleet of 45 units by the end of next year.

Though the executive budget increases litter basket service to 588 weekly pickups – more than double the pandemic era low when services were slashed – it still remains well below the 736 weekly pickups from pre-pandemic years. “Can I guarantee after the adopted budget that New Yorkers will never see an overflowing litter basket again? No,” Tisch said. “But we will work to ensure that these conditions are minimized and call on all New Yorkers to do their part to keep our city clean.”

The funding dedicated to those pickups could be among the sticking points in the negotiations between the Council and Adams ahead of the June 30 budget deadline. It’s not the only one.

Though the executive budget doesn’t include direct funding for rat mitigation, Tisch said the recently launched “Clean Curbs” trash containerization pilot will work significantly to tackle the issue. Adams has pledged to expand the program citywide and already enhanced the planned pilot set in motion in de Blasio’s final months after years of delay.

Tisch also pointed to a Sanitation's partnership with the Department of Small Business Services to provide grants to community-based organizations and Business Improvement Districts (BID) to make cleanliness improvements. She said the city has received 29 grant applications as of last month and will release a second round of applications this summer.

For issues like dog feces, illegal dumping, and derelict vehicles left on streets, Tisch mostly promised that the city will undertake greater enforcement. She noted, for instance, that in 2020 and 2021, not a single summons was given out to people for failing to pick up after their dogs. “I want to be clear that I do not believe in enforcement for enforcement's sake and there are many problems that you can't and shouldn't enforce your way out of,” she said. “That can be dangerous. But I do believe that enforcement must be a tool in our arsenal to deal with that very small percentage of New Yorkers and New York City businesses who choose not to do the simple right thing.”

Among the main issues raised by several Council members has been the city’s slow progress on reducing trash-related emissions, which would be achieved by eliminating waste, by implementing new commercial waste zones (approved in 2019) to reduce garbage truck traffic in the city, and more.

To achieve zero waste goals, which were set by the de Blasio administration years ago but far from achieved, Council members say the organics collection program has been an inadequate step and several members recently introduced legislation that would accelerate the city’s progress, in part by extending composting citywide. They’ve also pointed to trash as an environmental justice issue, since many of the city’s high-polluting waste transfer stations are located in low-income communities of color. That issue is slowly being managed under the city’s waste equity law, which limits the amount of waste that can be sent to those communities.

Tisch insisted those matters were priorities for the Adams administration as well. “Our work around sustainability could not be more urgent, and I am committed to elevating environmental justice as a core principle in all aspects of our work,” she said. The executive budget, she said, includes $29.1 million in new funding for long-term zero waste and sustainable waste management initiatives. The $17.9 million for funding organics collection programs will also be used to expand the city’s school composting program to all New York City public schools over the next two school years and to add 100 new smart bins near public schools for community members to drop off their food waste.

“I am taking a comprehensive look at our composting programs, past and present, to figure out what works and what doesn't,” Tisch said. “This administration is committed to making strides on organics but we cannot throw good money after bad.”

Council Member Brannan did praise the administration for restoring many of the cuts made to the sanitation department, but nonetheless expressed disappointment. “[W]e're happy with a lot of this stuff but it's not even close to the full loaf that we're looking for,” he told Tisch.

She insisted, though, that the budget made strategic investments to lay the groundwork for significant progress on multiple fronts. “I understand that the administration didn't fund everything. I think we made investments in a lot of the right places,” she said, noting that she expected more funding to be negotiated as the budget process proceeds.

Council members at the hearing expressed many of the same concerns, while others had more parochial questions about sanitation programs in their own districts.

Tisch said that was likely a data-driven decision. “The truth of the matter is when our curbside program for electronics was operating at its peak, which was in 2020, it collected under 1,000 tons. So it's very, very small numbers, not as cost-effective as other programs that we have in place,” she said.

Council Member Nurse asked Tisch about the potential costs of a citywide curbside organics collection program. Currently, the program is only being carried out in seven community districts. “At its height, budgeted, the organics program cost $30 million…and that was 24 districts,” Tisch said.

That, however, does not include potential overtime costs, she noted. “One of the things I was surprised to see was that there isn't a breakout in this department of what the overtime is used for…I have not yet seen a true overtime cost associated with just the organics program,” she said.

Nurse also asked how the city would decide on where to roll out smart bins for composting and about expanding the containerization program. “Are you all going to be prioritizing schools in environmental justice communities first, or are you going to be building out with different types of criteria?” Nurse asked.

Tisch said those decisions have yet to be made. “I agree with you, equity needs to inform all of our decisions in this department, but in particular the ones around smart bins and access to organics education,” she added.

Council Member David Carr, a Staten Island Republican, pressed Tisch on increasing litter basket pickups in his district and borough, which were a casualty of pandemic cuts. Tisch promised she would look into the possibility if the department receives additional funding.

Council Member Ari Kagan, a Brooklyn Democrat, called for harsher enforcement measures from the department. “Enforcement is a tool that we can and will use,” Tisch promised.

Council Member Erik Bottcher, a Manhattan Democrat who is among those Council members who have made sanitation issues a major early focus of this term, questioned why the mayor’s executive budget did not include funding for rat mitigation programs, as the Council had requested.