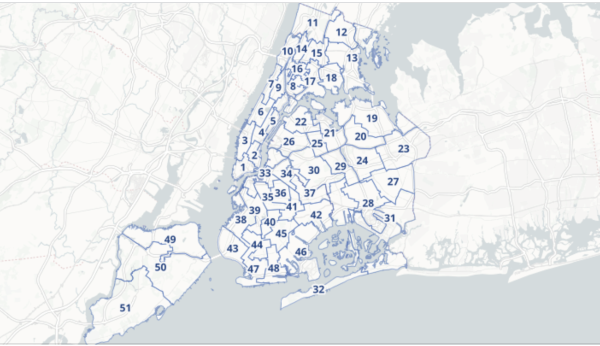 As New York wades through a chaotic congressional and state redistricting cycle, a new law could significantly alter the process for redrawing New York City's 51 City Council districts, which began earlier this month.

The city's Districting Commission must contend with population increases in almost every City Council district and an overall influx of roughly 630,000 residents citywide since the last post-Census redistricting cycle ten years ago. This year, commissioners also have to adhere to a new state law limiting the amount each district's population can deviate from one another.

The new law cut the allowable difference in population between the biggest and smallest districts by half, from 10% to 5% of the average district size. Experts say losing that population leeway could make it harder to meet other legally-mandated criteria, like maintaining the voting power of racial minority groups and "communities of interest."

"I don't know if it makes it impossible for them to balance these criteria," said Steven Romalewski, director of the CUNY Mapping Service. "But it definitely makes it more challenging because it's a tighter band and that means more lines will definitely have to change."

The first set of draft maps from the New York City Districting Commission is due June 7. The Commission, which is appointed by the Mayor and City Council and empowered to draw the final Council district maps, is holding a preliminary hearing on Thursday, May 26. Another two rounds of hearings and proposed maps will take place in the second half of 2022, with final maps to be presented to the City Council in December. City lawmakers may object to the commission's final maps but cannot stop a second revision from going into effect.

The new districts will be used starting next year in the primary and general elections for another two-year City Council term. Any special elections through November 2023 will use the current maps.

Local districts don't have the same constraints as congressional maps, which must have almost the exact same populations. Because local districts represent smaller populations, the law has allowed a level of deviation to make it easier to maintain parts of district character.

But in October, Governor Kathy Hochul signed a new state law requiring the largest and smallest county and local districts to have a difference in population no greater than 5% of the mean district size. New York City’s Law Department has determined that provision applies to the city, superseding the 10% maximum deviation allowed under the City Charter.

When she signed the law, Hochul said it was intended to extend districting criteria set forth in the U.S. and New York State constitutions and the New York City Charter to county and local governments. The law also prohibits maps from diluting the vote of racial and language minorities or favoring a particular party or candidate, among other requirements.

"As bad actors across the country work to undermine public faith in our electoral institutions, the importance of clear and uniform rules to govern political representation has never been more critical," Hochul said in a statement in October. "This law will ensure the entirety of our state is governed by rules that are derived directly from the federal and state constitutions and ensure the right to equal participation in our political process."

That deviation allowance has been abused to pack or depopulate districts. During the last redistricting cycle, State Senate Republicans used it to overpopulate Democrat-heavy Senate districts in New York City as part of horse-trading with then-Governor Andrew Cuomo and the Democrat-controlled Assembly.

New York City has seen population growth over the last decade, expanding from 8.2 million in 2010 to 8.8 million in 2020, according to U.S. Census data. In particular, the city's Hispanic- and Asian-identifying communities have grown by 154,000 and 345,000 residents, respectively. The Black and white populations have shrunk by 84,000 and 3,000, respectively.

With every border on the drawing board, there are a lot of possibilities in what the commission can do. It gives mapmakers enough wiggle room to alternately add or subtract roughly 4,325 voters from each district or, in the most extreme scenario, add or subtract about 8,480 residents from a single district and distribute that change across the remaining 50 districts.

"The Districting Commission will continue to review all relevant legal mandates that apply to New York City’s redistricting process for the City Council," said Ali Rasoulinejad, the commission's chief of staff, in an email to Gotham Gazette.

Impact on Council District Maps
According to a CUNY Mapping service analysis, 17 Council Districts currently have populations exceeding the 5% deviation. Only two districts are big enough to exceed the previous 10% threshold.

Council District 10 at the northern tip of Manhattan, is one of two districts in the city that lost residents (along with District 7 directly to the south) and now has a population deviation above 5% (though still below 10%). Its borders will need to expand to make up for the lost population.

"Does it expand south, does it expand into the Bronx, and by how much," Romalewski wondered about District 10. "That also could impact the demographics of the district."

According to Romalewski's analysis, most districts saw population growth in the last decade with some increasing by over 15% between 2010 and 2020. In that category are Council District 17 in the South Bronx, District 3 on the west side of Manhattan, and the contiguous group of districts comprising gentrifying neighborhoods along the East River waterfront in Queens and Brooklyn, home to a great deal of housing development in the last decade, and into central Brooklyn – among others. Council District 3 and District 33, on the Brooklyn waterfront, now have populations that would even exceed the 10% threshold.

How the map-drawing will unfold is anybody's guess but political interest groups are already looking at how the new population deviation limit will impact their representation.

The new State Senate maps created by a court-appointed special master last week added two new districts wholly or partially within New York City and increased the number of majority-non-white districts from 20 out of 26 to 23 out of 28, according to Romalewski.

With roughly 29% of residents and 15 city lawmakers, Latino representation in the City Council is currently in proportion to the overall Latino population. LatinoJusticePRLDEF, a legal advocacy group for Latino New Yorkers, wants to see the new Council district lines account for the influx of Latino residents and their movement across district lines.

The group has identified nine majority-Latino Council districts and four that are 30-40% Latino. "Those are districts that we're going to want to maintain this cycle," said Cesar Ruiz, a legal fellow at LatinoJustice.

"This imposition is going to limit the way we can draw districts," said Ruiz, whose team is currently seeking community input to inform its own proposed maps, which it plans to present to the city Districting Committee. "We know communities of interest can be as big as a block or housing development or as large as a county or township. With [5% population deviation] it is going to make it more difficult to incorporate larger communities of interest."

Communities of interest are residents who have shared public policy goals, which are often identified along shared ethnic, linguistic, or religious lines, but can also apply to the constituents of a community center, for instance.

That is especially true in the Bronx, which, along with Brooklyn, saw the largest increase in Latino residents – an uptick of 8% each. The group is also considering how the city's new noncitizen voting, which allows hundreds of thousands of legal permanent residents (mostly green-card holders) to vote in municipal elections, will impact the political map.

LatinoJustice is part of the Unity Map Coalition, which in 2010 and 2020 developed proposed maps intended to meet the legal requisites while preserving the voting power of racial and linguistic minority groups. Ruiz said the coalition is planning to replicate its Unity Map strategy at the city level.

Applying the New State Law
Marc Wurzel, a Republican-appointee on the city's Districting Commission, is concerned the shift to a lower population deviation threshold will hamper the commission's work. "Where we try to meet our obligations to keep communities intact and keep districts compact, and also try to account for communities of interest, I think that process becomes more difficult when you have less room to work with," he told Gotham Gazette in an interview.

"I've gone through it twice with ten percent and I think the process worked pretty well. This is going to be a new experience," he said.

Wurzel raised similar concerns at the commission's first public meeting on May 11, where he also argued the state law may not apply to New York City because the city's process isn't driven by a local lawmaking process.

The Law Department disagreed with that interpretation. "For the city to claim that that [provision] also doesn't apply to the city when [it] is explicitly carved out for all local governments would be, we think, a very risky act," Spencer Fisher, a Law Department attorney, said at the meeting.

Wurzel is the general counsel at the Grand Central Partnership, which manages the Grand Central Business Improvement District. That BID falls within City Council District 4, which according to Romalewski's maps currently has a population deviation above the 5% threshold. That means its borders will have to shrink, potentially carving the BID into multiple Council Districts.

A legal expert involved in drafting the state legislation told Gotham Gazette it should apply to New York City. "That's something that the commission is going to have to deal with as are all county and local governments across the state," they said.