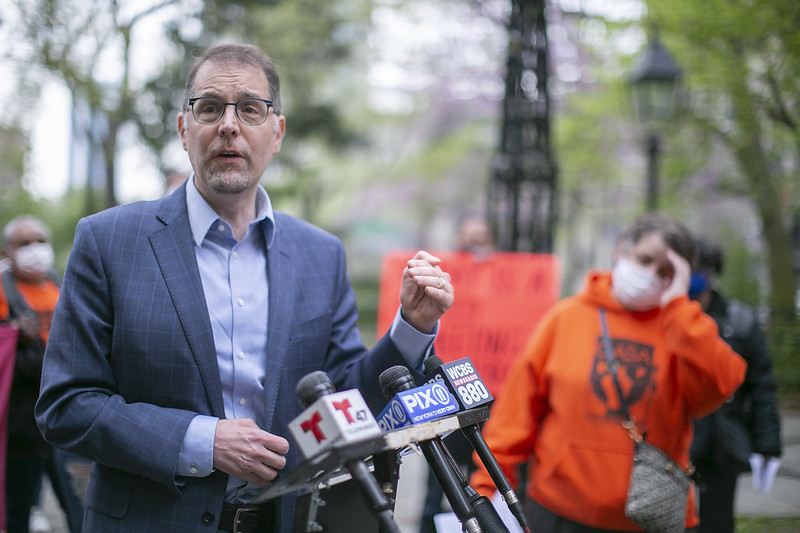 Levine, who previously served on the City Council and made a name for himself during the pandemic as chair of the Council’s health committee, is working with Council Member Keith Powers, a fellow Manhattan Democrat, and has requested the Council’s legislative division to draft the bill (borough presidents can introduce and request legislation but they cannot vote on them).

Levine first announced his proposal at a recent CityLaw breakfast hosted by New York Law School. “[We] are beginning a major push that I think will be critical to protecting us long-term from this virus, from future waves, and similar transmissible diseases, which is we want to have high standards on air quality in buildings in New York City, something that we simply don't have now, that we've never really adequately addressed,” he said. “We're preparing legislation that we hope will make this analogous to fire safety provisions but of course focused on things like air flow and filtration in public buildings, commercial buildings, even residential buildings.”

As Levine noted, the coronavirus spreads most aggressively through the air in enclosed indoor spaces with poor ventilation. It prompted broad discussions about the adaptations that office buildings, public venues, and city schools, for example, would need to make to ensure that people safely return without the risk of covid transmission. As some covid restrictions have been rescinded and mask and vaccine mandates rolled back by the Adams administration, those discussions have taken on added urgency, particularly as the number of cases in New York has risen dramatically and pushed the city into “high-risk” territory.

“As we've come out of other public health crises we have reenvisioned our buildings, and I hope that we come out of this pandemic rethinking indoor air quality,” Levine said in a phone interview with Gotham Gazette. “We've just spent decades creating buildings that are hermetically sealed and that really was the dominant architectural style of much of the last generation. And that turns out to be really unhelpful when a pandemic hits.”

Levine’s bill is still being crafted but he hopes to apply the standards both to new construction and also existing buildings. “It's the kind of long-term work that we should be doing now because we could have future, serious waves of covid and because there could be other airborne pathogens which we want to protect against,” he said.

At the federal level, the Biden administration prioritized improved indoor air quality as part of its National COVID-19 Preparedness Plan released in March, and the Environmental Protection Agency issued a “Clean Air in Buildings Challenge” with guidance for anyone who manages a building to create plans for cleaner indoor air.

“The most common way COVID-19 is transmitted from one person to another is through tiny airborne particles of the virus hanging in indoor air for minutes or hours after an infected person has been there,” wrote Dr. Alondra Nelson, head of the White House Office of Science and Technology Policy and Deputy Assistant to the President, in a March blog post. “While there are various strategies for avoiding breathing that air – from remote work to masking – we can and should talk more about how to make indoor environments safer by filtering or cleaning air.”

She noted that the $1.9 trillion American Rescue Plan includes $122 billion for schools and $350 billion for state, local, and tribal governments that could be used for air quality upgrades. “Scientific and public health evidence supports practical, actionable solutions for cleaner indoor air. It is time for a national conversation on how better indoor air quality can help us all live healthier lives,” she wrote.

There are different sets of regulations on indoor air quality applicable in the city depending on the classification of buildings. Office buildings, for instance, have to abide by guidance set by the federal Occupational Safety and Health Administration (OSHA) while residential buildings are guided by local law and building codes. The EPA’s guidance on indoor air quality is just that, advice rather than a requirement, though the Clean Air Act does set regulations to protect against exposure to certain chemicals and materials.

“I think those standards need to be reconsidered in light of the two-and-a-half years we’ve been through,” Levine said.

“Mayor Adams supports strong air quality standards to protect the health and wellbeing of all New Yorkers. We will review the legislation when it is introduced,” said a spokesperson for Mayor Eric Adams, in a statement.

Unlike other protective measures taken during the pandemic, Levine said building air quality improvements aren't likely to run into widespread political opposition though it may require higher costs for real estate developers.

“Retrofitting is always more challenging, but I think owners want to be able to sell their buildings as safe as possible in what could be an era of contagious airborne diseases,” he said. “As we're trying to get people to come back to the workplace and want people to feel safe in public buildings and their homes, I think this will be good for business.”

A spokesperson for the Real Estate Board of New York did not say whether the group might support the proposal. “Throughout the pandemic, REBNY members were quick to adapt their properties to improve air quality, ensuring greater filtration and safety measures were in place. We look forward to reviewing any proposed legislation,” said Christopher Santarelli, REBNY’s director of media relations.