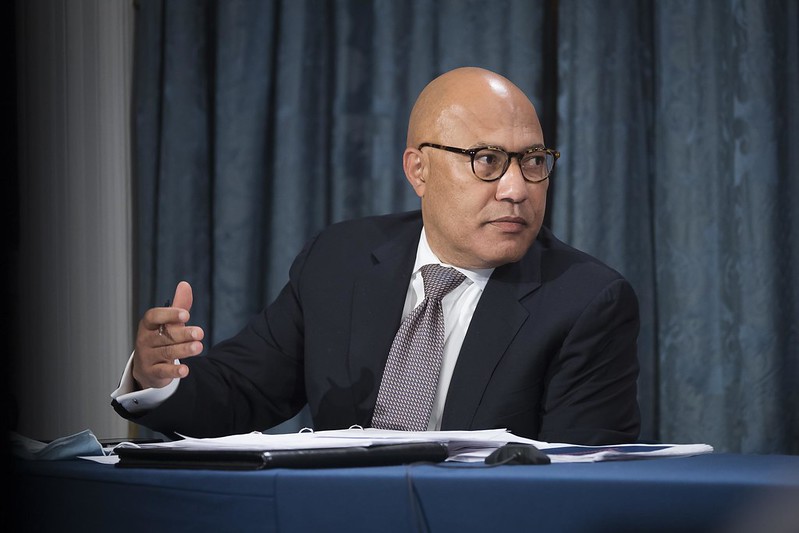 The New York City Council held its final hearing Tuesday on Mayor Eric Adams’ $99.7 billion executive budget proposal for the 2023 fiscal year, pressing the administration to fund several outstanding requests ahead of the June 30 deadline for the next budget.

In her opening remarks, Council Speaker Adrienne Adams, a Queens Democrat, commended the Adams administration for funding several Council requests made in the official response to the mayor’s preliminary budget including additional money for mental health emergency response, increasing headcount at the Parks Department, and restoring some cuts to the Department of Sanitation. “However, the Council believes there is still a ways to go before our work is done,” she said.

Since the mayor’s initial budget proposal in February, the city’s economy has picked up momentum and the Mayor’s Office of Management and Budget (OMB) issued new revenue forecasts that estimate an additional $1.6 billion flowing into city coffers in the current fiscal year.

Speaker Adams pointed to the Council’s own revenue predictions, which are much more generous than OMB’s, and estimated that the city could have more than $3 billion in additional revenue in the current year and $1.9 billion more in the next fiscal year.

“Now we know we need to roll significant amounts of money into next year to balance the budget and that the city faces many risks in the future,” she said. “But we also know that we presently have significant pressing needs. We can provide ourselves with a responsible cushion accounting for these risks while still addressing the city's critical needs.”

The speaker detailed a series of Council funding priorities aimed at tackling the inequities exposed and exacerbated by the pandemic. “This is not only the right thing to do, but also the sound fiscal thing to do. You don't keep repairing a house while leaving structural issues that caused the damage unaddressed,” she said.

OMB Director Jacques Jiha continued to emphasize the city’s prudent fiscal management, touting the mayor’s Program to Eliminate the Gap (PEG), which cut and saved about $2.4 billion over fiscal years 2022 and 2023 largely through personnel via attrition. The budget also reduces the budgeted municipal headcount in fiscal year 2023 by 7,000 workers without layoffs.

Jiha pointed to several positive developments for the city including jobs growing faster than the national rate, tourism rebounding, and record Wall Street profits. But he warned that the city’s outlook is “cloudy” as he pointed to uncertainties including market volatility, higher interest rates, the effects of the Russian invasion of Ukraine, and a high commercial vacancy rate as private businesses have been slow to get workers back to offices.

A major financial uncertainty that the city is anticipating is the expiration of municipal labor contracts this year, which the city has yet to fully budget for. Jiha said the administration has begun to prepare for that by adding $1.7 billion across fiscal years 2022 and 2023 to the city’s labor reserve, which would fund a 0.5% percent annual wage increase for the first two years. The Citizens Budget Commission, a nonprofit fiscal watchdog, has said that those reserves may be “woefully insufficient” and that a 3% raises over three years would increase spending by $3.8 billion annually by fiscal year 2026.

With the city enjoying an abundance of cash, Council members questioned Jiha about why their priorities weren’t funded. Those issues will be front and center over the next several weeks as the two sides of City Hall move to closed-door negotiations and many Council members and advocates press their asks publicly.

Speaker Adams pushed Jiha on increasing transparency in the budget, noting that the Council’s request to add more units of appropriation went largely unheeded. “Without transparency, none of us can be accountable for our decisions. But the current method for budgeting does not allow for this accountability,” she said.

Jiha said the challenge is balancing transparency with the necessary flexibility to adjust spending as required and struggled to provide the speaker with any specifics despite her multiple attempts. “We will work with you to see what additional [units of appropriation] would be beneficial as we move toward adoption,” he said.

Adams also pointed to several policy items on the Council’s agenda including increased funding for senior health care, tackling food insecurity, two first-of-their-kind trauma recovery centers the Council wants to create, reallocating funding to convert hotels into housing for homeless families, and more. In each area, Jiha promised to collaborate on the Council’s demands while pointing to investments the city has already made.

Other Council members touched on various priorities as they proceeded to question Jiha.

Council Member Justin Brannan, a Brooklyn Democrat and the Council’s finance committee chair, pushed for more funding for the Equal Employment Practices Commission to increase its headcount. Jiha said the administration was first seeking to fill vacancies at the agency before they would revisit the question of more funding.

Brannan also pushed for funding for a $150 property tax rebate, which Jiha said the administration supports in principle but would need state authorization to provide.

Council Member Gale Brewer, a Manhattan Democrat, urged the administration to expand the city’s composting program and to embrace a mandatory composting bill that was recently introduced before the Council.

“We're just looking for the best method, the most efficient means of doing it,” Jiha said, noting that the city’s incipient curbside composting program wasn’t picking up high enough volumes to justify it.

Council Member Lincoln Restler, a Brooklyn Democrat and co-chair of the Council’s Progressive Caucus, took exception with the administration for funding a 500-worker increase in the headcount at the Department of Correction at a time when the agency has failed to control the crisis at Rikers Island, which is already slated for closure. “How is this fiscally responsible?” he asked.

Jiha said the additional staff is necessary as the city moves to end solitary confinement in jails and to provide adequate supervision of detainees.

But Restler noted that hundreds of corrections officers have regularly called out sick from work, causing staffing shortages and hampering jail operations. “We need to hold these folks accountable. The strike via sick-out is totally unacceptable,” he said.

Council Member Charles Barron, a Brooklyn Democrat, was, as he often is, perhaps the most critical of all the members, condemning the administration for a budget that he said does not invest in the most vulnerable Black and brown communities. “We have to stop this conservative Republican austerity budget where the rich are getting richer as you see on Wall Street and the poor are getting poorer,” he said.

Comptroller Brad Lander, in his testimony on Tuesday, also shared projections that the city is doing better than expected and will see $3.3 billion in additional revenue above OMB’s predictions for the current fiscal year. “The city’s near-term fiscal position is bright, but clouds are on the horizon,” he warned, echoing the risks that Jiha outlined.

Lander also noted that the city faces a $1.3 billion fiscal cliff by FY2026 because of several expenditures that have consistently been underfunded such as overtime costs, homeless shelter spending, and “Carter case” spending for students with special needs. The city has also used one-time federal stimulus funds for recurring programs such as the expansion of 3-K, he noted.

Lander called on the administration to bolster reserves, reiterating a proposal he released on Monday to require a $2.5 billion deposit in the city’s Rainy Day Fund each year when revenues allow – $1.8 billion more than what the administration has added for the next fiscal year. That would give the city a reserve balance equal to 10% of annual spending, “enough to provide cushion for the first two years of a recession,” Lander said. “We believe this is not only prudent but also reasonable and achievable.”

The Independent Budget Office, a nonpartisan city agency, shared similar optimism about the city’s recovery and the potential roadblocks to it. George Sweeting, IBO’s acting director, said its revenue forecasts were higher than OMB’s, while acknowledging the same risks including high inflation, federal funds that will run out, and expiring labor contracts.

“Our economic forecast relies on the assumption that the Federal Reserve will succeed in its efforts to tame inflation by tightening monetary policy without causing a recession,” Sweeting said. “However, this is far from certain and presents the greatest risk to IBO’s economic forecast of continued modest growth over the entire forecast period.”