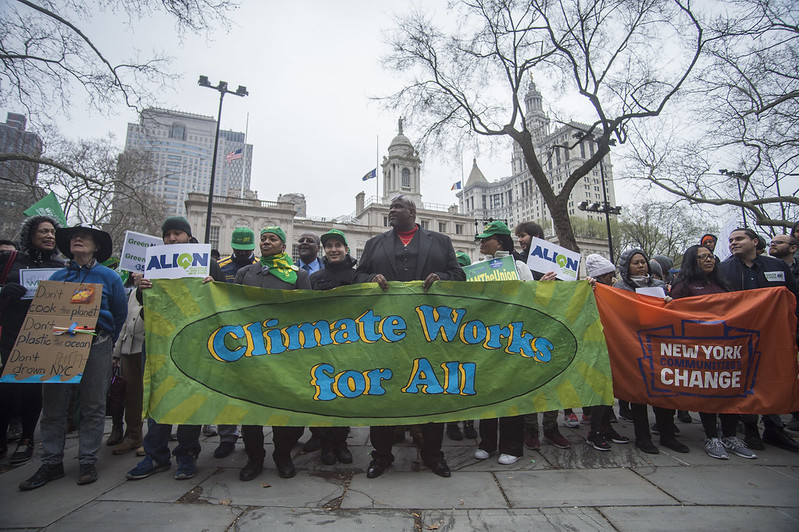 In 2024, New York City will begin capping emissions from the city’s largest buildings – which are its worst polluters – under Local Law 97, which was approved as part of the city’s Climate Mobilization Act of 2019. The law requires buildings to be retrofitted with energy-efficient and sustainable systems – upgrading heating and cooling systems, possibly installing solar energy, for instance – to significantly reduce their carbon footprint to meet those emissions caps, or otherwise face hefty fines.

But the city has just over six months to issue rules and regulations for property owners and managers to follow, and activists and officials say that the recently approved city budget falls short of what the city’s Department of Buildings will need to accomplish that task.

The first set of caps, for about 20% of the city’s biggest buildings, will be effective starting in 2024, and stronger limits will be instituted in 2030, affecting 75% of those buildings. Besides cutting pollution, the law will directly lead to thousands of jobs from construction to building design and renovation — part of why it has been billed by some as a key part of the city’s version of a “Green New Deal.”

Elected officials and activists spent months pressing Mayor Eric Adams, a first-year Democrat, to wholly commit to implementing and enforcing the law, in particular by providing funding for additional staff at the Department of Buildings (DOB), which will play a key role. The law created a new Office of Building Energy and Emissions Performance at DOB, tasked with calculating emissions formulas and setting emissions limits, among other roles, much of which will require formal rulemaking through a public review and input process that has not yet begun. (The city also has a separate program called Property Assessed Clean Energy which helps property owners finance energy upgrades and renewable energy projects).

Officials and activists argued that the new office would be unable to do its job effectively unless its current complement of six full-time staff was boosted by another 10-15 workers.

Asked about that demand on Earth Day, April 22, Adams said, “We're still in the budgetary talks, still in conversation. So many people will say, ‘Well, you know what, Eric is not going to be aggressive about that.’ Wrong. I'm going to be extremely aggressive about it. I did not start as mayor talking about improving our environment. This is something I'm committed to, I'm going to continue to do so.”

The final $101 billion budget for the 2023 fiscal year, which begins July 1, agreed upon by Adams and the City Council includes $400,000 in additional funding for five more staff members at the Office of Building Energy and Emissions Performance (BEEP). According to the mayor’s office, that allocation was based on DOB’s assessment of its staffing needs. The mayor’s office also said the budget added $2 million to support the BEEP office’s work, which includes monitoring building energy use and emissions, creating an online portal for the submission of building assessments, auditing assessments and inspecting buildings, among other responsibilities.

The mayor and his administration have raised several concerns about the building emissions law, especially its penalty structure, which they say could be overly punitive even as building owners attempt to comply with it. He has said his goal is to see compliance, not fines.

But, to activists, the mayor has been parroting allies in the real estate industry, which has similarly argued against the enforcement mechanisms of the law and questioned the timeline of the mandates. A group of property owners and managers have already filed a lawsuit against the city over the law, calling it “ill conceived and unconstitutional” and its penalties “draconian,” according to a City Limits report.

“What we're continuing to see is the administration double-talking about the implementation and enforcement of the law, which is really disappointing and echoes the real estate industry’s talking points,” said Pete Sikora, climate and inequality campaigns director for New York Communities for Change, a nonprofit advocacy group that pushed hard for the passage of Local Law 97.

Sikora said the addition of five staff to BEEP was a “minimal” step towards implementing the law.

“The mayor needs to disabuse himself of the notion that he can satisfy the real estate lobby and produce jobs and cut pollution,” he said. “You can't square that circle. You're either on one side or on the other side, and it is time to pick the right side for working people in the city.”

At an April 13 hearing on Local Law 97, the city’s Chief Climate Officer and Commissioner of the Department of Environmental Protection Rohit Aggarwala told the City Council, “We have no intention of giving anyone a free pass or letting anyone off the hook. But we also see no benefit to the environment in punishing someone who is actually doing everything possible.”

Adams has also insisted that the city needs to make it easier for building owners to retrofit systems and make energy upgrades. “Fines don’t serve the goal of GHG reductions, but retrofits and upgrades create jobs,” a mayoral spokesperson told Gotham Gazette in March. “That is why [the mayor] has supported City subsidies to assist property owners in need with the cost of retrofitting and called for significant investment in retrofitting the City’s own buildings as part of a broader strategy to ensure NYC is a national leader in reducing carbon emissions and in creating a green economy.”

Comptroller Brad Lander, who co-sponsored Local Law 97 when he was a City Council member, has also been calling on the administration to continue increasing funding for its implementation. “I am encouraged to see some additional funding in place for the implementation of LL97 at this critical time, but we have a long road ahead towards ensuring effective implementation and compliance,” he said in a statement to Gotham Gazette. “As we move closer to the first compliance period in 2024, it is critical that the city continue to expand the resources to implement this landmark law and enhance programs that can support building owners in their compliance.”