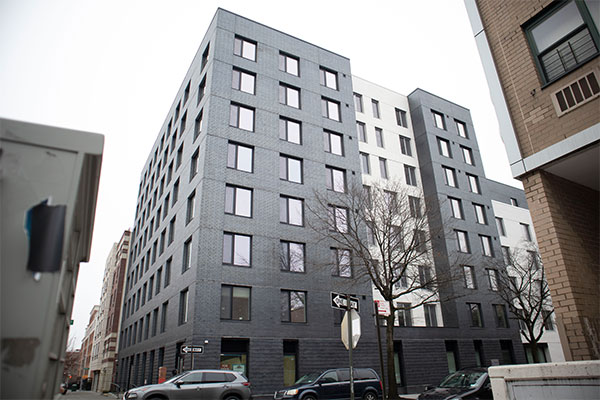 A new supportive housing development with 52 units designated for recently incarcerated individuals is now open in Brownsville, Brooklyn. This past week, the Osborne Association, a nonprofit focused on helping justice-involved people, celebrated the opening of their first housing initiative of its kind, part of their broader $179 million Marcus Garvey Extension Project.

The effort to provide stable, permanent housing for those who have recently been incarcerated takes aim at an oft-ignored New York crisis: the prison-to-shelter pipeline that has seen 25,000 people go straight from state prisons to New York City homeless shelters over the past 8 years.

As recently reported by Gotham Gazette, two out of five people returning from prison last year were released to shelters and other placements for homeless adults, according to the New York State Department of Corrections and Community Supervision (DOCCS). A lack of stable housing has been found to correlate with recidivism, while supportive housing can help reduce it.

The new Osborne subsidized housing development, built in partnership with L+M Development, a real estate firm, includes 174 units overall — beyond the 52 units for recently-incarcerated individuals, are 122 more affordable housing units. To qualify for the supportive housing units, applicants must be over 50 years old and make under $30,000 in financial income.

The project is included among three buildings, with 348 apartments total, in Brownsville. A second building contains 96 affordable homes, including 52 units of supportive housing dedicated to families coming out of shelters, with services and programs provided by WIN, a nonprofit that serves homeless women and children. The third building includes another 78 affordable housing units and over 5,000 feet of community facility space.

“For the first time in 30 years, I can say that I have a home,” said Jose Vega, 51, who spoke at the opening of the supportive housing program, and will be moving into one of the apartments by the end of the month.

Vega, who is a wheelchair bound, level T-3 paraplegic, spent nearly 25 years incarcerated, and was released from Five Points Correctional Facility in June 2018. Upon his release, he wanted to avoid the shelter system, after hearing horror stories about its inaccessibility and the mistreatment of people with disabilities who live in shelters. And though he was able to stay out of the city’s shelter system, Vega was also turned away from multiple other housing assistance programs following his release.

Ultimately, Vega’s parents took him into their one-bedroom senior citizen apartment, which was not wheelchair or ADA accessible. His parents also had to hide the fact that he was staying with them to avoid eviction or punishment from their landlord, something that they lived in “constant fear” of, he said.

“They willingly gave up their tranquility and privacy for me,” Vega said. On nights where he wasn’t able to get past the security at his parents’ building, he stayed with friends, and slept on their couch.

Right now, the city is facing what the Osborne Association referred to in the opening’s press release as “twin crises of an aging prison population.” As the population of incarcerated individuals drops, the percentage of people older than 50 who are incarcerated continues to grow. At the same time, the challenge to find affordable and supportive housing after release is increasing, contributing to an already burdened shelter system and the breadth of other challenges faced by older people who have been released.

“Older people face unique challenges coming home that include a digital world that may feel completely foreign to them and immediate existential needs like health care, gaining proper identification, reconnecting with family, employment, and resources to address the trauma of long-term incarceration,” reads a press release about the Marcus Garvey housing opening.

A report from New York State Comptroller Thomas P. DiNapoli’s office showed that the state’s population of older incarcerated individuals doubled during a 13-year period, even as the overall population of incarcerated people decreased. In March 2021, 24.3% of the state’s 31,262 prison inmates were 50 and older. Whereas in March 2008, just 12% of the then-prison population of 62,597 were part of this same demographic.

For four more years, Vega continued to apply for other re-entry programs, and says he filled out hundreds of housing applications. It wasn’t until a year and a half ago that Vega was connected with Osborne through the city’s Health Justice Network. Now, after living at his parents’ apartment since his release, Vega received his keys for his new ADA accessible apartment on Monday, June 27, something he says he would have never expected to happen.

“As happy as I am today, my journey does not end until ADA housing is available for all disabled and wheelchair-bound returning citizens,” Vega said. “Toward this goal, I am honored to be a part of Osborne to help in any possible way I can. They reached out to me and helped me when no other organization would.”

Archana Jayaram, the President and CEO of the Osborne Association, called the project a “critical part” of the nonprofit’s work, and said that they hope to continue to step into this area of housing.

As a commitment to helping residents at Marcus Garvey re-enter society after incarceration, other resources at the facility include technology courses from John Jay College of Criminal Justice, wellness services and clinical groups, and providing residents with everyday items like laundry and dish detergent to alleviate financial burdens.

The facility also has in-building laundry facilities, a bike room, a gym, parking space for 36 cars, and a community room with a computer lab. All common spaces have access to Wi-Fi.

Later this year, the Osborne Association expects to open a transitional housing facility in the Bronx, described as a “re-entry community center” with 135 beds for individuals recently released from incarceration.

State Senator Roxanne Persaud, chair of the Senate’s Committee on Social Services, also attended the opening in her senatorial district, and spoke about the importance of providing housing and easier transitions for formerly incarcerated individuals upon their release.

“It's our obligation to ensure that when you are returning home, you're not just given a ticket to a bus and a couple of dollars and no place to go, and that you're not just told, ‘find a shelter,’” Persaud said. “The shelter system was not built for that. The shelter system on its best day has many challenges. Think about it on its worst day. As a chair of social services in New York State Senate, that is my commitment: to ensure that we work with the systems to change the issues and the obstacles that we see on a daily basis.”

Persaud’s comments do to some extent belie the limited amount being done at the state level to stop the prison-to-shelter pipeline.

At the event, Christina Green, a program director for Osborne, also spoke.

Green started working as a community health worker with the Health Justice Network after she was released from prison in 2019, and following her participation in a workforce development program with the Osborne Association. While she was incarcerated, Green went back to school, and also worked as a mentor for young incarcerated women.

After working with the Health Justice Network, she applied for a position as a supervisor with Osborne, and has since worked her way up to her role as a director.

When Green met Vega on a Zoom call, she said his story stuck with her, and once housing applications for the Marcus Garvey units were open, she urged him to apply right away. She said that most applicants who have been approved spent about 20-40 years incarcerated.

“I think that people are concerned about having apartments like this in their neighborhood, but nobody wants to be judged by the worst mistake that they've done in their lives,” Green said in an interview with Gotham Gazette. “If you got caught doing the worst thing you ever did in your entire life, that's not something that you would be proud of. You'd want another opportunity, right? There's a lot of people here that have done a lot of good. They did make a mistake, including myself, and we're trying to move on from that, and I'm trying to help people coming in behind me.”