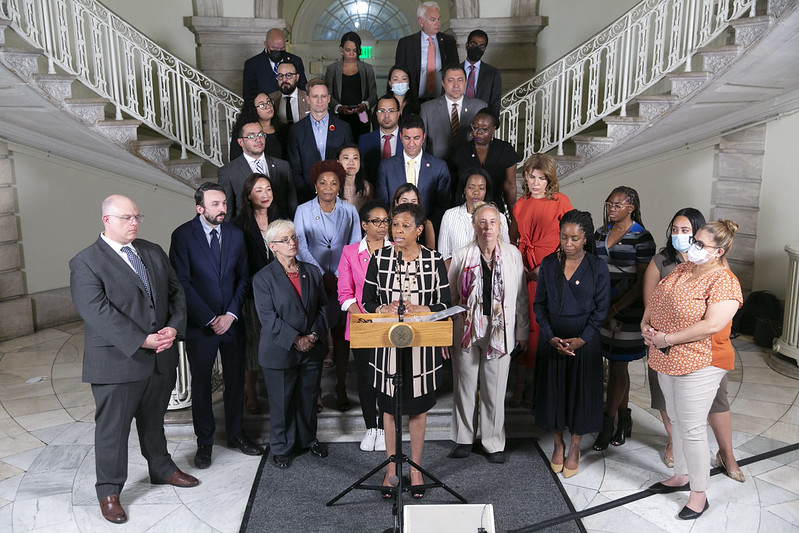 Unlike the fight over new state legislative and congressional district maps, which focused on partisan lines earlier this year, the effort to redraw New York City's 51 City Council districts has become a battle defined by incumbency and ethnicity.

Last Friday, the New York City Districting Commission released a preliminary set of draft lines that could form the basis of the city's political map for the next decade. The commission is tasked with redrawing the City Council districts to reflect population shifts following the 2020 Census while adhering to a number of city, state, and federal mandates like the protections of the federal Voting Rights Act.

The map released Friday is the first step in a multistage process that will include another round of public hearings and feedback from the current City Council, before a final map is approved by the commission. While the Council can ask for revisions, it's the commission – whose 15 members are appointed by the mayor (7 appointees), the Council's Democratic majority (5), and its small but growing Republican minority (3) – that will determine the final map, which is set to go into effect in February 2023 for elections beginning later next year.

All 51 Council seats will be on the ballot in elections set for that same year, with June primaries and a fall general election, though special elections can occur any time based on a vacancy.

The new preliminary map came after a round of public hearings across the city and in many areas reflected pleas to move district lines. It also caused a stir in several corners of the city for drawing boundaries that, if left unchanged, would pit incumbents against one another, divide long-standing voting blocs, or both.

“The NYC Districting Commission has failed immigrant New Yorkers in its draft City Council district maps. By splitting several immigrant communities and not maintaining all of the City Council’s plurality minority districts, the NYC District Commission did not meet its mandate of keeping communities of interest together," said Murad Awawdeh, executive director of the New York Immigration Coalition, in a statement Monday.

He pointed to the cracking of a Latino area in Red Hook and Sunset Park in southern Brooklyn, which has also raised the hackles of City Council Members Justin Brannan and Alexis Avilés, two Democrats who would face each other under the proposed lines.

"It is perplexing that the creation of an AAPI-majority seat in southern Brooklyn would lead to the dissolution and division of Red Hook, Sunset Park - in addition to Dyker Heights - and it is certainly not necessary," wrote Brannan and Avilés in a joint statement shortly after the preliminary maps were released Friday. "We look forward to seeing future proposals, because this ain't it."

Awawdeh also cited the fracture of communities of color in Woodside, Ridgewood, and Richmond Hill in Queens, and Kensington in Brooklyn.

"While some progress was made in the creation of a majority Asian district in Brooklyn, all New Yorkers deserve to have a voice in their local democracy, and these maps do little to ensure that promise is kept,” he said referring to a new potential district in that same region of southern Brooklyn that a chorus of advocacy groups had pushed for during preliminary hearings. The drawing of that district is partially what led to the jumble of Brannan’s and Avilés’ districts, though decisions made in other parts of the city also had an impact.

"All those comments have resonated with us and factored in," said Districting Commission Chair Dennis Walcott, referring to public comments received leading up to the preliminary map drop, in an interview with Gotham Gazette.

"That really helped frame, I think, a lot of the thought process that went into the drawing of the preliminary maps," he added. "And while maybe some of it got in and some didn't, it was a great healthy process for us to really go to all five boroughs to…really get perspective of the uniqueness of the different communities throughout the borough[s]."

Other City Council members have raised alarms about preliminary lines elsewhere, like Council Member Selvena Brooks-Powers, a Queens Democrat, who said the map would cut out Black enclaves and longstanding institutions if left in place.

Lines that would add Roosevelt Island and parts of the Upper East Side district currently represented by Democrat Julie Menin to a Queens district represented by Democrat Julie Won have also caused an outcry among Menin’s constituents. "Many communities of interest in the current district would be split into a different district," Menin said in a newsletter to constituents encouraging them to submit testimony. "I will be working hard in the coming days and weeks to ensure our community is able to give robust feedback to the Commission on these new lines."

A decision to keep Staten Island's three City Council districts intact and self-contained (meaning they don't cross into any other boroughs) in response to calls from some residents there meant the commission had less flexibility in other parts of the city.

"One always has to approach this process knowing there will always be individuals who are either not pleased or pleased based on the first preliminary draft and then what happens afterwards," he said. "That's just part of the normal process and the give and take. I think we have to understand and accept that."

The release has triggered a new flurry of calls for public participation, both by the commission itself, and members of the City Council and other groups who are unhappy with the preliminary map.

“We are reviewing the preliminary maps of Council Districts released today by the NYC Districting Commission," said Council Speaker Adrienne Adams, a Queens Democrat, in a statement. "It is critical for the public to provide input on these first drafts as part of the ongoing redistricting process. We strongly encourage all New Yorkers to participate, and we will continue working to ensure communities’ interests are prioritized and protected.”

Members of the public can submit feedback to the commission any time by email to This email address is being protected from spambots. You need JavaScript enabled to view it. or testify in person or virtually in one of five City Charter-mandated hearings to be held in each borough from August 15-22.

A spokesperson for Speaker Adams said the Council's central office and individual members have been informing constituents of the process through social media and in community newsletters.

Walcott said the commission staff was already analyzing testimony it has received on the new maps.

The commission has uploaded the preliminary maps to its website along with a number of interactive features that allow residents to see demographics broken down by ethnicity and voting age. It also includes the public testimony and proposed maps the commission has received and links to videos of previous hearings. (CUNY Graduate Center's Redistricting & You also allows users to compare maps and includes other useful metrics like party enrollment and recent mayoral election results.)

"All of that is with the goal of really having the public totally engaged in the process and to share their inputs and feelings around what has been submitted so far," said Walcott, a former deputy mayor and city schools chancellor under Mayor Michael Bloomberg and now the president of the Queens Library.

"We said we're going to compress the time of drawing the maps so that way we could get more public input into the process," said Walcott.

That process also included meetings between commission staff and Council member delegations in each borough, Walcott told Gotham Gazette. While he insisted the commissioners did not consider the residency of elected officials or how individual incumbents might benefit or hurt from the new lines, they valued and strongly encouraged members to participate.

"The Council delegations had the opportunity and will again have the opportunity to meet with staff around their concerns," Walcott said. "We want an inclusive process so we're not shying away from that. We really value that more than anything else."

The commission is also buying ad space in local media in multiple languages and has a five-person outreach team drumming up interest at community events, like farmers markets and civic centers.

The commission does not only consider public input; it is required to meet certain criteria under the Constitution, federal Voting Rights Act, state law, and City Charter. Each criteria reduces the leeway of the commission to address any other requirement, setting up a balancing act that commissioners get only a few tries to refine.

With 8.8 million people – up roughly 630,000 from the 2010 Census – each of the city's 51 City Council districts must have approximately 173,000 residents. State law requires the difference in population between the largest and smallest districts to be no greater than 5%. The commission cannot dilute the power of racial and language groups protected under the Voting Rights Act. The Charter requires the commission to preserve, as much as possible, neighborhood boundaries and so-called "communities of interest" – a vague term shaped largely by the input of members of the public who provide testimony. Districts must also be "compact," avoid crossing borough lines, and avoid splitting voters of the same party.

The process inherently prizes local input and the commission placed a premium on the voices of individual members when it came to lines in their boroughs. Often those conversations took place with a deliberately smaller subsection of the commission so as not to trigger the state's Open Meetings Law, which requires government entities to conduct meetings in public view, Walcott said.

"The way we did it to also be in compliance with open meeting laws is that we had virtual meetings with each other under the limit of triggering open meetings, that way we could have full discussions," Walcott told Gotham Gazette.

"We tried to do it where – not all the time but most times – where the borough representatives [on the commission] were part of that particular discussion, taking a look at both testimony and the information and knowledge they would bring about the borough itself," he said of decisions made in particular neighborhoods.

Rachael Fauss, an analyst at the good government group Reinvent Albany, said that practice could undermine the government transparency law even though it does not violate it. "The spirit and intent of the state's Open Meetings Law is to ensure that the public can understand how government makes decisions," she wrote in an email. "If government discussions and decisions are being made ahead of public meetings in private conversations, this is counter to the spirit of the law."

"It is unfortunately all too common for state and city boards or commissions to have meetings with a small group of members intentionally seeking to not trigger a quorum under the Open Meetings Law. This skirting of the law means that the public does not get to hear the discussions that lead up to decisions being made -- many of which are important and affect representation, like redistricting, or the spending of public dollars," wrote Fauss.