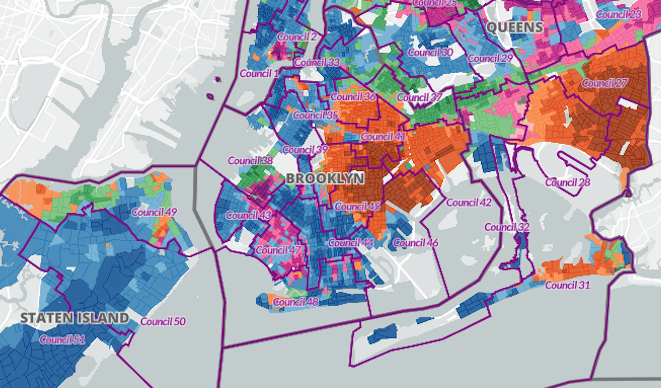 In Brooklyn, the commission proposed a new Asian American majority district that could award political power to a growing constituency — what the commission itself deemed an “Asian opportunity district” for the fastest-growing ethnic group in the city.

But some Asian American advocates say that the proposal will continue to divide their communities and rob them of equitable representation in the Council. And they are proposing a different map of Brooklyn districts and preparing to push the districting commission to change its boundaries at upcoming hearings to be held before the commission puts the next iteration of the maps to the current City Council.

In Brooklyn, Asians account for 13.6% of the borough’s population, up 110,647 residents, or a 42.5% increase from 2010. The borough neighborhoods with the highest Asian populations include, in order, Bensonhurst, Sunset Park, and Gravesend.

The Districting Commission, in its proposed maps, created new lines in South Brooklyn that have drawn consternation from some Asian and Latino advocates, immigrant advocacy groups, and the local Council Members, Justin Brannan of District 43 and Alexa Aviles of District 38.

Under the new lines, the two districts would be combined in parts to create a new District 43 with an Asian American majority, while splitting the Hispanic population of Sunset Park and Red Hook that is currently concentrated in District 38. The configuration could possibly also set the two lawmakers on a path to conflict in the upcoming 2023 elections that will use the new maps and see every Council seat on the ballot. The proposed new District 38 would include Brannan’s political base of Bay Ridge and Aviles’ political base in Sunset Park.

“It is perplexing that the creation of an AAPI-majority seat in southern Brooklyn would lead to the dissolution and division of Red Hook, Sunset Park – in addition to Dyker Heights – and it is certainly not necessary,” Brannan and Aviles said in a joint statement when the preliminary map was released, noting that the “historically Latino” District 38 would be torn apart.

“Pitting one community of interest against another and wiping out hard-fought gains that have existed for a generation is not the path forward,” they added.

Asian American advocates, on the other hand, are organizing around different proposals that could even yield two new districts with Asian American pluralities.

The population trends in South Brooklyn show that the Asian population has already grown significantly within the current confines of District 38, where Asians make up about 41% of the population, and some have argued that it should be kept intact. But they are also arguing for a unified district that encompasses Bensonhurst’s large Asian population, which is currently split across four City Council districts and would still be divided among three districts under the preliminary proposal from the districting commission.

The Districting Commission is currently soliciting public input on the map it has proposed, and will hold a series of public hearings, one in each borough, over the next few weeks. Members of the public can even present their own maps to the commission as alternative proposals to consider. The Brooklyn hearing is scheduled to take place at Medgar Evers College on August 21 from 3:30 p.m. to 7 p.m.

“We have to show them how we can achieve these goals without blowing up all of Southern Brooklyn,” said Council Member Brannan, in a phone interview. “I think we are all on the same page.”

Indeed, Brannan’s and Aviles’ interests in holding their communities together align with many Asian American advocates who say that District 38’s growing Asian American population effectively already makes it an Asian opportunity district. “You want to empower emerging immigrant communities but you don't do that by tearing down one of the main historic Latino districts in Brooklyn,” Brannan said. His current district covers Bay Ridge, Dyker Heights, Bensonhurst and Bath Beach, half of which would end up in the new proposed District 38 while the rest would largely be in the new District 47.

Though there isn’t yet a consensus on what an alternate map should look like, groups like New York Immigration Coalition are helping educate their members on the proposal and using mapping tools to submit their own ideas to the commission. “I think making a majority Asian district in South Brooklyn is definitely what advocates have been calling for and it's really, really needed,” said Asher Ross, who is leading the Immigration Coalition’s redistricting work.

“The biggest problem with the South Brooklyn lines, in our opinion, is that they would break off Red Hook from Sunset Park and take a district that was actually plurality Asian with a very large Latino share of population and make it a strong white plurality district,” Ross said of the proposed new District 38.

One alternative that has been proposed is the Unity Map, by a coalition composed of Asian American Legal Defense Fund, The Center for Law and Social Justice at Medgar Evers College, and LatinoJustice PRLDEF. Under that proposal, Districts 38 and 43 would remain largely unchanged while Bensonhurst would be largely contained within the new District 47 along with Gravesend – creating a district with a 34.3% Asian American population – rather than being split between the current Council Districts 38, 43, 44 and 47.

The Unity Map also seeks to unite communities of interest in other parts of the city. It brings together Chinatown and most of the Lower East Side into a new proposed District 1, removing Tribeca and Battery Park City, and also unites the Asian American population of Richmond Hill and South Ozone Park in Queens into a new District 32. Like Bensonhurst, those neighborhoods are also divided among four Council districts currently. The Unity Map also proposes 11 Latino majority districts, rather than the current 10, and 11 districts largely made up of Black communities of interest.

“This is an iterative process and we continue to hear public testimony on the preliminary plan,” said Eddie Borges, a spokesperson for the Districting Commission, in a brief phone interview. “We encourage people, if they’re unhappy, to either come to one of the hearings next week or come by Zoom or send an email to This email address is being protected from spambots. You need JavaScript enabled to view it.. Up to date, we’ve received more than 1,000 testimonials and we wouldn’t be surprised if we had another 1,000 people next week.”

Some have argued that while the current District 38 has recently been represented by Latino officials, including Aviles and her predecessors Carlos Menchaca and Sara Gonzalez, it is already an opportunity district for Asian representation and could easily trend that way for a future election without any changes to its boundaries.

Many of the issues around the preliminary map stem from the commission’s decision to keep the three Staten Island City Council districts contained on the island despite changes in population, affording little wiggle room to redraw lines in the other boroughs. The other choice facing the commission would likely have been to combine a portion of Staten Island with some of Southern Brooklyn, which is already the case in legislative districts at other levels of government.

That not only impacted the drawing of these Brooklyn districts, but also in part led to a new district that includes parts of Queens combined with a portion of the Upper East Side and Roosevelt Island, which has been another major source of pushback from current elected officials, advocates, and residents of those areas.

“Asian Americans made significant gains in representation in New York City government with the election of a record five Asian American members elected to City Council last year,” said Jerry Vattamala, Democracy Program Director at the AALDEF, in a statement accompanying the release of the proposal. “Yet, as the fastest growing racial group in the city, this is still an underrepresentation indicative of the historic and continued marginalization of Asians and other communities of color. The Unity Map is fair and necessary to ensuring our communities’ voices are being heard and that the long-neglected issues we care about are actually addressed.”

Steven Romalewski, director of the Mapping Service at CUNY’s Center for Urban Research, said the Unity Map and other proposals from local residents – highlighted on CUNY’s Redistricting & You website – have more flexibility than the commission’s map. “That doesn’t necessarily mean those proposals are better or worse,” he said in an email. “But it’s somewhat easier to move the lines around to achieve the goal of population equality while also meeting the other districting requirements.”

“I think it’s great that we can see these different plans on the map, because it makes it very clear that there isn’t just one way to draw the districts. And it also makes it clear that drawing a district a certain way has implications for all the districts around it, and across the city,” he added.

Local advocates are likely to advance similar proposals but there are several complicated factors to consider, said Elizabeth OuYang, coordinator of the Redistricting Task Force for Asian Pacific Americans Voting and Organizing to Increase Civic Engagement (APA VOICE), a coalition of 21 organizations not affiliated with the Unity Map proposal.

“Both the history of diluting Asian Americans into four districts in Bensonhurst and our 43% increase in APAs in Brooklyn do dictate reform,” she added.

“It has always been a challenge for us that Bensonhurst is divided into four City Council districts,” said Don Lee, chair of Bensonhurst-based Homecrest Community Services, a member of the APA VOICE coalition.

Though Lee had no complaints about the Council members from those districts, and said that they work well with the communities, he did say that it is “if nothing else, taxing.” “How can you really ever be a voice when you're only a portion of each of the districts?”

The separation of the community is also confusing for voters who live in the same neighborhood but could have different Council members from one street to the next, he noted.

“We are a very powerful voting bloc,” said Jo-Ann Yoo, executive director of the Asian American Federation, noting that Asian Americans make up more than 10% of the population in 28 out of 51 City Council districts. “Our elected officials, no matter who they are…it’s to their peril if they ignore us.”

At least one Asian American group supports the new maps. The Asian Wave Alliance, a political club that isn’t part of APA VOICE, applauded the districting commission for creating the new Asian opportunity district. “For decades, Asian residents in Bay Ridge, Sunset Park, Dyker Heights, and Bensonhurst have been splintered across four city council districts, diluting our representation and subverting our priorities and concerns,” said AWA President Yiatin Chu, in a press release. “This draft map will unite and connect the Asian communities and allow their voice be heard at the City Council.”