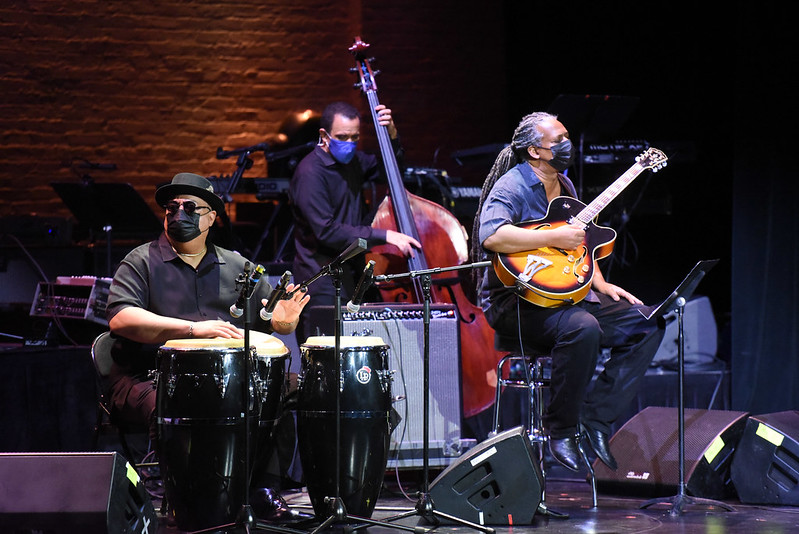 There has been a strong return to in-person entertainment in NYC (photo: Michael Appleton/Mayor's Office)

The New York City economy has rebounded significantly from the depths of the covid recession but volatile economic indicators have left the city in a precarious position.

But questions persist about recovering all of the jobs lost during the pandemic, depressed subway ridership and office occupancy, the challenges of record inflation and stagnant wages for many workers, the strange combination of low employment and a slowdown in economic growth, and more.

There are also widespread concerns that other than the significant changes of the work-from-home revolution, the city is largely reverting back toward a pre-pandemic economy, perhaps even with exacerbated inequities, in part the result of the bifurcated reality of which jobs can be done remotely.

While the comptroller’s latest Monthly Economic and Fiscal Outlook, released August 8, shows “really good business and job growth data,” inflation has continued and “is eating so badly into people’s paychecks,” Lander said during the podcast.

In June, consumer prices in the New York City area rose 6.7% from a year ago and about 22,000 private jobs were added, according to the comptroller’s office.

Rents across the city have skyrocketed, according to the monthly report, as median asking rent reached $3,500 in June, a 5% increase from May, and a nearly 35% increase from June of 2021. Apartment vacancy rates in the city are extremely low, especially so for those renting at $1,500 or below, according to a recent study from the city’s housing department.

On the positive side, not only are new businesses being opened across the boroughs, but new kinds of businesses are emerging. For a two-year stretch from late 2019 to late 2021, 2,285 establishments opened that did not fit an existing classification from the Bureau of Labor, according to the July comptroller’s office report.

“Hopefully we are going to see an era of new business generation, of creativity in technology, in healthcare, in a range of new fields,” Lander said on the podcast, referencing that new data point.

Many of the 201,800 New York City jobs still lost since the start of the pandemic, as of the end of June, were in industries that “disproportionately employ Black and Latinx workers, women, young people, and those with a high school education (or less),” according to a new economic update from economists at The New School. Those industries include education, retail, and restaurant service. Unemployment rates among Black and Hispanic New Yorkers – 10.3% and 6.7% respectively – were significantly higher than the 3.1% unemployment rate of white workers, according to the city’s comptroller’s office.

“Slower economic growth could bake in the disproportionate impact of the pandemic for these workers, who already face discrimination in the labor market at large, like having a harder time getting hired or making equal pay to white, male counterparts with the same credentials,” says The New School’s August report, issued regularly from the team at the school’s Center for New York City Affairs.

The report explains why slower economic growth is expected to continue, and how the city should be responding to that and other challenges.

It noted that while there was substantial national growth in terms of consumer spending and jobs, inflation continues to be pervasive. Gross Domestic Product – the monetary value of all goods and services produced – declined for a second quarter in the April-June period.

There is a unique opportunity now to reimagine the city’s economy to better serve all New Yorkers, the report argues, echoing prior sentiments from the Center for New York City Affairs team as well as many other experts, advocates, and elected officials, including Mayor Eric Adams. But time is marching on and the recovery is unfolding.

“The possibilities for a continued, more equitable economic recovery for New Yorkers who have borne the brunt of the pandemic are emerging,” says the report, written by Lauren Melodia, Deputy Director of Economic and Fiscal Policies at the Center for New York City Affairs at The New School. “It is imperative that we work collaboratively and strategically to design active labor market policies and programs – from vocational training to networking to public works programs and wage subsidies – that can match dislocated workers and low-income households to these opportunities.”

“The Fed’s goal is to curb inflation by slowing economic activity, but the pathway to lower prices via higher interest rates is through higher unemployment and a potential recession,” the August New School report states. “Raising interest rates raises the costs of new borrowing and discourages investment. That will have the effect of slowing the return of pandemic-affected jobs and other job growth.”

Because higher interest rates will lead to stagnant or increased unemployment, according to the report, household incomes will decline overall, contributing to lower demand for goods and services and lower prices.

“There’s good reason for anxiety that we’ll hit an economic downturn and that job growth will slow, and that has big impacts on the city’s tax base, on job creation, on home purchase,” Lander said on the podcast. “A lot of uncertainty we’re facing.”

Although the city’s 2022 fiscal year, which ended June 30 of this year, saw “very strong” tax revenue, Lander said the stock market drop of this calendar year will negatively affect New York City’s income and capital gains tax collections, which rely heavily on Wall Street firms and people’s earnings from stock investments. (Despite the unfavorable economic outlook, Lander assured that pensions are solid and the system is well funded - when pension fund returns are down, the city is forced to put more dollars into retiree payouts through the operating budget.)

“We did finish the year very strong, but here too there are really some dark clouds on the horizon,” he said. “I don’t foresee tax revenues continuing to be strong at anything like those levels in the years to come.”

Similarly, at the state level, the State Division of Budget recently released its first quarterly update on the fiscal year’s enacted budget financial plan. It reports favorable June economic results but those have been overshadowed by unfavorable adjusted projections going forward.

“I think we all have recognized that we are in a very volatile time,” New York State Comptroller Tom DiNapoli said during his own recent appearance on Max Politics. “I think the update reflects the fact that the economy certainly, broadly, nationally, is slowing. New York is going to be impacted by that.”

DiNapoli said taxpayer migration – most prevalent among upper-income New Yorkers – has not dramatically affected the state’s tax revenues because many who have moved out of the city have stayed within the state. However, he warned that any net migration among high-income taxpayers could negatively impact the city’s revenues generated by personal income taxes.

And DiNapoli again raised concerns about how many wealthier New Yorkers may have left the state altogether for lower-tax places, though he added that some may still be required to pay New York income taxes.

“As underlying macroeconomic conditions become less favorable for growth, City and State government must now play a more active and expansive role in upgrading the skills of dislocated workers to prepare them for better jobs when economic growth resumes, and ensuring that community college enrollments rebound,” the report argues.

City, State, and non-profit partners should work together to ensure that the many billions of dollars coming from the federal government for manufacturing and renewable energy industries are translated into good jobs and job training for New Yorkers, the report continued.

At the federal level, the CHIPS and Science Act -- just passed by Congress and signed by President Joe Biden -- provides subsidies and tax credits to companies that manufacture semiconductor chips in the United States. New York is one of the largest semiconductor-producing states in the country, according to the report, and leaders are hoping to grow it significantly. In anticipation of the federal law championed by New York’s Chuck Schumer, the Senate majority leader, state leaders passed a champion bill to provide state subsidies to companies that bring semiconductor job growth to New York.

“New York agencies and workforce development organizations must work together to develop a strategy and set of guardrails that brings this [federal] money into the State as meaningful job growth and not simply as corporate tax breaks with no strings attached,” the New School report contends.

According to Governor Kathy Hochul, New York’s “Green CHIPS” law “will help New York capitalize on a historic opportunity to attract chip manufacturers to the state, generating at least $3 billion investment, creating 500 new jobs per project, and lowering greenhouse gas emissions related to chip production.” It also “positions New York State to greatly benefit from the federal CHIPS and Science Act to increase domestic semiconductor manufacturing” and “will help the State to conform to the requirements of the federal program, enhancing its competitiveness against other states looking to attract chip manufacturers, all while ensuring this expansion of advanced manufacturing is environmentally sustainable.”

The Inflation Reduction Act, just passed by both houses of Congress and headed to Biden’s desk, is set to funnel hundreds of billions of dollars into renewable energy across the country, including in New York.

“The manufacturing and construction jobs that could result have the potential to meet the needs of the same workers displaced by and disproportionately burdened by Covid job loss and job recovery,” the New School report says in reference to the Inflation Reduction Act. “New York agencies and workforce development organizations must now work together to push for passage of this bill, and design policies and programs that prepare workers and consumers to take full advantage of the jobs that will be in demand in the near future.”

Meanwhile, New York is also expected to see a major influx of federal funding toward infrastructure projects as a result of the prior Bipartisan Infrastructure Law.