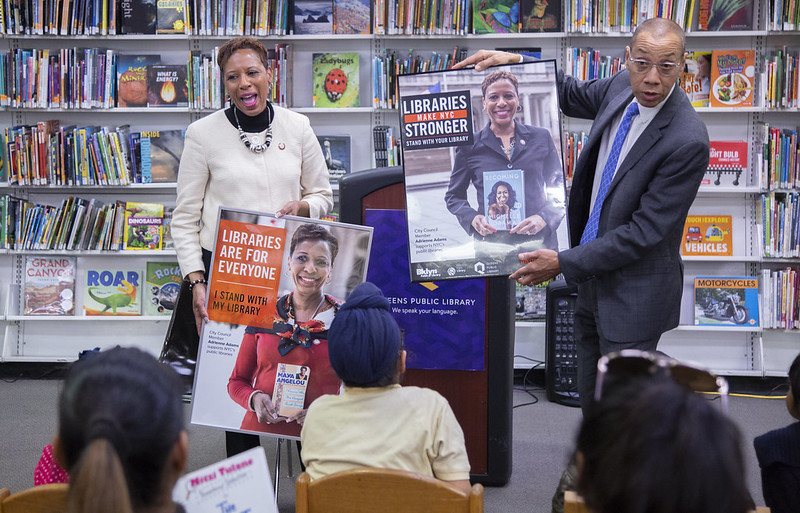 The new fiscal year 2023 New York City budget includes $452.8 million in expense funding for the city’s three library systems and research libraries — a $20 million increase from last year’s $431.9 million. Additionally, the City Council put another $15.7 million in operating funds from its discretionary monies, set to be shared among the three systems, bringing the total expense funding for libraries in this year’s city budget to $468.5 million.

That money helps operate over 200 public library branches throughout the five boroughs, while the city’s library systems also raise private philanthropic money from donors of all sizes.

The increase for the library systems — Brooklyn, Queens, and New York, which includes Manhattan, Staten Island, and the Bronx — is funding that members of the City Council and library officials sought during the budget process.

The added funding is part of the $105 million increase over last year’s adopted budget across the city’s arts and cultural institutions in the $101 billion budget agreed to in June by the City Council and Mayor Eric Adams, a first-year Democrat.

The city’s libraries have also been allocated $129.2 million in capital budget funds for infrastructure, down from last year’s capital budget of $152.1 million.

For officials within the library systems and City Council members, the budget boost is a win, as Mayor Adams’ $98.5 billion preliminary budget released in February proposed $418.1 million in operating funding across the three systems (later increased in the mayor’s executive budget by $1 million to $419.1 million to accommodate heat, lighting, and power subsidies).

In the mayor’s executive budget, released in April, funding for the library systems sat at $419.

In the end, the systems were allocated another nearly $48 million via Council negotiations with the mayor and the additional Council discretionary funding, for the total of $468.5 million in operating funds.

Officials within the library systems have said they are pleased with the increase, and that following major pandemic challenges, the allocation will help the city’s libraries expand programming and staffing, fix infrastructure, and address other needs in the systems.

“We are grateful to Mayor Adams, Speaker Adams and the entire City Council for their ongoing support of Brooklyn Public Library — and libraries all across the city — which will ensure we can continue to help the city recover, providing essential programs and services to New Yorkers in every neighborhood,” said Fritzi Bodenheimer, Brooklyn Public Library’s press officer, on the budgetary allocations in a statement to Gotham Gazette.

In May, leaders of the three library systems testified at a City Council executive budget hearing held jointly by the Council’s Committee on Finance and Committee on Cultural Affairs and Libraries. The officials asked the City Council to allocate the additional $15.7 million in operating funds that was subsequently granted along with other funding for infrastructure needs in the final budget decision.

At the hearing, officials stressed the importance of using additional funding to support programming for teenagers after so much pandemic upheaval, along with further support for adult literacy programs, maintenance of digital programs, and continued outreach services for justice-involved people. The increased funding is expected to cover some of these services, including programs for teenagers.

“We're focused on making sure that we are attracting and keeping teens involved in the library system as long as they can, and trying to combine the importance of spaces for teens, with the importance of learning tech skills,” said Linda Johnson, president of Brooklyn Public Library, at the hearing.

In response to the budget allocations, a spokesperson for City Council Member Chi Ossé, a Brooklyn Democrat who chairs the cultural affairs and libraries committee, told Gotham Gazette that Ossé is “very pleased with the significant budgetary wins” that were secured for the city’s libraries this fiscal year. But they declined to provide further comment on the adopted budget, which Ossé voted against.

“Even though I voted ‘no’ on the budget, throughout the budget negotiation process, I secured several significant wins that will benefit my constituents and city, including tens of million of new dollars for cultural institutions, libraries, and arts in schools,” Ossé wrote on Twitter, following the budget decision, where he was one of six Council members to vote “no” while there were 44 in favor.

Following the adoption of the budget, Elisabeth de Bourbon, director of communications for the Queens Public Library, also expressed gratitude for the support shown by both the mayor’s office and City Council in a statement to Gotham Gazette. She said that the increase in funding “demonstrates the administration’s commitment to the city’s public libraries,” but was unable to comment further on what the additional funding would be used for.

Amy Geduldig, Assistant Director of Public Relations at the New York Public Library, said that “the funding for Fiscal Year 23 allows branches to provide vital resources and services to communities throughout the city.”

As far as the larger city budget, additional funding for the city’s arts and culture sector includes $40 million to support Cultural Institution Groups, a coalition of 34 arts-related nonprofits, and to provide across-the-board grant increases for all Cultural Development Fund recipients who are supported by the New York City Department of Cultural Affairs through annual nonprofit funding awards.

Some of the organizations and nonprofits that will receive funding include the Coalition of Theaters of Color, the Ghetto Film School, and the SU-CASA arts engagement program, which places artists and arts programming at senior centers across the boroughs.

New York state’s public libraries also saw increases in expense funding this year, following the approval of the state budget in April. Significant increases to state libraries for the 2022-2023 fiscal year include nearly $100 million in operating aid (a 6% increase from last year), and an additional $34 million in construction aid for the state’s public library systems.

“State library aid ensures that every community and every New Yorker has access to quality library materials and services. According to the State Education Department, every dollar invested in state library aid yields seven dollars’ worth of local library services,” reads an April press release statement from State Senator Sean Ryan, a Western New York Democrat who chairs the Senate’s State Libraries Committee.

Ryan was also successful in efforts to restore and increase funding for Harlem’s Schomburg Center for Research in Black Culture in Manhattan and the Langston Hughes Community Library in Queens, according to the press release.

Since the adoption of the new city budget in June, communities are starting to see investments in their library branches, for instance, $9.6 million in capital funding to upgrade the Queens Village Public Library.

“Libraries are vital community centers and hubs of opportunity that serve all New Yorkers, regardless of age or background,” City Council Speaker Adrienne Adams said in a library-focused press conference about the funding, which was announced on July 12. “This funding allocation will have an immense impact on this neighborhood and all users of this library branch.”

The funding will go to interior and exterior renovations, repairs to the library’s roof, and the installation of a new HVAC system — the Queens Village branch, built in 1952, has not received major renovations since being constructed.

“Libraries are more than just a place to read your favorite book; they serve as community centers for residents to socialize and engage with one another and access the internet and essential services,” said City Council Member Linda Lee, who also spoke at the press conference. “Residents deserve to feel a sense of pride in their neighborhood, and this investment will make an impact on young people and seniors throughout Queens Village.”