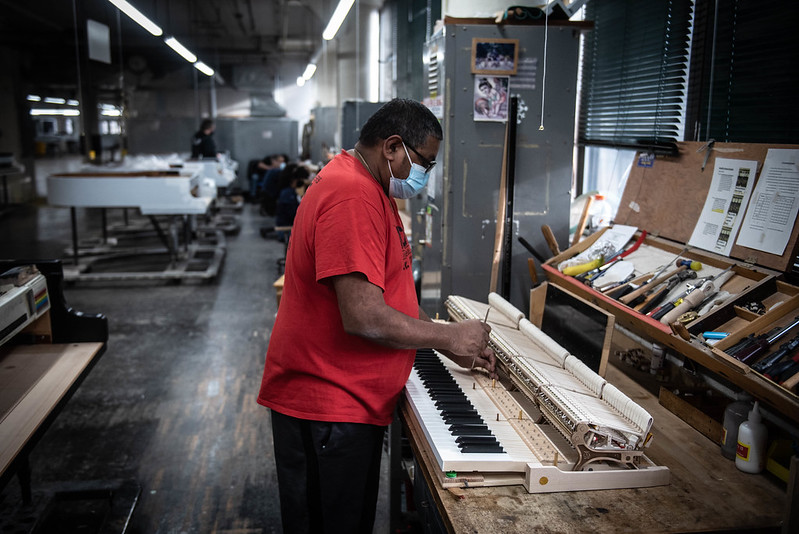 New York City has recovered many of the jobs lost at the height of the covid pandemic and some industries have expanded in the shifting economic landscape. But unemployment and inequality remain high, and there is too often a mismatch between employers seeking a workforce to power growth in areas like health care, tech, and life sciences and those in need of jobs. It is a challenge and opportunity Mayor Eric Adams discussed regularly when he was running for office last year.

Against this backdrop, workforce development providers – career services programs and a host of supplemental educators – have seen their budgets slashed in recent years, while the demand for the safety net services they provide has skyrocketed. The situation has created a "pressure cooker" environment for the industry, according to a new survey from New York City Employment and Training Coalition (NYCETC), Workforce Professionals Training Institute, and The New School.

"In tandem with the stress brought by the pandemic, providers’ budgets have been drastically cut, leaving some (or many) struggling to survive," the report reads, citing drops in city, state, and philanthropic dollars.

Annie Garneva, NYCETC's interim CEO, said the onus is on the New York City government, the single largest contributor to workforce programs, to intervene. “This report and our experience over the last two years further confirm that our city has a lot more to do to ensure every New Yorker has the opportunity to access the skills and training they need to thrive," she wrote in a statement accompanying the report.

According to the survey, the most common type of workforce service is job placement. Organizations also frequently provide sector-specific training, mid-career "upskilling," and digital and financial literacy.

Ninety-six percent of respondents to a 2021 NYCETC survey of providers said they saw decreases in revenue during the first year of the pandemic. The new survey found many of them are now struggling to provide crucial services to their clients, who include some of the lowest-income New Yorkers, immigrants, public housing residents, justice-involved individuals, and women, who have been driven out of the workforce at higher rates than men. In the case of workforce development organizations that also offer direct cash assistance or housing services, 90% and 88%, respectively, are at capacity or can't meet demand.

The combination has put a strain on the workforce development sector – making it difficult to retain both underpaid staff and clients, many of whom must forgo training for jobs now in order to pay the bills – while the pandemic has put an additional spotlight on it as a potential boon to New York City's long-term economic prosperity.

“As the Workforce Landscape report highlights, New York City's workforce development community has and will continue to play an important role in fortifying the most vibrant economy in the world,” said Deputy Mayor for Economic and Workforce Development Maria Torres-Springer, in a statement accompanying the release of the report. "The administration looks forward to working with the NYC Employment and Training Coalition and its membership towards a shared goal of building a workforce that not only recovers from the impacts of the pandemic but thrives in its wake."

Workforce development has been a consistent theme in Adams' pronouncements on the economy and the plight of marginalized New Yorkers, and something he has pledged to make a signature issue. A portion of his economic recovery "blueprint" is dedicated to bolstering the workforce with investments in career pipelines, adult education, tangential services, and worker protections. While many of the proposals have yet to materialize, workforce experts have generally endorsed the spirit behind them.

"Producing quality employees of the future can't stop because of covid," Adams told reporters in August after announcing a program intended to employ 2,300 construction and industrial trade workers. "You can't put this city on pause because there's a crisis."

According to the new “workforce landscape” report, while the city’s new fiscal year 2023 (FY23) budget “brought funding levels back to FY20 levels, the financial hardships and their consequences are compounded and continue to be felt, as expressed in the results reported by this survey’s respondents."

Of the 143 workforce development organizations surveyed in the new report, close to two-thirds provide services outside of career and employment programs. City funds accounted for 39% of revenue for those multi-service providers' budgets and 25% of workforce-only organizations', with the rest funded by state, federal, and private dollars. In the 2021 survey, 64% of respondents who received city funds said they saw a decrease in city contracting and 72% said they saw a decrease in discretionary funding from the City Council.

Close to a third of respondents to the new survey said funding and staffing have become even more of a challenge during the pandemic. The lack of competitive wages and the in-person nature of many training programs likely contributes to staffing shortages, according to the report. It states 58% of workforce development staff earned below $55,000 annually in 2020, despite a disproportionate number holding a bachelor's degree or higher. And Black, Latino, and Asian workers are more likely than their white colleagues to earn below that threshold.

While multi-service agencies have seen a rush on their lifeline services, they have faced difficulty recruiting clients to workforce development programs. Forty-two percent of career readiness, college access, and job placement programs were below capacity, according to the survey.

The report attributes the low demand to the need for immediate employment, or "survival jobs," and the lack of collateral support, like childcare or stipends, that could help low-income New Yorkers afford to enroll in training courses.

Restrictions built into most government funding sources often limit organizations from offering wrap-around services. Those conditions, along with staffing shortages, have made it difficult for workforce development providers to adapt their programs to the hybrid office-setting and meet new needs in growing sectors. Thirty-nine percent of survey respondents said updating curriculum for the post-covid economy was a moderate to extreme challenge.

"You can't pursue training and employment if you're not certain if you're going to have a roof over your head next month," said Eli Dvorkin, editorial and policy director at Center for an Urban Future, a research and advocacy group focused on economic opportunity that was not involved in the survey.

"The effectiveness of these providers' services are really contingent on meeting the full scope of the needs that their clients are facing. It was really dramatic to see in the data," Dvorkin said.

Mayor Adams has made workforce development a central component of his economic recovery agenda, which is still unfolding.

“While the problems highlighted in this report mirror many of the workforce issues being seen nationwide, Mayor Adams is dedicated to ensuring that all New Yorkers can earn a living wage and share in our city’s prosperity," a mayoral spokesperson wrote in an email to Gotham Gazette.

"That is why this administration has prioritized working strategically across city agencies and in tandem with key external partners," the spokesperson wrote. "The non-profit providers featured in this report are critical partners to the city and we look forward to continuing our work together to make economic security for all city residents a top priority.”

In his economic recovery "blueprint," released in March, the mayor laid out goals to expand childcare, high speed internet, financial counseling, and stipends for jobs program participants. A few months later, the administration unveiled another plan to expand childcare in underserved areas, with direct connections to workforce opportunities, boosted by new state funding. The goal is to increase the number of childcare slots by 41,000 over two years using an additional $800 million investment (bringing total city childcare spending to $2 billion over four years).

Adams set lofty goals on the campaign trail, including a digital portal to map local talent and connect employers with job seekers, internships, and apprenticeships fueled by public-private partnerships, corporate involvement in developing Department of Education and CUNY curricula, free community colleges, and a commitment to put 10% of the city's economic development dollars toward workforce programs. Several of these proposals have seen little apparent progress and it is unclear to what extent the administration is pursuing them.

Adams' recovery blueprint also included expansion of digital literacy and adult education through CUNY and the public library systems, and career pipelines in tech, healthcare, and STEAM. And, echoing calls from providers, the plan emphasizes the need to de-silo the workforce development ecosystem, which is currently funded through isolated programming across 21 city agencies. That has made it difficult to align career services with industry trends and scale-up effective programs. Adams recently gave advocates more cause for hope that the administration may follow through.

Adams also signed an executive order to streamline operations at the city agencies offering these services.

Executive Order 22 requires the Mayor's Office for Talent and Workforce Development to design a strategy and report for inclusive workforce development, and gives it responsibility to coordinate contracting across multiple agencies. The order shifts industry partnerships from the Department of Small Business Services into the office's portfolio. It also established an Interagency Talent and Workforce Development Cabinet and formalized the "Future of Workers" Task Force, a group of industry leaders, educators, workforce providers, and labor, to guide decisions.

According to Dvorkin, the new powers of the office ("which was not among the strongest mayoral offices," he said) could bolster its position within the workforce landscape.

"These are not enormous changes just yet but they signal some real intent around building stronger infrastructure to make future investments more effective and ideally more accountable," he said.

The next big question, he added, is: "can the city produce a budget for the next fiscal year that invests significant new resources in workforce development and that can help realize the promise of the city's most effective programs?"