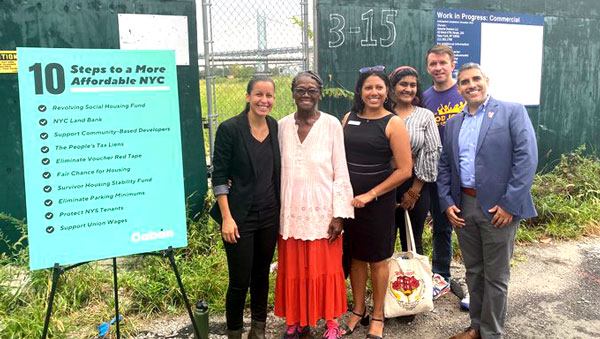 *This article is published in partnership with New York Focus*

New York City Council Member Tiffany Cabán on Tuesday announced her support for a proposed rezoning that will allow a three-tower, 1300-unit housing development in Astoria known as Halletts North, in a shift from how other progressive lawmakers have approached recent land use decisions.

Cabán’s support for Halletts North likely ensures the full City Council’s approval of the project, since the Council traditionally follows the lead of the local Council member in deciding whether to give the go-ahead on land use matters.

One in four units in the development will be earmarked for affordable housing. Cabán and local community organizations negotiated with the developer to increase the number of affordable units and the number of two- and three-bedroom apartments in order to accommodate local families, she said.

The most deeply affordable units will be the 10% reserved for tenants making 30% or less of the New York City area median income, or $35,790 for a family of four. Overall, the development will double the number of local units available to renters making less than 50% of the area median income, Cabán noted.

The developers have also invested $16 million in cleaning up the site from toxins left by its former industrial use, and agreed to contribute $1 million to the neighboring public housing development, build a community space that local nonprofits will be able to use rent-free, and incorporate a public, waterfront green space into the development, Cabán said.

“The best we can hope for without rezoning this lot is a last mile [trucking] facility where some massive corporation like Amazon would pay our neighbors garbage wages for backbreaking work,” Cabán said. “A no vote today would be a vote for that.”

In recent years, New York has built less housing as a portion of its population than almost any other large city in the country. Cabán’s support for the project comes as various factions of New York’s left attempt to work out their approach to housing supply, and decide how to respond to developers seeking city approval to build largely market-rate housing on privately-owned land.

“There's currently no consensus on what a progressive land use approach should be,” said Samuel Stein, housing policy analyst at the anti-poverty nonprofit Community Service Society. “Because there's a debate or diversity of approaches, that leaves individual Council members with a bit of latitude in terms of defining their own position.”

Cabán’s decision to support the Halletts North rezoning sparked significant and heated debate among members of the New York City chapter of the Democratic Socialists of America (DSA), said DSA member and housing organizer Andrew Hiller. The Queens DSA housing working group tweeted that the decision “is an insult” to nearby public housing residents who couldn’t afford the new units. Cabán is a DSA member and received the group’s coveted endorsement during her 2021 run for City Council.

By supporting the Hallets North development, Cabán is taking a different approach from other members of the City Council who in recent months have blocked, opposed, or threatened to block major developments in their districts.

In May, Council Member Kristin Richardson Jordan, a socialist who was given a stamp of approval by a political action committee affiliated with Rep. Alexandria Ocasio-Cortez, blocked a proposed development dubbed One45, which would have built over 900-units of housing in central Harlem. Half of the development would have been earmarked for affordable housing, mostly at higher income levels than the affordable housing at Halletts North.

Richardson Jordan called the development “nothing less than white supremacy,” citing concerns that it would gentrify the neighborhood and that the income eligibility standards for the affordable units would still price out most Harlemites.

Shortly after taking office earlier this year, Richardson Jordan told Patch that she “would rather have lots sit empty than have them filled with further gentrification.”

Just before blocking the development, Richardson Jordan released a rubric detailing what affordability standards were necessary for any development in her district to receive her support. The rubric requires that over half of all apartments in a development be earmarked for people earning at most 30% of the New York City area median income, and nine in ten earmarked for people earning at most 80% of median income. According to these standards, the rents on most apartments in a development would range from $419 per month for a studio to $722 for a three-bedroom.

Since tenants who pay market rates generally subsidize tenants living in affordable units, an arrangement where such a large majority of tenants pay below-market rates is unlikely to work for private developers hoping to make any profit, some affordable housing advocates noted.

“There are limits to how much [affordability] we can get in projects that are on privately-owned sites,” said Rachel Fee, executive director of the New York Housing Conference, an affordable housing advocacy group. “It’s really important that the Council members, when they do get these applications, view it as an opportunity to add affordable housing in their communities.”

Last week, Patch reported that developer Bruce Teitelbaum, who owns the site that One45 was slated for, plans to turn part of it into a truck depot.

“The overwhelming problem with both One45 and Halletts North is that they’re privately-owned parcels of land where the developer has the ability to walk away from the table and then you get no housing,” said Cea Weaver, a democratic socialist and campaign coordinator of Housing Justice for All, a coalition of New York organizations representing tenants and homeless people. “Tiffany [Cabán] made a different calculation than Kristen Richardson Jordan on what the best path forward is.”

“Tiffany did a good job, in my opinion, in achieving some kind of affordability on privately owned land,” Weaver added.

Richardson Jordan did not respond to a request for comment.

More recently, Council Member Julie Won, a Democrat who represents a portion of western Queens south of Cabán’s district and was also supported by the AOC-aligned PAC and other progressive groups in winning her election last year, warned that it may be “too late” for a proposed major development in her district to win her support. The proposed Innovation QNS complex, which would be built in a largely industrial section of southeastern Astoria, would contain over 2,800 units, with one in four being set aside for New Yorkers at 30 to 60% of median income.

Won and Borough President Donovan Richards are pushing for the developer to make half of the units affordable, the New York Post reported.

Won did not respond to an email asking whether she would support Innovation QNS if it met the level of affordability agreed to at Halletts North.

‘A Very Heated Question’
In addition to announcing her support for Hallets North, Cabán also introduced on Tuesday a ten-point platform to promote housing affordability.

The first four points in the plan call for New York City to partner with affordable housing developers to create permanently low-rent housing on city-owned land, a strategy that’s seen increased interest from local governments around the country.

A 2016 report from the city comptroller estimated that this strategy could allow for the creation of nearly 60,000 units of permanently affordable housing — a significant number, but still far short of the hundreds of thousands of housing units that housing groups estimate are necessary to bring New York’s affordability crisis under control.

Most of the other points in Cabán’s platform focused on promoting low-income and disadvantaged tenants’ access to rental units, through strategies like increasing the value of city-sponsored housing vouchers, banning landlords from asking about criminal records, and enacting more stringent eviction protections and limits on rent increases. It also includes a plank to “eliminate parking minimums” that accompany new housing development.

The platform does not address how legislators should approach the construction of new housing on privately-owned land — something that DSA doesn’t have an official position on either, Hiller noted.

Most academic research finds that building market-rate housing helps stabilize or lower rents at both the neighborhood and city levels. In a review of six recent studies, UCLA researchers wrote that five found that market-rate housing makes nearby rental housing more affordable, while one found mixed results.

Cabán said that she supports “many other things” to increase housing supply that weren’t included in her platform, pointing to legalizing basement apartments as one example. She said that the question of whether more market-rate housing is part of the solution to high rents is “tough.”

“Would I say that that is in a vacuum, in and of itself, the answer? No,” she said. “For-profit development will never produce the scale or quality of housing that our lowest income neighbors need and deserve.”

Much of New York’s left is skeptical of market-rate housing as a tool to promote affordability, preferring measures like the “good cause eviction” bill to cap rent hikes statewide.

“There's a broad range of opinion in DSA on that question, and it's a very heated question within the organization. We have work to do amongst ourselves to democratically arrive at a political strategy there,” Hiller said of the approach to housing development on privately-owned land.

Many proponents of affordable housing do support a greater focus on adding to overall housing supply.

“Being pro-housing in general seems to me like a really important part of a progressive agenda. We really need to add to our supply,” Fee said, noting that her top priority for new development is ensuring maximum affordability.

Weaver said that more housing is needed — potentially including privately-owned housing, given current political realities — but that left to itself, the market won’t help the people who need affordable housing most and will do "more harm than good."

“I do think that we need tools to be producing more housing, and then we need to take a pretty serious look at what sort of housing constraints exist in the city because I do think that we're not building enough of it. And that has long term impacts on affordability for a ton of people,” she said. “But the thing is, when we build unregulated housing, it doesn't actually serve the people who are most deeply looking for housing.”

Cabán said that her priority for the future is creating “high-quality social housing owned and managed by the people who live there.”

“Even though this is the right choice for today, I want better choices for tomorrow,” she said.

This article is published in partnership with New York Focus