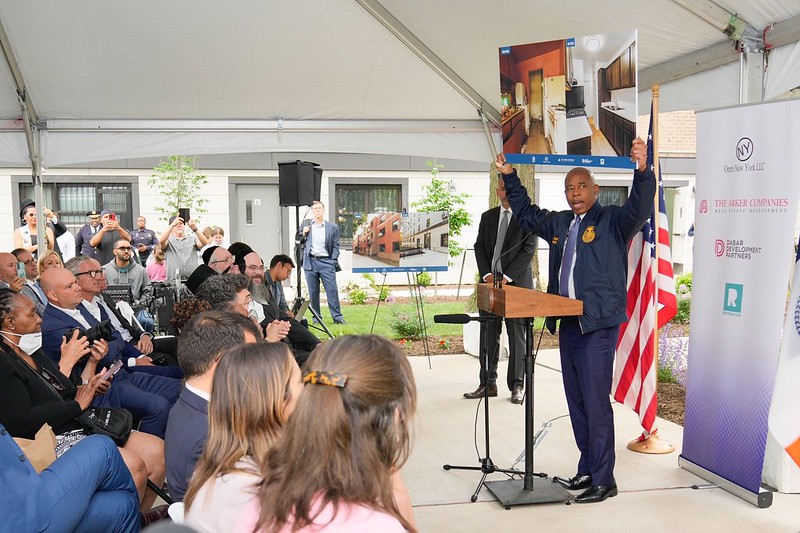 UPDATE (9/19/22): Mayor Adams and Chief Technology Officer Matthew Fraser on Monday announced the new "Big Apple Connect" program at NYCHA’s Langston Hughes Houses in Brownsville, Brooklyn. The program will provide free internet and cable to 300,000 residents at 200 NYCHA developments by the end of 2023. The piece below has been updated with additional information based on the announcement.

The program, called Big Apple Connect, is a partnership between the New York City Office of Technology and Innovation and internet service providers that serve the New York City Housing Authority (NYCHA), which is home to more than 400,000 New Yorkers. Before the plan was made public by the mayor’s office, one of the providers, Optimum, had already publicly posted details of its collaboration with the city.

A City Hall spokesperson declined to provide further information but confirmed that the mayor would make an announcement on Monday.

Optimum is one of several providers in the city that supply services to NYCHA residents. According to Optimum’s website, under the new initiative, thousands of residents will receive free internet and basic cable services without having to bear the costs for equipment, installation, taxes, or fees. It’s unclear what the terms of the deal are and what it will cost the city to run the program.

Besides Optimum, the city has also partnered with Charter, covering the majority of developments owned and managed by NYCHA. According to the mayor's office, the city is also negotiating with Verizon to join the program.

“A 21st-century city like New York deserves 21st-century infrastructure, and, today, we continue our quest to bridge the digital divide with the landmark rollout of ‘Big Apple Connect,’” Mayor Adams said in a statement on Monday. “For too long, lower-income communities, immigrant communities, and communities of color have been ignored when it comes to accessing the critical digital tools to help them succeed. Broadband is no longer a luxury, but a necessity that all New Yorkers should have access to."

NYCHA is a public authority largely under the mayor and city government’s purview but it operates under federal regulations and is also partly the responsibility of the state. The authority is currently under a federal monitor and has an estimated $40 billion in infrastructure needs that city and state officials have made limited attempts to fill for years in lieu of federal investment, though there has been more movement recently.

The new internet and TV program will also not affect benefits from federal programs such as the Lifeline program which lowers monthly internet and mobile costs and the Affordable Connectivity Program, which subsidizes internet bills as well as device purchases. As Optimum noted on its website, customers who currently rely on the ACP benefit for their current internet services “may be eligible to apply for and transfer those benefits to a wireless Mobile plan.”

Big Apple Connect is the city’s latest effort at bridging the city’s stark digital divide. Roughly 15% of city residents do not have access to broadband internet of any kind at home, a problem that was highlighted by the COVID-19 pandemic as the city shut down to a significant degree, many services went online and everything from work to school went remote. It’s a particularly pressing issue for NYCHA residents, who are low-income and mostly Black and Latino.

In January 2020, then-Mayor Bill de Blasio announced an Internet Master Plan aimed at achieving universal affordable broadband access across the city. In July that year, he accelerated the program with a $157 million capital investment to build broadband infrastructure, with a specific focus on public housing residents. The plan to build out infrastructure was put on pause, however, by the Adams administration earlier this year.

There have been other piecemeal efforts as well. In April this year, City Council Member Julie Menin announced a partnership with Stanley Isaacs Center, a service provider, and EducationSuperHighway, a nonprofit, to provide affordable Verizon and Spectrum internet plans to residents of the Isaacs Houses and the Holmes Towers on the Upper East Side.

The announcement on Monday comes in the wake of yet another controversy involving the scandal-plagued public housing authority. Residents of the Jacob Riis Houses in Manhattan faced a scare over possible arsenic in their tap water, a finding that was later determined to be false. That controversy was quickly followed by Mayor Adams announcing on Thursday that he is restructuring NYCHA’s top leadership, which had been planned before the Riis debacle. Gregory Russ, Chair and CEO of NYCHA, will see his role pared down to only chair of the agency and NYCHA Executive Vice President of Legal Affairs and General Counsel Lisa Bova-Hiatt will serve as interim CEO while the administration searches for a permanent replacement.