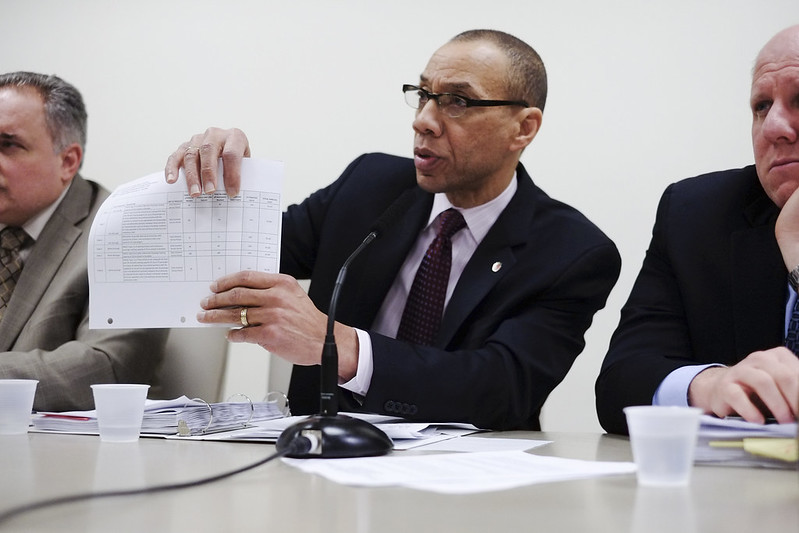 In an 8-7 vote, the New York City Districting Commission on Thursday rejected its latest proposal to redraw the city’s 51 Council districts, sending the electoral map back to the drawing board.

After months of analysis and more than 9,000 submissions from the public, the 15-member commission could not find consensus on redefining City Council district lines to accommodate population shifts shown in the 2020 Census. Those included an increase in the city’s population of 630,000 residents since the 2010 count and many other demographic shifts.

Commission members who voted against the proposal cited varying reasons for their votes, including concerns about divisions of communities of interest to diminished political power for certain regions and neighborhoods. Those who voted in favor pointed to how the new map addressed major concerns about the preliminary July proposal, making changes that the commission’s executive director, Dr. John Flateau, explained ahead of the vote. The new map required nine yes votes to be sent to the Council but fell short.

If the map had been approved, it would have been sent to the City Council for its assessment. Instead, the Commission will now reconsider the revised proposal as it seeks to address the concerns of dissenting commissioners.

The no votes came from Borelli’s three appointees: Marc Wurzel, Kevin Hanratty, and Darrin Porcher; mayoral appointees Maria Mateo, Joshua Schneps, Lisa Sorin, and Kai-Ki Wong; and Michael Schnall, an appointee of the speaker. The vote made it apparent that Borelli’s and Mayor Adams’ appointees have continued to be largely in lockstep during the process. That was the case even as commission chair Dennis Walcott, an appointee of the mayor, was among the yes votes.

“My commissioners were never going to accept a job half-done,” Borelli said in a text message on Thursday. Borelli has been adamant throughout the process that Staten Island's three Council districts should all remain island-only. “The latest drawings still left significant issues on the table, and although they are going back to the drawing board, at least it's with a better idea of what needs to be done,” he said.

The latest map was a revised version of an earlier proposal released in July, which was met with significant opposition from various quarters. The initial proposal had kept the three Council districts on Staten Island largely unchanged and without any crossover into another borough, an anchoring decision that impacted how many other districts were drawn. But the latest map extended the Mid-Island district into Brooklyn and also undid many other contentious boundaries from the preliminary map passed in July.

Schnall said he found the final process “a little unsettling and frankly, unfair,” as he voted against the proposed map. “A few individuals undid some of the work of the many, often at the last minutes of a mapping session, which got finalized in these maps,” he said.

Schnall criticized what he called the “dilution” of political power in the Bronx from the redrawing of District 8, already a Bronx-Manhattan crossover district, which shifted more toward the East Harlem side in the latest map, as well as the inclusion of a Brooklyn neighborhood in the middle Staten Island district. As a Staten Island resident, he seemed to take particular issue with that latter decision.

“I resent the fact that Staten Island has been blamed for all the troubles identified in the first draft…This Brooklyn addition dilutes Staten Island's political power and sets the borough back 10 years in the progress we've made to establish ourselves and chart our own future as a borough,” he said. The new map he objected to included what was said to be about 16,000 Brooklynites in the largely Staten Island 50th Council District.

Walcott acknowledged Schnall’s concerns but defended the work of the commission and how it unfolded as he voted for the new maps. “I think the challenge is making sure that we don't undermine all the hard work and allow the process to unfold to the next step because I think the commission has done an excellent job in meeting its responsibility and its due diligence,” he said.

But Wurzel echoed Schnall’s criticisms in his own vote against the proposal. “It's ironic that as soon as we as a commission walked away from having three districts on Staten Island, more problems developed, some inevitable and some self-inflicted,” he said of problems with the map he voted against on Thursday.

He also took issue with proposed lines in other boroughs. “We've twisted, divided and cannibalized several communities in a handful of competitive, fair-fight districts in Queens and Brooklyn,” he said, in an apparent reference to a perceived lack of Republican-Democratic competition in parts of the new map.

Other commissioners who supported the new proposal pointed out that they had listened to feedback on the preliminary maps and corrected perceived deficiencies, reuniting several communities of interest that had been split in the earlier proposal.

Mateo voted no on the proposal, raising concerns about the dilution of Dominican voting power in Districts 2 and 7 in Manhattan. She said it is important for the commission to hear more from Latino New Yorkers as it continues its work.

Several of the commissioners said the districting process was inherently flawed because of a state law that only allows a 5% deviation in population between the most and least populated districts. The commission also had to adhere to criteria set by the U.S. Constitution, the federal Voting Rights Act, and the City Charter.

Following the vote, Dr. Lisa Handley, an expert retained by the commission to conduct a racial voting bloc analysis of the map, testified on the considerations that went into the latest proposed maps. “[T]he plan that you drew passed Voting Rights Act muster, in my opinion,” she said. “I'm not sure what's going to happen now.”

Handley told the commissioners that the proposed maps maintained the number of Black and Hispanic opportunity districts in the city while adding one new Asian opportunity district, accounting for the increase in Asian Americans, the fastest growing population in the city. “You would have been successfully sued had you not done that,” she said.

For his part, Mayor Adams appears content with the commission continuing its work as dictated by Thursday's vote. “The Commission heard public testimony from different communities across the city who were concerned about the dilution of their voting power and the risk of diminished representation in city government," said mayoral spokesperson Fabien Levy, in a statement to Gotham Gazette. "We applaud the independent redistricting commission for their willingness to continue their great work and address these concerns now, while the public process continues to move forward.”

City Council Speaker Adrienne Adams, on the other hand, expressed dissatisfaction with the vote. "I am disappointed that the Council and public will not have the formal opportunity to review the new maps that the Districting Commission proposed and rejected," she said in a statement. "The public engaged in the redistricting process at record levels over the last several months, providing input and testimony regarding safety measures and protections for historically marginalized communities of color and communities of interest, as mandated by the Voting Rights Act and New York City Charter. The Commission appeared to have taken this seriously in its revisions, with new maps deemed to be in compliance with the Voting Rights Act. Yet, the public has not been able to access these newly proposed maps."

"I urge the Commission to make these maps fully available to the public, so there is complete transparency on the newly proposed districts and how they addressed public concerns. It is also critical for there to be a clear timeline of the next steps and public process," she added.

With the final approval of the maps now delayed, activists are hoping that their concerns about the proposed maps will be taken into consideration.

“In these newly proposed maps, the Commission clearly heard the concerns of some but not all New Yorkers. In particular, in South Brooklyn’s Council Districts the proposed lines are an improvement from the previous version and reflect the city’s Asian and Latino population growth and feedback from residents,” said Murad Awawdeh, executive director of New York Immigration Coalition, in a statement. “Yet, we cannot ignore that immigrant communities continue to be split, including in Southeast Queens and in the Northwest Bronx, meaning additional changes need to be made to ensure community members have a chance at fair representation. By not moving the proposed maps to a vote by the NYC Council, we hope the Commission will use the time to work to ensure that more New Yorkers are heard in this process.”

The commission will now work on a new map of Council districts, which it must pass to present to the current Council for approval or rejection with notes. If the Council approves the map, it goes into effect for next year’s elections, where all 51 Council seats are on the ballot. If it rejects the maps, the commission must take its feedback into account, hold additional public hearings, and then pass a final map without any outside approval needed. The deadline when the final maps are due is December 7.

With little time left till that deadline, Citizens Union, a good government group, urged the Commission to quickly resolve any lingering issues so that the maps can be scrutinized by the public. "Today’s vote demonstrates the need for transparency throughout the process," said Betsy Gotbaum, CU's executive director, in a statement. "Opening the Commission’s deliberations to the public would have allowed all commissioners to weigh in on the issues that led to today's surprise vote. The Commission should hold its next deliberations in public to prompt healthy dialogue between commissioners. This act will reduce the potential power of outside influence on the process."

Walcott said the Commission will “reconvene to discuss our next steps” in the process. “Then we will go through the process of addressing any of the concerns because we still have a responsibility to submit these plans to the City Council for their review,” he said.