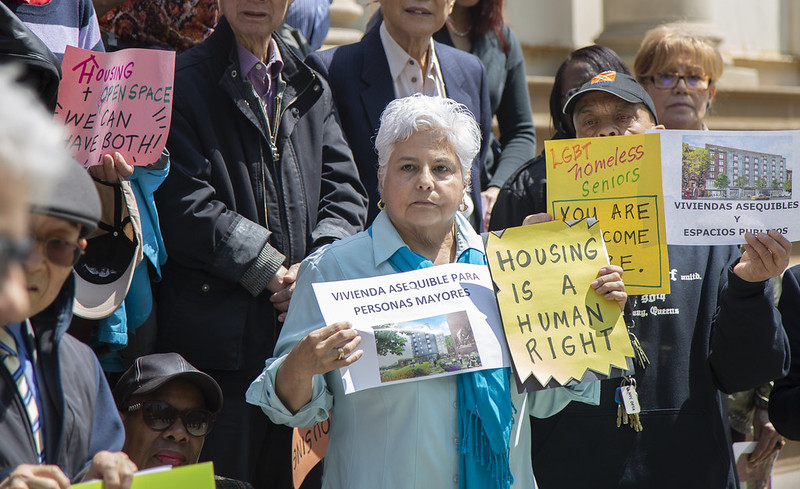 Older New Yorkers, aged 65 and above, are the fastest growing age group in the city, currently numbering at about 1.24 million and expected to grow to as many as 1.4 million residents by 2040. They are also a population that experiences significant housing insecurity and other housing challenges, with more than half considered rent-burdened. As the city continues to grapple with a deepening affordable housing crisis, City Council members on Monday sought answers from Mayor Eric Adams’ administration about efforts to support and prioritize older individuals in the city’s housing plan.

At a joint hearing of the Council’s Committee on Aging and Committee on Housing and Buildings, Council members pressed administration officials on affordable housing production and availability for seniors, support against evictions and rent increases, efforts to make housing more accessible, particularly for seniors with disabilities, and more.

“As we continue to govern with the resources of our great city, we must do more, better, faster, not less, slower or in more cumbersome ways,” said Council Member Pierina Sanchez, a Bronx Democrat who chairs the housing committee. “One area in which this is resoundingly clear…is with respect to housing our older adult population, New Yorkers who at times are most vulnerable and face some of the greatest obstacles to accessing even the resources that presently exist.”

Mayor Adams has committed to a major course correction on housing with his plan, “Housing Our Neighbors,” which seeks to align previously separate efforts on homelessness, public housing, and overall affordable housing production under one umbrella. It includes several planks focused on senior housing, and an overarching theme of trying to make government work better to make access to housing easier and more efficient. But when he released the plan, he refused to set a broad target for housing creation, insisting that he be judged on the vague metric of “as many people as possible to get into housing” during his tenure.

The mayor faces some headwinds as the recently released Mayor’s Management Report, which covers the 2022 fiscal year that ended June 30, showed affordable housing creation dip 45% from the previous year. “We are slowing production. We're going in the wrong direction,” Sanchez said at the hearing. “Our seniors need homes that are safe and affordable in order to live healthy lives and safely.”

The crisis is even greater for older New Yorkers of color, who are more likely to be housing insecure than older white New Yorkers. “New York City has a long history of residential segregation, and disinvestment in neighborhoods of color, which has left many older New Yorkers of color without the supports needed to age healthily including affordable housing, social support, safety, accessible public transportation and health care,” said Council Member Crystal Hudson, a Brooklyn Democrat who chairs the aging committee, in her opening remarks. “With its high density, urban population, ethnic and racial diversity, and increasing longevity, the city must account for the unique needs of the older adult population.”

The mayor’s housing plan does include several measures to help seniors access affordable housing and remain in their homes, which officials outlined at the hearing. But they struggled to provide specific targets for creating affordable housing dedicated to seniors or to accurately account for the pressures of housing insecurity that seniors face.

The city’s programs for seniors are spearheaded by the Department for the Aging (DFTA), which provides direct social support while also working with other agencies and offices to provide other services such as protection against against eviction and discrimination. The city has also created a Cabinet for Older New Yorkers, which met for the first time on September 21.

“This first of its kind multi-agency collaborative was created to support services, projects, and policies benefiting older adults across New York City with a primary objective to create an age-inclusive New York City,” said Michael Ognibene, first deputy commissioner and COO at DFTA. He promised that when the cabinet produces its report by June of next year, it will ultimately include housing support for seniors.

“Supporting older adults is a top priority for the administration,” said Lucy Joffe, assistant commissioner for housing policy at the city’s Department of Housing Preservation and Development (HPD), at the hearing.

Joffe pointed to several targeted housing programs for seniors such as the Housing Ambassador program to help older adults navigate the city’s affordable housing lottery, the Senior Citizen Rent Increase Exemption (SCRIE) program to freeze rents for eligible seniors living in rent-regulated housing, the Aging in Place initiative to provide free home modifications to seniors for their health and safety, among others. As part of the housing plan, the administration is working to expand eligibility for those programs, while also accelerating the production of more supportive housing that can help seniors transitioning out of homelessness and those with ongoing medical and social services needs.

Sanchez, however, pressed her concerns about the slowdown in affordable housing production, which Joffe attempted to rationalize, echoing the mayor’s sentiments from when he released his housing plan. “We are committing to building and preserving as much affordable housing as we can,” Joffe said, “but we're in the midst of a refocusing on the people that we are serving, reducing administrative burdens to speed New Yorkers’ access to our programs and a real focus on how we can best serve them over unit counting.”

When asked about how annual production of senior housing compares with the overall need in the city, Joffe did not offer a direct response. “We don't have individual program specific targets,” she said. “But we will be reporting out through the MMR on our production, including on our senior housing production, including on all of the various ways that we're going to serve older New Yorkers.”

“I must say it's a little alarming to not have a goal when 1 million New Yorkers are older adults and only growing,” Sanchez said. “We have to be intentional about how we are responding to the crisis for older adults in New York City.”

The officials did identify challenges in the city building more affordable housing specifically for seniors. Between 2020-2023, HPD’s capital commitment plan allocates $508.3 million to build 1,000 units of senior affordable housing each year, or roughly $508,000 per unit. But those costs are rising because of inflation, supply chain disruptions and interest rates increases. The costs also vary from project to project depending on the different programs under which HPD allocates the money, either through low-interest loans or direct subsidies to developers.

Hudson sought to identify the number of seniors displaced by gentrification pressures in the city over the last five years, but the administration had no clear answer. “Unfortunately, tracking this on an individual level would be incredibly difficult,” said Joffe, noting that the city could only track formal notices of eviction but not cases where a senior may be unable or refuse to resign a lease because of rent increases. She did say, however, that the city is working to improve the annual housing survey to better understand patterns of displacement and improve its services.

The hearing also delved into several pieces of proposed legislation and a resolution to support the housing needs of seniors, particularly those with disabilities. The bills — introduced by Council Members Hudson, Diana Ayala, and Justin Brannan, and Public Advocate Jumaane Williams — would require reporting on affordable housing set-asides for tenants with disabilities; require that tenants with disabilities facing eviction be given information on legal services; require reporting on patterns of discrimination against such tenants; require a percentage of housing units in developments that receive city financial assistance to be universal design units and therefore accessible; and more.

The resolution, introduced by Council Member Tiffany Cabán, urges the State Legislature to approve a bill that would automatically enroll eligible seniors in the existing SCRIE program rather than requiring them to sign up. “We owe it to our older neighbors who live with constrained incomes to protect them from rent hikes imposed by profit thirsty landlords,” she said at the hearing.