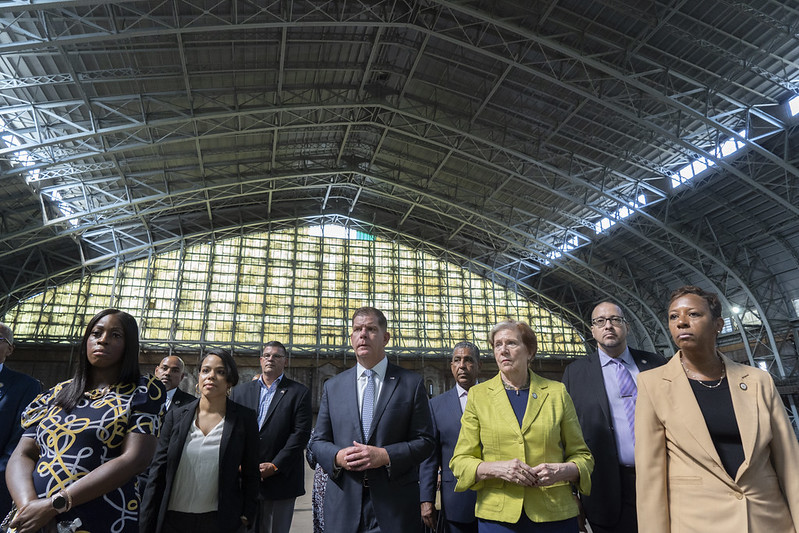 The Kingsbridge Armory, the largest of its kind in the world at 520,000 square-feet, has sat vacant for more than three decades as plans to redevelop the structure have repeatedly failed. But the city is undertaking yet another attempt to reenvision the armory for modern use, and local lawmakers are optimistic that this time they will succeed.

Built in 1917 for the New York National Guard, the armory had been used for myriad purposes until it was decommissioned in 1991 and then given over to the city in 1996. But the armory, occupying an entire city block between Jerome Avenue and Reservoir Avenue in the Kingsbridge neighborhood of the Bronx, is a complicated site to redevelop. It was designated a city landmark in 1974 and then listed on the National Register of Historic Places in 1982.

Over the years, the city has proposed various uses for the space, which includes a 180,000-square-foot column-free drill hall, five garage units, and 120-foot ceilings roughly as tall as an 11-story apartment building. Mayor Michael Bloomberg tried to convert the armory into a retail mall, a plan that was shot down by the City Council in December 2009 in a near-unanimous vote, chiefly over concerns that the project failed to require “living wage” job provisions for the developer. Bloomberg vetoed the Council’s vote but was overridden.

The last proposal, first announced by Bloomberg in 2013, involved turning the armory into the world’s largest ice rink facility, the Kingsbridge National Ice Center (KNIC), a 750,000-square-foot complex with nine indoor regulation-size ice rinks, 5,000 seats and 50,000 square feet of space for community use. The plan was estimated to create about 180 permanent jobs and 890 construction jobs.

The KNIC plan was unanimously approved by the City Planning Commission and then passed by the City Council in a 48-1 vote in 2013, as the mayor’s third and final term wound down, as well as the terms for many City Council members.

Over the years, however, the project stalled as the city’s development partner, KNIC LLC, which included former New York Rangers star hockey player Mark Messier, failed to obtain sufficient capital to fund it. In 2016, seeking to galvanize the project, the state’s Public Authorities Control Board approved a $30 million loan from the Empire State Development Corporation to KNIC to begin construction on the first phase of the project. In 2017, then-Governor Andrew Cuomo announced another $108 million loan to the project in his State of the State address.

Questions about transfer of the lease for the armory from the city to the development group became a contentious affair among the group, Cuomo, and then-Bronx Borough President Ruben Diaz Jr on one side and then-Mayor Bill de Blasio and city entities on the other.

In December 2021, the plan finally fell through and the city ended its contract with KNIC LLC, after a lengthy court battle that ended with a judge ordering that the armory’s lease would remain with the city’s Economic Development Corporation.

Now the city is taking up the task of another community engagement process to determine how to overhaul and rehabilitate the armory more than a hundred years after it was built. The effort comes on the heels of the controversial redevelopment of the Bedford Union Armory in Brooklyn, a mixed-use project redeveloped by the real estate firm BFC Partners, with 415 units of housing and a 60,000-square-foot community center that opened last October.

Earlier this year, City Council Speaker Adrienne Adams and City Council Member Pierina Sanchez, whose district includes the armory, set aside $5 million for initial renovations on the structure. The state also re-appropriated the $108 million in this year’s budget for any potential future redevelopment of the armory, the governor’s office confirmed.

“There have never been successful conversations about the permanent uses [of the armory], uses that will serve the community,” said Sanchez, a former urban planner who is just over nine months into her Council tenure, in a phone interview. Sanchez is co-chairing a community working group, along with Sandra Lobo, executive director of Northwest Bronx Community and Clergy Coalition, to oversee a six-month community visioning process along with the EDC.

The next project will also likely need to go through the city’s lengthy Uniform Land Use Review Procedure (ULURP), which only starts once there's a project plan and, if needed, private partners on board.

“The hope for the armory is a space that is really a driver of economic development for the community,” Sanchez said, “that is bringing good jobs, local hire…could be business, could be other kinds of uses that are responsive to the community and are going to be helping to build wealth and health in the community.”

Sanchez wants to oversee a robust community engagement process, supported by technical assistance from the city, and a strong community benefits agreement like the one that was included in the KNIC proposal, which would have provided living wage jobs for all employees, 51% of jobs and contracts reserved for Bronx residents, 51% of contracts for Minority and/or Women Owned Businesses, a Green Action Plan to improve the environmental impact of the project, free access to ice rinks for Bronx Title 1 schools and community groups, a small business technical assistance fund, among other things.

“That's the floor, not the ceiling,” Sanchez said. “That’s the floor in these discussions. Community is at the center.”

As Sanchez noted, the armory is often considered as a space for emergency uses, including recently as the city has experienced an influx of thousands of migrant asylum seekers, burdening the already struggling shelter system. But she said the armory has hazards that make it unfit for those uses, including potential lead and asbestos contamination. The Council’s $5 million allocation is meant to remediate those immediate concerns.

“It's a downpayment on addressing some of those environmental hazards and concerns so that the community can actually access the space and be a part of the visioning process,” she said. “I will yell at the top of my lungs to get as much more funding as I can from the city side of things.”

“We are excited to learn more about the community’s priorities for the Kingsbridge Armory,” said an EDC spokesperson in a statement to Gotham Gazette. “As New York City continues its recovery from the pandemic, redevelopment of the Armory can support outer-borough economic development, bringing new investment, good-paying jobs, and overall benefits to the neighborhood, the Bronx, and the city at large.  We look forward to an open conversation with community members so the new Kingsbridge Armory becomes an asset every Bronxite can feel proud of.”

The mayor’s office did not respond to a request for comment for this story.

“We don't know how much subsidy dollars beyond what we have today we will be able to secure,” Sanchez said. “These are political processes and budgetary processes…So us local members who represent the community and represent the armory are going to be fighting but it's not guaranteed.”

Espaillat's office did not reply to multiple requests for comment for this story. Walsh's office acknowledged an inquiry but did not provide comment.

State Senator Gustavo Rivera, whose district includes the armory, supported the previous KNIC proposal because of its strong community benefits agreement, and wants something similar for any new redevelopment project. “What's important and has always been important for me is what is at the core of it, and that is…it has to be driven by community needs and community wants,” he said in a phone interview.

“There is a consensus amongst all of us that we need to actually bring together state resources, city resources, and national resources to actually make this into a reality, to make it into a viable economic engine for this community,” he added. “We are working in concert in ways that has not necessarily happened before so I'm quite excited about what the possibilities will bring in the next couple years.”

As Borough President Gibson, a former State Assembly and City Council member who took her current office in January, noted in a phone interview, the current zoning of the area does not allow either building a school or housing. While that zoning could be changed through the city's land use review process, under the current restrictions, Gibson said she would ideally like to see multiple uses for the space including a community recreation center, a health care center, space for businesses (for instance the tech and video gaming industries), and potentially coworking space for entrepreneurs, small businesses, and worker cooperatives. Crucially, the new project should generate revenue for the city, she said.

“We're not waiting, because time is of the essence,” she said. “We have money that's been allocated, money that's already designated from the state and we want to make sure that that money doesn't go away.”

Gibson said the failure of the KNIC project also served as a lesson for local elected officials. “We're going to learn from the past mistakes, and we're going to do things different and better,” she said. The ice center project wasn’t necessarily the best use of the space, she said, but rather just the best proposal at the time.