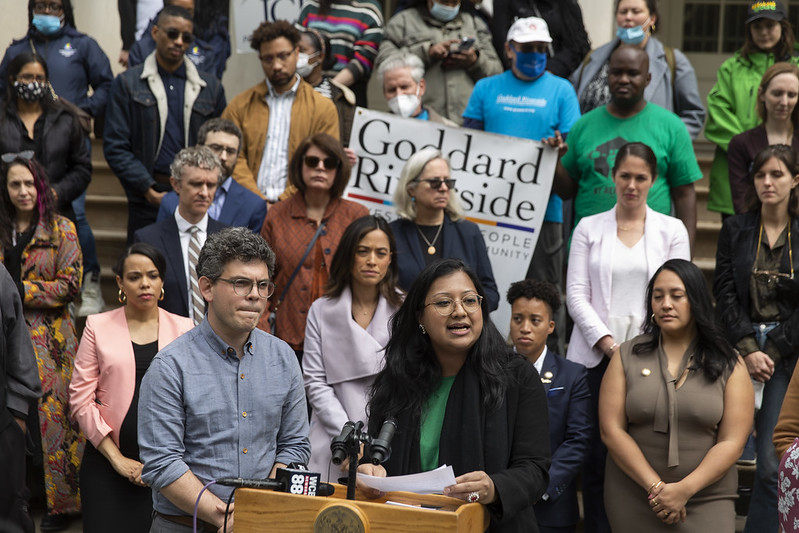 The Progressive Caucus’ membership, all Democrats, is the largest it has ever been in the 51-member City Council, with 35 members in its ranks, including Speaker Adrienne Adams as an ex-officio member, up from 12 members when it was first created in 2010.

The Caucus’ influence in the Council has grown over the years. In 2014, it was instrumental in selecting Melissa Mark-Viverito, one of its founding members, as the Council Speaker, an immensely powerful position in forging the city’s legislative and budget agendas. Though its power has ebbed and flowed in the years since, seeing some high-profile defections at times, it now boasts a majority that, if cohesive, could even override a mayoral veto.

But the new agenda is ambitious and just because the caucus has such numbers does not mean that the full package of legislation is by any means a slam-dunk. There is a fair share of political diversity in the Progressive Caucus, and not all members are as far left-leaning as others. And Mayor Eric Adams, a moderate Democrat who has already clashed with the Council and its Progressive Caucus on several fronts, may be especially unwelcoming of several pieces of the agenda, having already expressed opposition to the top priority, a ban on solitary confinement in city jails.

“Working-class New Yorkers, immigrant New Yorkers, and Black and brown New Yorkers are buckling under the weight of multiple intersecting crises in our City,” said Council Member Shahana Hanif, who co-chairs the Progressive Caucus with fellow Brooklyn Council Member Lincoln Restler, in a statement. “They are demanding a real comprehensive response from their City government, and where the Mayor is failing to act, the Council will step in.”

“The time is ripe for a bold progressive agenda to take hold in this Council that addresses economic justice, racial justice, criminal justice, environmental justice, housing justice, and more,” Restler said in a phone interview.

“With an unprecedented number of Progressive Caucus members together representing a veto-proof majority in the Council, we have the power to advance and enact the policies that New Yorkers are clamoring for and that we were elected to implement,” he added.

The 20 pieces of legislation in the Caucus’ 2023 agenda have all already been introduced before the Council, and several set up clear battles with the mayor.

At the top of the agenda is the proposal to ban solitary confinement in city jails, introduced by Public Advocate and former Council Member Jumaane Williams and Council Member Carlina Rivera, who chairs the Committee on Criminal Justice. Though former Mayor Bill de Blasio, under pressure from the Council and criminal justice advocates, took steps towards reforming the practice, Mayor Adams came into office pledging to retain the use of what he calls “punitive segregation.”

While the mayor has called such tactics essential for protecting both detainees and correction officers, his administration is facing widespread criticism and calls for a federal takeover of the jails given that 17 detainees have died this year, some of whom have been in solitary confinement.

“We are laser-focused on ending this torturous policy in our own city jails,” Restler said.

The second proposal on the agenda, introduced by introduced by Council Member Keith Powers of Manhattan, is the Fair Chance for Housing Act, which would prohibit housing discrimination on the basis of arrest record or criminal history. According to a release from Powers’ office, citing a study by John Jay College’s Data Collaborative for Justice, there were nearly 750,000 New York City residents with a conviction history in 2019, almost 11% of the city’s adult population. Under current law, landlords and brokers can deny housing to those individuals, who are also ten times more likely to become homeless than the general population.

“New Yorkers who have paid their debts still experience severe discrimination, no matter how minor the offense or how long ago,” Powers said in a statement in August, when he introduced the bill. “The Fair Chance for Housing Act will finally give these folks a place to sleep a night—and the opportunity to rebuild their lives.”

Two other bills, also introduced by Council Member Powers, would require reporting by the city on its bank deposits and use of non-depository city financial services, with the aim of establishing a New York City Public Bank. But that would first require approval from the state Legislature, where a public bank proposal has languished for years.

The “Progressive Agenda” includes six bills that would require greater transparency from the NYPD, which has traditionally been resistant to most attempts at greater oversight by the Council. They include proposals to mandate reporting on use of force incidents involving an NYPD motor vehicle; banning the department from deploying the Strategic Response Group, a counterterrorism squad, to nonviolent protests; requiring monthly reports from the NYPD on complaints of police misconduct; requiring the department to report on instances where an individual denied an officer consent to a search; requiring reporting on police-civilian investigative encounters; and abolishing the gang database. Lead sponsors of the bills include Council Members Crystal Hudson, Chi Ossé, Tiffany Cabán, Alexa Avilés, Althea Stevens, Rivera, and Public Advocate Williams.

“The vision of the Caucus is to put together different packages of legislation that we feel will be transformative for New York City,” said Manhattan Council Member Carmen De La Rosa, co-vice chair of the Caucus, in a phone interview.

“When you look across the board, what these bills seek to address, they’re systemic, historic issues that our communities have been dealing with and viable solutions for those issues,” she added.

Restler expects that many of the bills will receive pushback from Mayor Adams. “The mayor’s all over the place,” he said. “What I know is that this is the most progressive Council that has ever been elected in New York City, and that when we are organized as a caucus, that we can and will get transformative pieces of legislation through the finish line.”

Under de Blasio, who was decidedly more progressive than his successor, the Progressive Caucus had a closer ally on legislative priorities, though the two sides of City Hall clashed nonetheless on issues like NYPD reform. With Adams, the Caucus finds itself pursuing its original mission in the Bloomberg years of pushing leftward a more centrist ideology in the Mayor’s Office. “It's the role of the Council to counterbalance what is coming out of the administration,” De La Rosa said. “So this is our opportunity to fight back on behalf of the communities we represent.”

What’s not lost on Restler is that the entire Council is yet again on the ballot next year, with June primaries barely 18 months after dozens of new members were seated, because of the decennial Census and redistricting cycle. Many of the Caucus members are first-timers on the Council, giving the legislative agenda that much more urgency.

“I certainly think that a four-year term is a more sensible timeframe to give elected officials the opportunity to fully focus on legislating and serving their communities rather than in constant election mode,” Restler said. “As a predominantly newly-elected body, we need to show real results to our constituents in advance of next year's election. And this is a package that I believe my colleagues and I can proudly run on in our reelection campaigns if we can get these pieces of legislation across the finish line.”

Another five bills in the agenda, the Zero Waste legislative package, aim to codify and achieve the city’s goal of sending zero waste to landfills by 2030, which was first set by Mayor de Blasio in 2015 but is far behind schedule. Among the proposals are a citywide curbside organics program for residential buildings, enshrining the zero waste by 2030 goal into law, requiring regular reporting on progress towards that goal, and mandating that the Department of Sanitation establish at least one community recycling center and three organics drop-off sites in each community district.

Though Speaker Adams is technically a member of the Caucus, and she has embraced many of the proposals including the zero waste package and the solitary confinement ban, she has not yet endorsed the entire agenda. “I think she is a natural ally for the caucus in helping to make this happen,” Restler said.

Three other bills aim to create and expand access to permanently affordable housing in the city. They include the Community Opportunity to Purchase Act, introduced by Council Member Rivera, which would give nonprofit and community housing developers a right of first refusal on purchasing certain residential properties; the Public Land for Public Good Act, introduced by Restler, which would give nonprofit developers and community land trusts priority when the city sells public land for affordable housing; and a bill introduced by Council Member Gale Brewer that would establish a Land Bank to acquire, warehouse, and transfer property to develop, rehabilitate, and preserve affordable housing.

Building on previous efforts to expand paid sick leave, the agenda includes a bill introduced by Council Member Hanif that would extend the benefits of the Earned Safe and Sick Time Act to gig workers under certain conditions.

The Progressive Caucus — including its director, Emily Mayer, who was hired in June to help guide and organize the large and mostly-new group — and a number of allies including Public Advocate Williams, Legal Aid Society, and other groups will hold a press conference on Thursday at noon outside City Hall to formally unveil the agenda.