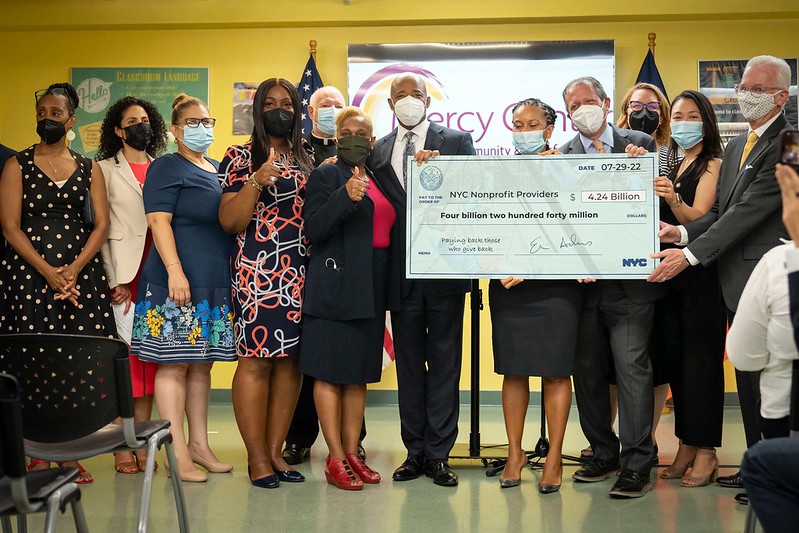 In the October 19 letter, Lander asked Adams to convene the Procurement Policy Board (PPB) to take steps to increase contract procurement for minority- and women-owned businesses (MWBEs) and address "corruption vulnerabilities" exposed in a Department of Investigation report released late last year, shortly before Adams took office. Those include few controls on contractors' conflicts of interest and executive compensation, and gaps in spending documentation and review.

Adams and Lander, both Brooklyn Democrats newly-elected to their citywide positions, have already worked together on addressing other long-standing problems in city contracting, particularly timely payment to nonprofit contractors.

"Despite procurement being the vehicle for the City's essential services from sheltering the homeless to feeding seniors, procurement reform often falls to the bottom of the priority list," Lander said in a statement to Gotham Gazette.

"The vast majority of human services vendors are well above board and go beyond to serve New Yorkers," he said. "But in order to provide the best services, our vendors should reflect the diversity of this city and our reforms must be able to weed out the occasional bad actor.”

The five-member Procurement Policy Board is appointed jointly by the mayor and comptroller, who both may hire and fire members at will. It is responsible for setting out rules related to soliciting bids and awarding and administering contracts. In a statement to Gotham Gazette, a spokesperson for Mayor Adams indicated that the mayor is open to working with the comptroller and Procurement Policy Board on reforms.

On October 6, Governor Kathy Hochul signed legislation to allow the PPB to double the level at which the city can contract with MWBEs outside of the competitive bidding process, raising the threshold from $500,000 to $1 million. In his letter to Adams, Lander said it was "imperative" that the PPB meet to raise the threshold, noting that previous increases have raised the average size of MWBE contracts and created more opportunities for those firms to get city business.

The number of non-competitive MWBE city contracts fell nearly 30%, from 1,242 in fiscal year 2020 to 870 in fiscal year 2021, a value of close to $8 million, according to the comptroller's Annual Contracts Report.

"This will not only reduce barriers, but also help increase the volume and value of meaningful contracting opportunities for M/WBE firms," Lander wrote of raising the threshold.

Asked what measures were in place to prevent misuse of these funds or ensure the city is paying for the best available services, a spokesperson for the Comptroller's Office, which shared the letter with Gotham Gazette, said city agencies are responsible for vendor oversight. While contracts under $100,000 do not need to be sent to the comptroller, the office may audit the spending, the spokesperson said.

Lander also called on the administration to agree to promulgate rules to crack down on opportunities for corruption, fraud, and nepotism in nonprofit human services contracting and subcontracting.

In fiscal year 2021, New York City spent $12 billion on human services contracts, accounting for roughly 40% of the city's total contracting. The Department of Investigation report published last November found the city had persistent gaps in its contract award and oversight system that made these funds susceptible to misuse.

In one notable example in 2015, the state Attorney General, following a DOI investigation and referral, reached an $800,000 settlement with a Bronx nonprofit that had diverted funds from services for the elderly to its real estate holdings.

Many of the actions Lander is calling for echo recommendations made in the DOI report. Specifically, Lander called on the mayor, through the PPB, to adopt anti-nepotism rules for contractors and prevent nonprofit providers from subcontracting with businesses owned or controlled by relatives. His letter suggests requiring conflicts of interest disclosures or certifications within the competitive bidding process.

According to the DOI report, the agency has "repeatedly identified instances of employees providing services on City contracts who are supervised by family members apparently without the knowledge and authorization of the funding City agency, in violation of the Standard Contract." In the course of its investigations, DOI has identified these with vendors contracted by the Administration for Children's Services, Department for the Aging, Department of Youth and Community Development, the city Health Department, and the Department of Social Services – all agencies that spend a significant portion of their budget on contract services.

The comptroller's office also wants to require all city contractors and subcontractors, both for- and not-for-profit, disclose more information about the compensation and demographic make-up of their employees and leadership. Doing so could raise early flags for potential misuse of funds and encourage companies to hire more candidates who are Black or women, and other racial and gender backgrounds.

Specifically, the letter called for the PPB to require contractors and subcontractors to disclose the compensation of executive directors and chief operating officers, compensation of full time employees, federally-required reporting on workforce demographic data, and a "board matrix" outlining the racial, ethnic, and gender make-up of board members. That disclosure should be published in downloadable datasets on the city's open data portal, the letter said.

Outside of the PPB that he and Adams jointly control, Lander called on the mayor to seek state approval to limit the compensation of executives at nonprofits that may do business with the city. In line with the DOI recommendations, Lander said this should be capped at the highest salary paid to a public sector employee – currently pegged at $699,081, the salary of New York City Health and Hospitals President Mitch Katz, in the last fiscal year. Such a cap would require legislation in Albany.

"Payment of excessive executive compensation is an important issue because, where it does occur, it is often linked to other types of fraud and waste of public services," reads a passage of the DOI report cited in the comptroller's letter to Adams.

The letter noted that what controls are in place "are extremely limited in scope and inconsistently applied."

“The mayor has been focused since Day 1 on ensuring our procurement process is fair, transparent, efficient, and accountable," said Adams spokesperson Jonah Allon, in a statement to Gotham Gazette. "Through our Joint Task Force to Get Nonprofits Paid on Time and the Capital Process Reform Task Force, both of which have involved close coordination with the comptroller’s office, the administration has already made meaningful strides to streamline processes while maintaining appropriate oversights to ensure every entity that contracts with the city is spending taxpayer dollars wisely. We look forward to advancing additional steps through the Procurement Policy Board, and thank the comptroller for his continued partnership.”