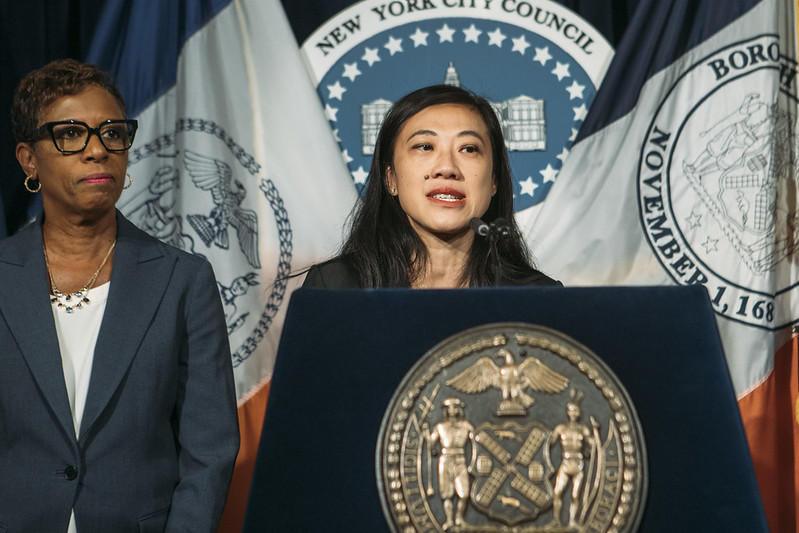 The New York City Council on Wednesday passed a bill that would codify the city’s Public Service Corps program, which offers undergraduate and graduate students paid internships at city agencies to introduce them to careers in civil service. The bill, and accompanying legislation, are aimed at recruiting more diverse young people into the city’s workforce.

Intro. 698, sponsored by City Council Member Sandra Ung, a Queens Democrat, would establish into law the Public Service Corps Program, which was first launched in 1966 and is administered by the Department of Citywide Administrative Services (DCAS), which hires and trains city employees. The program offers paid work-study internships and academic internships to qualifying students from both public and private universities. The bill also requires DCAS to try to recruit students from diverse backgrounds for a wide range of city agencies and submit an annual report on the program.

The bill was approved Wednesday by the Council’s Committee on Governmental Operations, which Ung chairs, before heading to a vote by the full City Council that afternoon, where it also passed.

“We should be making every effort we can to recruit the best and brightest students across the five boroughs to work for the City of New York, and that begins by giving them the opportunity to experience working in city government through internships at a broad range of city agencies,” Council Member Ung said in a statement to Gotham Gazette. “My bill to codify the Public Service Corps within the Department of Citywide Administrative Services will allow us to review the city’s recruitment efforts and the effectiveness of the program, including ensuring that we are attracting students from a diverse range of backgrounds. Through the Public Service Corps, we can identify and develop the people that will become the future leaders of this city.”

Mayor Eric Adams’ administration has indicated support for the bill. “For more than 50 years, we have successfully managed our own Public Service Corps, and we are committed to working with the City Council to fine tune this bill and introduce a new generation of New Yorkers to careers in civil service,” said Barbara Dannenberg, DCAS’ Deputy Commissioner for Human Capital, at an October 26 hearing on the bill.

According to Dannenberg, roughly two dozen city agencies are currently participating in the program and over the last five years nearly 3,400 interns at various stages of school have worked at agencies through the program. The city’s largest partner in the program is the CUNY system, she said, though she did not provide numbers. When asked, she could not provide exact numbers on demographics of the program but she said interns are majority female, over 60%, and majority non-white, over 70%.

“They may be freshmen, they may be sophomores, they may be folks who are not really sure where they want to be in their career so the city provides these opportunities for them to get this work experience and hopefully it's a wonderfully positive experience that they will want to come to work for the city once they’ve completed their schooling,” she said.

Though thousands of students have received internships through the program, participation plummeted in the 2020-2021 school year, with only about 34 interns availing themselves of the program, Ung noted at that hearing. Dannenberg acknowledged that the dropoff was largely caused by the pandemic and participation has slowly increased, with 89 interns working at agencies in recent months. “[W]e definitely saw a downturn in the number of students who were interested in this program due to the pandemic. I definitely think that that was the largest factor,” she said.

Ung’s bill comes at a time when the city faces a vacancy crisis at city agencies that has hampered many crucial services. With the city workforce down roughly 19,000 full-time employees since 2020, Adams has faced questions about personnel management. The first-year mayor had budgeted for an additional 25,000 employees this fiscal year, an unrealistic number, and has told agencies to eliminate about 4,700 budgeted vacant civilian positions. While Adams has said the move is about right-sizing hiring and carefully managing the city budget, he has yet to announce promised measures to improve city employee retention and recruitment.

“The goal of this bill is to create a pipeline of students from a variety of backgrounds that are ready and able to fill civil service positions upon the completion of their degree,” Ung said at the hearing. “I’m hopeful that this bill…will help fill the many agency job vacancies with a diverse pool of well-qualified employees that may not have traditionally considered civil service careers.”

The Public Service Corps program isn’t the only channel for youth to enter into city government internships, jobs, and civil service careers. DCAS also runs the Urban Fellows Program, a nine-month fellowship where college seniors and recent graduates work in mayoral offices and agencies to learn about and help implement public policy. Additionally, the Department of Youth and Community Development administers the Summer Youth Employment Program, providing youth between the ages of 14 and 24 summer jobs. Under Mayor Adams and the City Council, the program was expanded to 90,000 slots this year, the largest it has ever been.

Along with Ung’s legislation, the Council’s Committee on Civil Service and Labor passed a separate bill on Wednesday, sponsored by Council Member Carmen De La Rosa, a Manhattan Democrat who chairs that committee, to create a civil service ambassador program. Through the program, the city would conduct education and outreach initiatives on joining the civil service and taking civil service exams.

And, on a separate issue at the Government Operations hearing, the committee then full Council passed another bill sponsored by Ung which will simplify ballot instructions for ranked-choice voting elections and improve the layout of ranked choice ballots.

Note: this article has been updated to reflect that all three bills mentioned were passed by the City Council shortly after this article was first published.