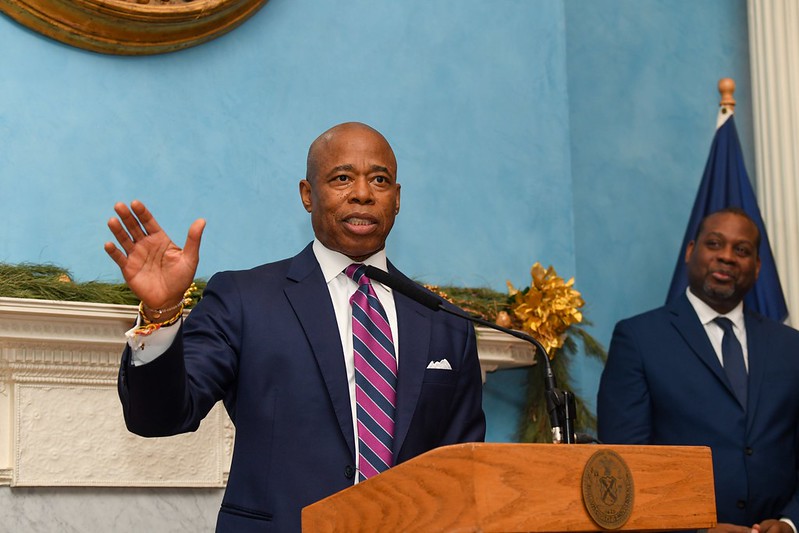 Mayor Eric Adams announced last month the creation of a new office consolidating the city’s various civic engagement bodies, as part of his ongoing effort to streamline the functions of city government and, he said, to more actively engage the public in civic life.

The mayor’s new Office of Engagement, led by newly-appointed Chief Engagement Officer Betsy MacLean, now oversees various city entities that interact with New Yorkers to encourage their participation in government and politics: the mayor’s Community Affairs Unit (CAU) and Public Engagement Unit (PEU); NYC Service, the city’s volunteer service corps; and the charter-mandated Civic Engagement Commission (CEC). The CEC, which was created through a 2018 charter revision commission, also has purview over DemocracyNYC, the office created by Mayor Bill de Blasio that same year to improve voter participation and electoral access in the city and now falls under MacLean’s umbrella.

“Community engagement is a core pillar of this administration. We are committed to ensuring that New Yorkers have the tools they need to better engage with government and access its benefits, but to also do it in a more streamlined, simple-to-use manner,” Adams said in a statement announcing the new office on December 13. “The newly created Office of Engagement will ensure that we continue to collaborate, coordinate, and prioritize engagement across all agencies and that New Yorkers have a say in our policies, priorities, and resources.”

“From my decades of experience working with residents throughout our city and beyond, I know that community engagement is not a photo op or a box to check,” MacLean said in a statement on her appointment. “It is deep partnership, consensus building, power sharing, and paradigm shifting. And when we do it right, this kind of inclusive democracy builds community power, brings us closer together, and results in better policies and better outcomes.”

Adams has sought to restructure and make city government more efficient in several ways as he follows through on a campaign promise to fix a municipal government he has often called dysfunctional. Similar to the new engagement office, he consolidated the city’s technology agencies into a new office, did the same with environmental agencies, placed most public safety agencies under a new deputy mayor, Philip Banks, and created a new chief efficiency officer, appointing Melanie La Rocca to the post. It is not yet clear how much impact on efficiency and effectiveness Adams’ efforts have had.

As part of the announcement last month, Adams also appointed a new Chief Democracy Officer, Kathleen Daniel, who was previously director of community engagement for the city’s contact-tracing program during the pandemic and field director for the city’s 2020 Census outreach before that. The mayor also reappointed Adrienne Lever as executive director of the PEU, Laura Rog as chief service officer at NYC Service, and Dr. Sarah Sayeed as chair and executive director of the CEC.

“Hopefully by bringing all of these different engagement units under the direction of one office, they can combine their various efforts, truly be more inclusive, and make residents understand that their priorities are also a priority at all levels of government and in our city agencies,” said Queens City Council Member Sandra Ung, chair of the Committee on Governmental Operations, which has oversight of at least some of these entities, in a statement.

Ung noted that the city hasn’t always performed its role well in engaging the many diverse communities across the five boroughs, particularly in immigrant neighborhoods. “Historically, the city has had a poor track record of engagement and true interaction with many of our residents, especially in immigrant communities where English is not the first language spoken by many of them,” she said, touching on some of the purpose of the Civic Engagement Commission and its mandate coming out of the charter revision commission process that created it.

“They might see their elected officials making appearances in their community, especially around election time, but they don’t feel like they have a meaningful role to play in shaping the future of their communities as it fits into broader citywide policy,” she added. “I think this is evident in the low voter turnout you see at the polls, even among the electorate in non-immigrant communities.”

Indeed, Adams’ announcement comes after another set of low turnout elections among New Yorkers, from the 2021 municipal election to the 2022 state and federal elections. While streamlining the city’s engagement efforts could prove more efficient and effective, it is unlikely to make a major impact on voter turnout.

“Joining different city agencies intended to improve civic participation under one roof could prove beneficial, as there was some overlap between these bodies,” said Ben Weinberg, director of public policy at Citizens Union, a good government group focused in part on civic participation. “The City suffers from very low voter turnout rates, but effective engagement efforts can lead to greater participation, as we saw in the recent Council redistricting process and the 2020 Census campaign.”

“However, the Civic Engagement Commission has crucial, charter-mandated tasks that should be done independently of the Mayor’s Office,” Weinberg noted in caution, “like assisting voters at polling sites and providing technical support to community boards, local bodies which are often at odds with City Hall.”

In a similar vein, Adams' directive does not even touch on the New York City Board of Elections or the New York City Campaign Finance Board and its NYC Votes program, which also do voter engagement but are independently-run.