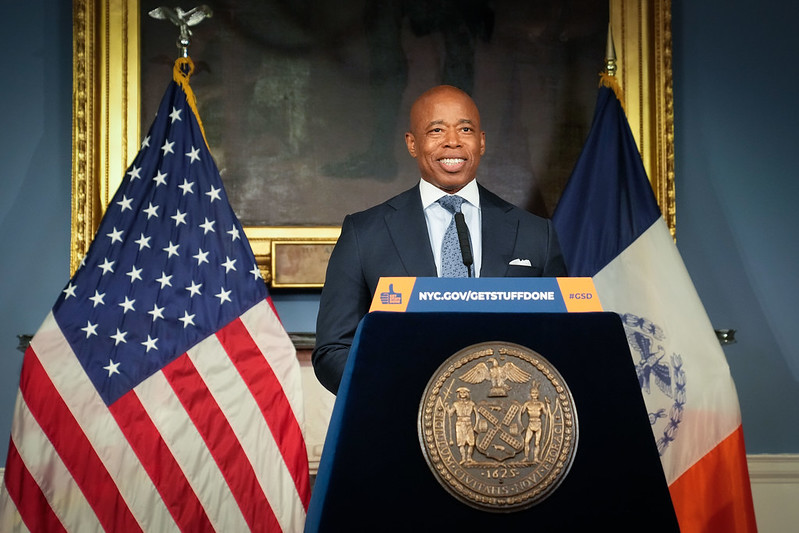 Mayor Eric Adams on Thursday released an $102.7 billion preliminary budget for the 2024 fiscal year, which begins July 1, stressing the importance of careful spending and good fiscal management amid a variety of uncertainties and challenges.

The mayor’s latest budget proposal is up $1.7 billion from the $101 billion budget that was adopted in June 2022 for the current fiscal year and down $1.3 billion from the latest budget modification in November, which projected $104 billion in spending by the end of the current fiscal year. At least some of the fluctuation relates to federal aid to the city. While Adams focused first and foremost on restraint, savings, and uncertainties in the city’s fiscal picture, he also touted ongoing and increasing investments in affordable housing and tenant protection, education equity, sanitation services, and climate efforts.

“Since day one, fiscal discipline has been the hallmark of this administration,” Adams said in his presentation from City Hall. “We are focused on governing efficiently and measuring success not by how much we spend, but by our achievements. This budget protects funding for the essential services that continue to keep the city safe and clean, driving equity and affordability, and keep us on the path to prosperity.”

The mayor said the city crafted the budget with the expectations of a “perfect storm” as economic growth is slowing and city revenues are expected to fall. Despite job growth in the city recently outpacing the state and country, several mitigating factors are projected to hurt the city’s finances. Federal pandemic relief funds will run out by the end of the 2025 fiscal year. After a very rough 2022 for the stock market, Wall Street profits have slowed, affecting the city’s tax base. Real estate sales have fallen because of high interest rates and office vacancy rates remain high, negatively impacting property taxes. Municipal labor contracts have yet to be settled and could add billions to spending, the mayor noted, as negotiations are ongoing. Health care costs are increasing. And the arrival of tens of thousands of migrant asylum-seekers in the city has strained the budget further, with associated costs expected to be as much as $1 billion for the current fiscal year.

“We will still need to support the core services that New Yorkers depend upon every day, but with fewer resources,” Adams said, warning of slowing revenue growth.

The mayor’s preliminary budget is the first major step of the process to craft the next city budget. It will be the focus of a series of City Council hearings, and the Council will press for changes ahead of the mayor’s executive budget, due in April. That budget will likely come after passage of the next state budget, due by April 1, which will impact city finances. The mayor’s executive budget will be the subject of another round of Council hearings, followed by negotiations both public and private, and a city budget agreement between the mayor and Council due by July 1. Adams’ tenure as mayor has already been marked by significant budget conflict with the Council, including over his November modifications for the current fiscal year, which were broadly criticized by the Speaker, Adrienne Adams, and others.

The preliminary budget plan released Thursday by the mayor, a second-year Democrat, projected additional revenues of $1.7 billion by the end of the current fiscal year, creating a $2.2 billion surplus Adams is planning to use for pre-payments into the next fiscal year. There was also $738 million in additional projected revenue for fiscal year 2024.

There is little new spending in the mayor’s budget. Among the allocations highlighted by City Hall was $20 million to advance the mayor’s housing and homelessness plan, including assistance with down-payments for low-income prospective homeowners and expanded enforcement against tenant harassment; $2.8 million to streamline affordable housing projects; an additional $80 million (for a total of $160 million) to maintain Fair Student Funding; $2.6 million for the Department of Buildings to implement a citywide building code; $1.8 million to expand the city’s Neighborhood Rat Reduction Initiative into Harlem; and $1.62 million to hire chief decarbonization officers across city agencies.

The mayor said that new agency expense spending was covered by additional revenues and savings identified in the budget. Those savings largely came from a vacancy reduction initiative that cut more than 4,300 previously-budgeted vacancies across city government, cutting $181 million in costs in the current fiscal year and $350 million in FY24.

As he continues to face criticism over agency personnel shortages and his budgeting choices, Adams noted that more than 23,000 budgeted vacancies still exist at agencies, which gives them sufficient capacity to perform their duties. But he stressed that government retention and hiring remain challenges for his administration, the rest of city government, and beyond. He said his administration must continue to perform regardless.

“Some will argue that vacancy reduction results in agencies not being able to do their jobs. Don't believe them,” he said. The mayor has still not offered any new large-scale retention or recruitment policies, which his administration has said are in the works.

The preliminary budget also maintained city reserves at $8.3 billion, the highest level ever in city budgeting. That includes $1.6 billion in the general reserve, $4.5 billion in the Retiree Health Benefits Trust fund, $250 million in the capital stabilization reserve, and $1.9 billion in the Rainy-Day Fund.

Even prior to the budget release, the mayor faced significant criticism for proposing sweeping cuts to city agencies to rein in spending and close future budget gaps. At the time of the November budget plan, he mandated 3% cuts across the board for agencies to present savings plans to City Hall – though many agencies did not comply and were not held accountable. But the cuts that the mayor did move ahead will affect funding for city libraries, CUNY, early childhood education, and more, which has caused broad consternation among City Council members, leaders of impacted institutions, advocates, and constituents. Adams has insisted that most agencies and entities that rely on city funding can find savings and not reduce programming offered to New Yorkers.

“As our city continues to recover from the pandemic, we must prioritize smart investments that maintain essential services to keep all New Yorkers healthy and safe," said City Council Speaker Adrienne Adams and Council Member Justin Brannan, the Council’s finance chair, in a statement after the budget was released. "We also must prioritize solutions to the staffing challenges that have hindered city agencies in delivering key services to New Yorkers, such as housing and food assistance. To that end, many of our concerns with the Mayor’s November Plan remain with the Fiscal Year 2024 Preliminary Budget."

Ahead of the budget release on Thursday morning, Speaker Adams and Brannan had already announced that the Council would not be voting on the November budget modification by the January 20 deadline – a symbolic gesture to show the Council’s disapproval of the mayor’s budgeting. The modification will then automatically go into effect.

“The budget vision put forward by the Administration to cut funding for CUNY, libraries, social services, early childhood education, and other essential services for New Yorkers is one this Council cannot support,” Adams and Brannan said in a lengthy joint statement. “The city is facing multiple crises that require smart investments, and the approach in the November Plan only undermines the health, safety, and recovery of our city.”

They also took issue with the mayor calling on the City Council to cut millions from its discretionary funding, which is allocated annually to nonprofit human service providers that contract with the city. “We also reject the false choice in this budget modification of having to choose between cuts to city agencies or cuts to non-profit organizations providing services on the frontlines in our communities to underserved and vulnerable New Yorkers,” Adams and Brannan said, accusing the mayor of “undermining” city agencies and services “that meet the essential needs of all New Yorkers.”

They indicated that the Council would not vote down the modification because that could jeopardize millions of dollars in funding to nonprofits performing city services, among other uncertainties.

Taking questions from reporters after the budget presentation, the mayor projected harmony. “I have partners in every part of government and I consider Adrienne to be one of those partners,” he said. “I may be the pilot but she's the co-pilot and we have to land this plane and we can't land it without each other. And we're going to have disagreements but trust me, we will land this plane and we will have a budget.”

State Comptroller Tom DiNapoli said in a statement that the budget “takes an important step towards revenue transparency, allocating the remainder of federal pandemic relief and increasing projections based on year-to-date tax collections.” But he noted that the city failed to account for recurring costs of the migrant crisis, which the mayor hopes will be paid for via federal and state relief funds. “The city must lay out these and other risks transparently so that it may continue to plan and identify new ways to close these gaps without harming services, which would be counterproductive to the city, and state’s, economic recovery,” he said.

He also said the city “missed an opportunity” to add funds to reserves despite revenues coming in higher than expected.

City Comptroller Brad Lander offered his own mixed reaction to the mayor’s spending plan. In a statement, he noted that the mayor and Governor Kathy Hochul had recently laid out a vision for a ‘New’ New York. “Yet, rather than making investments upstream as that plan envisioned, this budget meanders with little direction,” he said in a statement.

He said that reserves remain insufficient to weather a recession, and that the city has failed to adequately budget for costs such as police overtime, housing vouchers, and union contract settlements. He also said vacancy cuts could affect crucial agency functions.

Lander also called on the mayor to support efforts in Albany to raise new revenues for the city, presumably through higher taxes on the wealthy, which Lander has called for in the past but Adams is generally opposed to. The mayor again expressed skepticism about increasing taxes on the wealthy on Thursday, saying he does not want to see top earners flee the city for other states.

“To confront both the economic uncertainty and inequality facing our city, New York City needs a budget that provides both a strong cushion to weather future blows and one that sets us up for long-term growth,” he said.

Andrew Rein, president of Citizens Budget Commission, a nonprofit fiscal watchdog, said the preliminary budget took some "positive steps" including reducing vacancies, maintaining reserves, making agencies self-fund new spending and avoiding major new spending initiatives. But, he stressed that "much more aggressive action is needed to stabilize future budgets, hedge against a looming recession, and improve the quality and efficiency of services. This should not be delayed." He urged the city to make additional deposits to the Rainy Day fund, prepare for the fiscal cliff from diminishing federal aid, and restructure city services to cut costs in the long term.

Also on Thursday, Adams released the updated ten-year capital strategy of $159.3 billion, including a series of new capital investments to pay for infrastructure projects.

Note- this article has been updated.