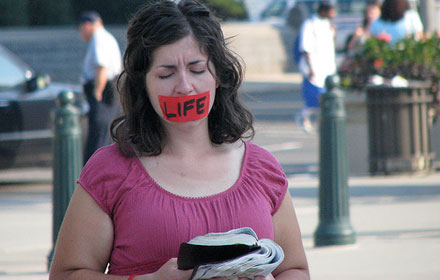 The bill will ensure patients are not threatened, followed or harassed when attempting to enter a clinic, supporters said. On the other hand, critics argue by supposedly strengthening access to clinics, the legislation cripples protesters' First Amendment rights.

In addition to the clinic access bill, the council approved its operating budget for fiscal year 2010, which starts in July, and passed several resolutions urging the state to act on rent regulation.

For patients looking for care at Dr. Emily's Women Health Center in the Bronx, the problems start when they get off the subway, say women's rights advocates. Patients are followed and greeted by supposedly inappropriate catcalls in an attempt to dissuade them from having an abortion. Sometimes, advocates said, protesters block the building's entrance so women looking to terminate their pregnancies don't have any other option but to turn around.

Just because there is a choice in New York City, doesn't mean that there is access, said city officials.

To provide that access, City Council approved legislation that would remove the need for intent to make an arrest, meaning a police officer could arrest protesters who they see harassing patients. Currently, said city officials, women seeking health care have to come forward for an arrest to be made. Many times, said Council Speaker Christine Quinn, women are too intimidated to come forward and identify harassers.

The legislation also would enable clinic workers to call and complain, which could lead to the arrest of protesters who block the clinic entrances or interfere with their operation.

The council voted to approve the bill (Intro 826-A) by a vote of 39 to 8. The mayor plans to sign the legislation, a spokesman said.

Any violation of the legislation would be a misdemeanor.

Many council members equated the legislation to a practical defense of Roe vs. Wade -- or a women's right to choose. Supporters said if protestors are peaceful, then no violation would occur.

Those who voted against the bill said it would erode free speech and create more ambiguity in the law.

"I do not want to protect or enable people who break the law and harass women seeking services," said Councilmember James Oddo, a Republican from Staten Island. "But I also do not want to pass a bill that might have the unintended consequences of having a chilling effect on other constitutionally protected speech."

The City Council also unanimously approved a $50.5 million operating budget for fiscal year 2010, a reduction of $1.7 million from the previous year or about 3.3 percent.

The reduction will not lead to any layoffs and is on par with the reduction for the mayor's office. Quinn said the council would cut down on events and printing and reduce staff size through attrition.

The council cut its central staff budget. Individual members' budgets will not be affected.

By repealing Urstadt, the city would have control over housing and rent policies, which it lost in the 1970s.

The council wants the state to repeal parts of vacancy decontrol to force thousands of formally regulated apartments back on the rent regulated rolls. Currently, any rent-regulated apartment is deregulated if its rent exceeds $2,000. Legislation in the state legislature would keep apartments under regulation until they reach a monthly rent of $5,000.