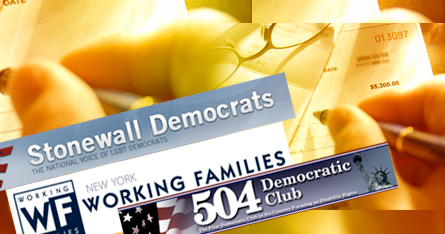 Just two candidates currently running for public advocate or city comptroller contributed to the Working Families Party last year, according to the Campaign Finance Board. Coincidentally, they were the same two candidates who received the party's endorsement.

Council members John Liu, a comptroller candidate, and Bill de Blasio, who is running for public advocate, each doled out $10,000 to the third party last October, both saying it to went to fight against the extension of term limits.

About six months later, though, their contributions may have been rewarded with an influential endorsement from the group, opponents allege. A Working Families Party spokesman said the donations did not curry any favor at the endorsement table. The group based its decision on merit, said spokesperson Dan Levitan, calling Liu and de Blasio brave for standing up against the term limit extension.

When the candidates made the donations, representatives say, they were running for different offices -- Liu for public advocate and de Blasio for Brooklyn borough president.

But like it or not, this is not the first (nor will it be the last) time political contributions from city candidates can be connected with the endorsements they receive months or years down the road. A long established practice, city candidates dole out funding from their campaign accounts to political groups and other New York politicians. Whether it's taking out an ad in a Working Families Party brochure, giving $500 to the re-election campaign of an influential assemblymember, donating $100 to the Stonewall Democrats or paying $135 to attend a luncheon held by the 504 Democrats, candidates for citywide office are making their rounds across the city via checkbook, and some expect payback.

No one may be looking for a reimbursement more than Liu, who in this election cycle has given 77 contributions, or $62,400, to political groups or candidates -- the most of any city candidate. During the 2005 cycle, when he was running for re-election to the City Council, Liu gave just five of these types of contributions, according to the Campaign Finance Board.

A Small Amount, But Large Paybacks

So far this election cycle, $346,440 has been spent by candidates on contributions to city organizations or other campaigns -- about 2 percent of the $14.5 million candidates have spent for the 2009 race so far.

Following Liu in handing out political contributions is Brooklyn Borough President Marty Markowitz with $42,700, councilmember and comptroller candidate David Weprin with $22,110, de Blasio with $14,750, and comptroller and mayoral candidate William Thompson Jr. with $12,965.

These officials have bestowed their campaign dollars on fellow candidates. For instance, comptroller candidate and Councilmember Melinda Katz contributed $300 to Councilmember Dan Garodnick, who is running for re-election.

Or they gave to local organizations, like the $1,000 Weprin gave to Young Israel of Holliswood this cycle.

And sometimes it seems to pay off.

In addition to the Working Families Party endorsement, Liu has seen a couple of other nods from groups that he has contributed to. Last December, the council member gave $1,000 to the Transit Workers Union Local 100 for an ad and tickets to a fundraiser. Little more than three months later, Liu received the local's endorsement -- the first of his campaign.

Liu also gave a $250 donation last year to the McManus Democratic Association in Midtown , and he won their support. (In 2006, Weprin also gave to the group.)

The Liu campaign contends he is trying to connect with constituents. Liu's campaign spokesperson Juanita Scarlett said, "John Liu has supported organizations that share his views and priorities on issues critical to middle class families in New York -- issues such as health care, education, jobs and economical development." Giving to Democratic clubs, she added, "allow[s} him the opportunity to connect with voters who are knowledgeable on priority issues."

But his competitors allege the contributions are not so clean.

"I think it's ironic that someone running for comptroller -- who we are supposed to evaluate on financial uprightness -- paid for an endorsement," said Katz campaign spokesperson Ben Branham.

Liu is not the only candidate who has received endorsements from groups or other officials they contributed to.

Public advocate candidate and civil rights attorney Norman Siegel was the only candidate in that race to give any money to the Central Brooklyn Independent Democrats last year, and he gave just $60. This year, he got their endorsement.

By the looks of it, candidates will continue the practice until this November and beyond. In 2005, candidates shelled out $708,895 as contributions to colleagues and political clubs across the city.

According to Eric Friedman of the Campaign Finance Board, candidates cannot use public funding to contribute to another candidate or a political organization. "CFB rules protect taxpayer funds from being funneled through one campaign to another," Friedman said. "Political contributions are not an acceptable use of public matching funds. But the law does allow candidates to use privately raised funds to make contributions to other candidates or political committees."

While good government groups are critical of the practice, they are not looking to ban it or regulate it further. Calling the donations "ethically dubious," Dick Dadey, executive director of Citizens Union, the sister organization to Gotham Gazette's publisher, said candidates will give to groups or other candidates in hopes of gaining support.

"It's a practice that can't and shouldn't be banned, but it's questionable and arguably distasteful," Dadey said. "The contributors give to candidates with the knowledge that candidates will do what is necessary to win elections."

Logically, any citywide candidate is going to spend millions of dollars in hopes of getting elected. So, according to Gene Russianoff at the New York Public Interest Research Group , candidates who send their checks to groups or candidates across the city in hopes of getting support see that as an effective political strategy.

"They are spending on this instead of direct mail," said Russianoff. "They are making a political judgment."

If they want to spend their campaign contributions on donations to other groups, the law won't be there to stop them.