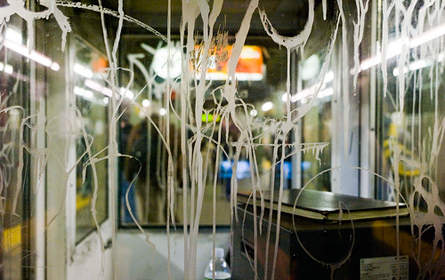 Carving out another obstacle for graffiti "vandals," the City Council approved legislation Wednesday that requires merchants who sell etching acid to keep purchasers' personal information for a year.

Its effects apparent on storefront windows and bus station vestibules, etching acid has become the "most destructive" of graffiti tools, said the bill's sponsor, Councilmember Peter Vallone Jr. Approved by a vote of 49 to 2, the legislation will fine store owners who fail to take down a buyer's name, address, type of identification, amount of acid bought and the date of purchases.

Also Wednesday, the City Council unanimously approved a bill to survey the city's wetlands and then create a preservation and development plan for them.

A common tool in art and construction, etching acid is a corrosive material used to carve out designs on glass or finish concrete surfaces. In New York City, an individual must be 21 years old to purchase etching acid, which can be found at art and hardware stores.

More recently, said the bill's supporters, it also has been used to deface public property. The Metropolitan Transportation Authority spends $11 million annually to replace windows scarred by etching acid, according to the City Council.

Officials estimate it can cost a storeowner $1,000 to replace a storefront window that has been etched and become a victim of "scratchiti."

"It destroys everything it touches, burns right down to the bone," said Vallone. His bill, he said, "will make vandals think twice."

To curb some of the vandalism, the legislation (Intro 380-A) would require personal identification be checked by the retailer and kept on file for a year. After a year, the information would be shredded, said Council Speaker Christine Quinn.

Keeping the personal information on file will act as a deterrent, said Quinn, but it also serves as a tool for law enforcement if they see scratchiti incidents skyrocket in certain areas. Police can then go to neighborhood retailers and determine who has been purchasing the product.

Retailers and buyers will be fined between $100 and $250 for violating the legislation.

The mayor is expected to sign the bill. Councilmembers Melissa Mark Viverito and Charles Barron voted against the measure. Barron, who called the bill "an intrusion into the lives of artists," said the city should consider more creative proposals, like community murals, to stop graffiti.

"We cannot turn this into a police state to stop graffiti," said Barron.

The New York Civil Liberties Union agrees. Robert Perry, the group's legislative director, said local retailers cannot be charged with safeguarding the personal information of consumers. That, he said, is not how to stop vandalism.

"If you want to prevent subway graffiti, prosecute the offenders," said Perry. "This is not a government agency like the DMV. You're talking about a retailer who is going to be collecting this information."

When asked if the civil liberties union would take the legislation to court, a spokesperson said the group would explore all of its options and monitor the law's enforcement.

The regulation of etching acid is the latest in a long history of anti-graffiti measures at the City Council, some of which have caught the attention of civil rights advocates and courts. Vallone, a notorious graffiti opponent, had tried to require permits for etching acid in the original version of the bill.

In the past, he also has attempted to ban the possession of wide-tipped markers and etching acid by those under 21. A federal court struck down the ban, and the legislation was later retooled to provide exemptions for artists and students.

To protect the city's dwindling wetlands, the council also approved a bill (Intro 506-A) requiring the city survey all of the five boroughs' remaining wetlands in order to develop a plan for protection and development.

At one point, the city had more than 224,000 acres of freshwater wetland. But now, said the bill's sponsor, Councilmember Jim Gennaro, it has just 2,000. Salt-water wetlands have also seen their numbers dwindle thanks to erosion, dredging, construction and filling. About 75 percent of the 100,000 acres have been eradicated.

This bill would require the Department of Environmental Protection identify all of the remaining wetlands by the end of July, and then draft a wetlands protection policy aimed at restoring the wetlands themselves and certain wild populations, from oysters to eelgrass.