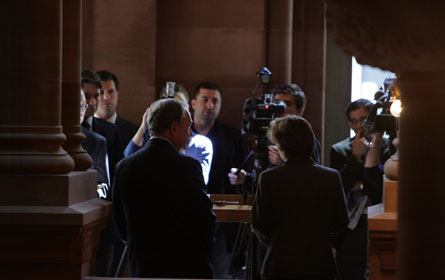 Photo by Spencer Tucker, nyc.gov
Mayor Bloomberg with Randi Weingarten (right) at an Albany meeting on mayoral control on March, 25

Could that be the deciding factor should the State Senate stalemate result in a permanent G.O.P. majority?

Since 2005, the mayor has given nearly $1.28 million to State Senate Republicans. He has given another $975,000 to the state's Republican Committee. Those campaign contributions could persuade a new Republican majority to swiftly take action on the remaining pieces of the Bloomberg administration's state agenda -- including several proposals that have deadlines of July 1.

The administration's top three priorities are getting an extension of mayoral control of schools, approval of its tax revenue package to fill a nearly $1 billion hole in its budget and the approval of a new pension tier that could save the city billions in the long run.

On his radio show Friday, the mayor said it doesn't matter who is in control of the State Senate. "The bottom line is I have to work with whoever is in charge," Bloomberg said optimistically. "We are going to need nonpartisan support for everything the city needs."

Whether it's Democrats, Republicans or even hobgoblins running state government, the city still has deadlines, budget deficits and thousands of students to take care of. We'll see whether this agenda can be turned into a reality amid all the turmoil. (For more on the turmoil in Albany, see our report from Albany.)

Keeping control of the city's public school system has been the mayor's number one legislative priority this year. On the surface, the switch in the Senate would seem to boost his chances, particularly as Assembly Speaker Sheldon Silver this week offered a proposal making only minor changes in the current, top down system of school governance. The mayor said he supported Silver's plan.

Over the years, Bloomberg's courting of Senate Republicans has angered many Senate Democrats, some of whom seemed to want to use the school fight to retaliate. Earlier this year, Senate Democrats issued a report calling for major changes in mayoral control -- essentially ending it. Although the Senate leadership quickly backpedaled, calling the report, which came from the office of Sen. Martin MalavĂ© Dilan, only a draft, it could not have made the mayor happy.

Billy Easton, executive director of the Alliance for Quality Education, which supports significant changes in mayoral control, said his group had been making progress in getting Senate Democrats to support those adjustments. "If Senate Democrats are in charges, we will secure changes beyond the Assembly proposal," he said.

On the other hand, renegade Democrat Pedro Espada has voiced support for mayoral control as has Dean Skelos, the Senate Republican leader. "We can get [mayoral control] done right away. We've seen the students' performance improve, " Skelos reportedly said.

But on Friday, it became apparent the Senate could not do anything "right away" as it remained mired in chaos, legal battles and backroom machinations.

"We can't pass a bill at all unless there's a functioning Senate," said State Assemblymember Brian Kavanagh. "The first step is for the Senate to meet."

Three scenarios have emerged. In one, the Senate gets its act together to vote on the issues. In all likelihood that would preserve mayoral control, perhaps with, as Silver recommends, a few changes to increase transparency and parental involvement.

On his radio show Friday, the mayor said he supported the Silver bill and expected it to pass.

A second scenario sees the Senate unable to vote on anything, June 30 comes and goes without a bill -- and the law sunsets at least for the time being. The mayor has, in the past, presented such an option in almost cataclysmic terms, warning of riots. His comments last week, while expressing concern, sounded a bit more measured. "Mayoral control of the schools is very problematic if you didn't have legislation in the next couple of weeks, because no one knows how you'd put the genie back in the bottle," he said.

While calling expiration of the bill "an unlikely scenario," Patrick Sullivan, the Manhattan representative on the Panel on Educational Policy, which has become the focus of much of the debate over mayor control, said "the sky will not fall." Instead, he said things would revert to the old law for the time being.

A third option would have the legislature, or maybe the courts, extending mayoral control for a brief period -- a year, perhaps, or until the fall -- when they would take the issue up again. This option has always hovered in the background, but seemed more likely in the wake of the Senate turmoil.

Talk about bad timing. The Senate coup d'etat came three weeks before deadline for the city's budget, which must be signed, sealed and delivered by July 1.

Two weeks ago, the City Council and the administration agreed on a $887 million tax revenue package, which includes a 0.5 percent increase in the sales tax and the repeal of a sales tax exemption for purchases more than $110. These proposals need approval from Albany.

But with Republicans in control, you might think that raising taxes won't be their first priority.

E. J. McMahon, the director of the Empire Center for New York State Policy at the Manhattan Institute, said the tax increases and the administration's other fiscal priorities would not be the first favor a Republican-led Senate has given the mayor.

"They have done things for him that they've never done for anybody," said McMahon, referring to the state's approval of paying off city debt in 2003. "It certainly doesn’t make his prospects worse."

Currently, according to a City Council spokesperson, Speaker Sheldon Silver and Assemblymember Herman Farrell have introduced the revenue package in the State Assembly, but no one has taken action yet in the Senate. Dan Weiler, a spokesperson for Assembly Speaker Sheldon Silver said, "The speaker and the Assembly majority are committed to addressing all the issues that we know must be addressed in timely fashion."

Though the city has agreed how to raise revenue, the administration and the council have not released a plan on spending cuts. Albany's stalemate may prevent them from doing so sooner rather than later, because the council is unlikely to approve an entire budget, including a controversial sales tax increase, in an election year if it is unclear whether the State Senate would do the same.

"It's not good," said Democratic consultant Hank Sheinkopf. "Budgets have to get done. Laws have to get passed, and when you have chaos nobody wins."

If the Senate stalemate continues and gets really close to the city's budget deadline, Council Finance Chairman David Weprin said the city would be left with little options, except for raising property taxes (which it can do without Albany's approval) or cutting spending further.

Both the mayor and the speaker of the council say they are confident they will have an "on-time" budget.

The final priority for the administration this session, according to Mayoral Spokesperson Marc LaVorgna, is the creation of a fifth pension tier for new employees, decreasing their benefits and possibly raising their retirement age.

The move would save the city $200 million this year and next, and is expected to save much more in the long run. That $200 million in savings was also included in this year's budget proposal.

A similar deal was drawn between the state's unions and the Paterson administration earlier this month, which could provide the city with some momentum to do the same, although the city's labor unions have balked at idea.

"The bill has been proposed and submitted to both houses," said Morgan Hook, a spokesperson for the governor's office. "It hasn't been introduced in either house. The governor has made it very clear that he wants to see the Senate get back to work, so they can act on this and other important legislation."

In addition to all of these issues, the city still has other unresolved issues it was hoping Albany would take up this year, include the repeal of Wicks Law, tort reform, and a pilot program for speed cameras.