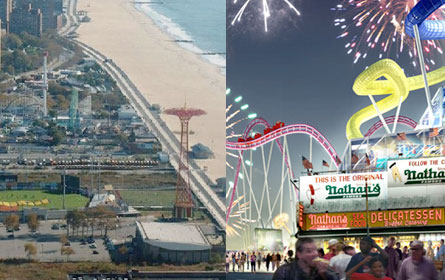 In an attempt to revitalize an area long known as "America's playground," the City Council approved a 27-acre redevelopment planto turn Coney Island into a year-round destination, full of retail, hotels and entertainment.

With both indoor and outdoor amusements, the controversial redevelopment, which was approved by a vote of 44 to 2 with one abstention, is intended to bring back the Coney Island circa 1930s when the area was flooded with vacationers and New Yorkers looking for sun and sand.

Council members Tony Avella and Charles Barron voted against the plan, saying it would take away Coney Island's character and the city did not factor in enough of the community's concerns. Rosie Mendez abstained.

In addition to the Coney Island redevelopment plan, the City Council also approved several bills to improve bike access in the city, including requiring bike parking in certain parking garages.

Morphing mostly vacant lots into parkland, the plan could include as many as four high-rise hotels along Surf Avenue and at least 10 acres dedicated solely for amusement. The amusement area will be a mix of indoor and outdoor entertainment, anything from arcades and freak shows to art galleries and restaurants.

Though the council has approved the plan, the deal is not entirely etched in stone yet. Much of the success of Coney Island depends on a potential deal with a local developer, Joseph J. Sitt, chief executive officer of Thor Equities. Thor owns several acres eyed by the city for the entertainment and amusement district. For months, the Bloomberg administration and the developer have been negotiating the price of the property, and at one point were considering a land swap.

Yesterday city officials appeared very close to an agreement with Sitt, which could allow the city to purchase six of Sitt's 10 acres.

In a statement yesterday, Stefan Friedman, a spokesman for Thor Equities, said: "Thor is continuing to work with the administration to ensure the best outcome for Coney Island. We are hopeful that these negotiations will result in a timely resolution and a brighter day for Coney."

Sitt had been involved in the redevelopment of Coney Island back in 2002, when the local councilmember, Domenic Recchia, asked for his help in revitalizing the all too often vacant amusement area.

Recchia, an ally of Sitt, had held up his own support of the project in part because the administration and the developer could not come to an agreement.

In response to the City Council's approval, Mayor Michael Bloomberg said in a prepared statement: "We’ve still got a lot of work to do in the days ahead. We have every reason to feel optimistic because we’re working aggressively to iron out the terms of deals with landowners. And we will also continue working with our partners in Albany to gain approval for the parkland legislation we need for the development to move forward."

"Not everyone got what they wanted. We tried to make as many people as happy as we can," said Recchia. Eventually, he later added, "we will see the world's greatest playground come back better than ever."

It is true that not everyone is happy. Community advocates from the get-go voiced concern over the amount of space dedicated to outdoor amusement. Pointing to the smaller rides that had taken up much of the space of Coney Island in recent decades, opponents of the plan, like the Save Coney Island coalition, were dismayed that it did not include more outdoor amusements, similar to the Cyclone and the Wonder Wheel -- both of which are included in the redevelopment.

At yesterday's council meeting, the balcony was full of protestors who held white signs saying, "Don't Save Coney Island. Fix the Plan."

Following the vote, Steve Peluso of Save Coney Island, wrote in an e-mail: "These flaws in the plan are obviously concessions to property owner Joe Sitt, CEO of Thor Equities, who invaded Coney Island under the pretense of building a new amusement park there, but instead transformed a large majority of the area into a blighted empty lot in hopes of bullying the city into buying him out or up-zoning his land. The City Council today played right into his hands."

Some council members agreed with them.

When voting against the plan yesterday, Barron said, "There are some people in Coney Island who are not settling. I've talked to grassroots groups who feel like Coney Island will be Cozy Island for the elite."

Currently, according to the Department of City Planning, out of 50,000 residents of the area about one in six live in New York City Housing Authority projects. At least 25 percent of the population is over 60 years old, and unemployment is twice the city's average.

The plan, according to city officials, will help turn those statistics around.

According to city officials, the amusement area will be surrounded by about 4,500 new residences, which at least 35 percent are slated for affordable housing. The original Coney Island proposal by the Bloomberg administration included only 20 percent affordable housing. About half of the affordable housing will have a home ownership option, said Council Speaker Christine Quinn. The city will set aside about $15 million for boardwalk reconstruction and $137 million to improve sewage and stormwater infrastructure in the area.

The second bill (Intro 780) will require parking garages with more than 100 parking spots provide parking spaces for bicycles. A bike spot would be mandated for every 10 vehicle parking spots, up to 200 spots.

Both bills were approved by a vote of 46 to 1, with Councilmember Erik Martin Dilan dissenting.

For the first two years, the bike parking bill will capture 650 garages and create 1,000 bike spaces, city officials said. After two years the bill will apply to garages of 51 or more spaces.

From Smoking to Pedicabs

Also on Wednesday, the council approved a bill (Intro 642) that will ban smoking on the grounds or within 15 feet of an entrance to a hospital, diagnostic treatment center or residential health care facility.

The council unanimously approved a bill (Intro 1031) that would regulate pedicabs, requiring every operator obtain a license and train its drivers.

Also unanimously, the council approved a veto override (Intro 992), which will allow every city employee to live in six surrounding counties after completing two years of employment. Currently, most employees must reside within the five boroughs permanently.