September 04, 2009 | by Miguel Soberanis and Courtney Gross
Twitter
IT news 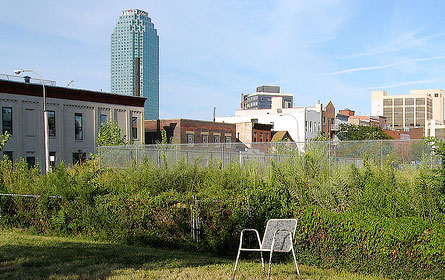 First there were five, including a VH1 reality television star who boasted about his candidacy on YouTube.

Then there were four, including a conservative Democrat who wanted to give vouchers for religious students to attend private schools.

Now, only three candidates are facing off to represent district 26, which covers Long Island City, Sunnyside, Woodside and Maspeth in Queens. This contest stars Democratic party-backed Deirdre Feerick, who is already inside City Hall as deputy director of the City Council's administrative services division; James Van Bramer, who has won the endorsement of the powerful Working Families Party and is the chief lobbyist for the Queens Public Library; and Brent O'Leary, a legal counsel for Bloomberg LP who casts himself as the "only grassroots candidate."

Like many races in the surrounding area, development, education and the floundering economy have taken center stage. But as these candidates duel over whom will replace Councilmember Eric Gioia, who is vacating the seat to run for public advocate, politics has also been thrust into the limelight.

Van Bramer's ties to the Working Families Party have been criticized, while Feerick has been chastised for challenging the petitions of two former candidates who were knocked off the ballot. Meanwhile, O'Leary hopes to use this politicking to his advantage.

What was once an area of of factories and industry is now spattered with high-rise condominiums and the Citibank Building. As the community rapidly gentrifies, some residents who claim over such projects have changed the district's character, caused rents to rise and failed to produce the kind of environment that developers promised.

These candidates are now grappling with how the city should deal with development moving forward and what to do about vacant or stalled projects that fell victim to the financial meltdown.

They all agree that developers need to acknowledge the resident's concerns before starting construction and that future projects must include space for schools and parks. They also all agree the district should have a mix of development -- from residential to commercial -- as long as it fits with the character of the community.

"The real crisis is that we're losing affordable units in the buildings that already exist." said Van Bramer, a man with salt and pepper hair who goes by "Jimmy." Van Bramer, who was endorsed by Tenants Political Action Committee and the League of Conservation Voters, charged that huge conglomerates buy up existing buildings and force tenants out by increasing the rent.

Van Bramer wants rent stabilization laws strengthened to protect current residents. In a possible reflection of his current job, he also insists that public libraries be included in areas like Hunters Point South, a large mixed-use development proposed for the district.

O'Leary sees development as an opportunity to spur affordable housing and "put a lot of construction workers and electricians to work, at the same time bring everyone's rent down." O'Leary says the city should "buy up" the vacant properties and turn them into affordable housing. If elected, he has also promised to post all of his conversations with lobbyists, including developers on the web along with development updates online, an effort he says will boost transparency.

Feerick, who has the most backing from Queens politicians including Gioia, calls stalled developments "silent sites." She also wants to turn them into affordable housing and said that, in their current state, they are unsecured and so provide opportunity for criminal activity..

She also said developers need to speak with current residents before they start building and that the city should provide the public with comprehensive information on development in their communities. "You shouldn't have to have a MBA in public administration to understand zoning laws," she said.

All the candidates support inclusionary zoning, which offers incentives for developers to include affordable housing in new developments. On top of that, they want to hold developers accountable for keeping rents low and setting aside the agreed upon number of homes.

As of July, Queens' storefront vacancy rate had reached 7 to 10 percent and was projected to go up to between 12 to 15 percent by the end of 2009.

While there is little a councilmember can do to fix the overall economic downturn, they did offer some ideas on how to lessen its impact.

O'Leary, who says his experience in international business is proof he is not connected to a "dysfunctional government system" like his opponents, has made economic development the linchpin of his campaign. Under his platform of "giving us a voice in our own community," he calls for monthly town hall meetings where small business owners and residents could meet with their City Council representative and voice their concerns.

O'Leary said he will try to put job placement centers in the district and would seek to bring down the cost of living in the neighborhood, starting with the cost of the subway. Even though the Metropolitan Transportation Authority is a state agency beyond the City Council's jurisdiction, O'Leary said he would lobby for merit-based pay for the authority's executives. If the fares go up, he adds, executives should get a pay cut.

Van Bramer, who has garnered the endorsement of some of the city's most powerful labor groups, like SEIU 1199, said if elected he would work to reduce class size and add afterschool programs, decrease truck noise and reduce graffiti.

"To me being a City Council member isn't about grabbing headlines or cozying up to political bosses," Van Bramer said on the city's video voter guide. "As a lifelong Democrat, I know that its about doing one thing: working for all of us."

Van Bramer may be a lifelong Democrat, but it's his connection with the Working Families Party that is bruising now. He is one of six City Council hopefuls whose expenditures are being eyed by the city's Campaign Finance Board after they contracted with the party's private consulting group, Data and Field Services.

The board has questioned whether candidates who received the party's endorsement and subsequently contracted with its private consulting firm are paying market rate for the firm's services. Feerick has filed a formal complaint against Van Bramer with the Campaign Finance Board .

On the other hand, both O'Leary and Van Bramer have fiercely criticized Feerick for filing objections to candidates' petitions with the city's Board of Elections. The challenges got the cintenders kicked off the ballot. Feerick defended her effort, saying election rules need to apply to everyone.

In this Democratic leaning district, the winner of the Sept. 15 primary is likely to cruise through the general election and into office next year. The primary winner will face Republican Angelo Maragos i November.